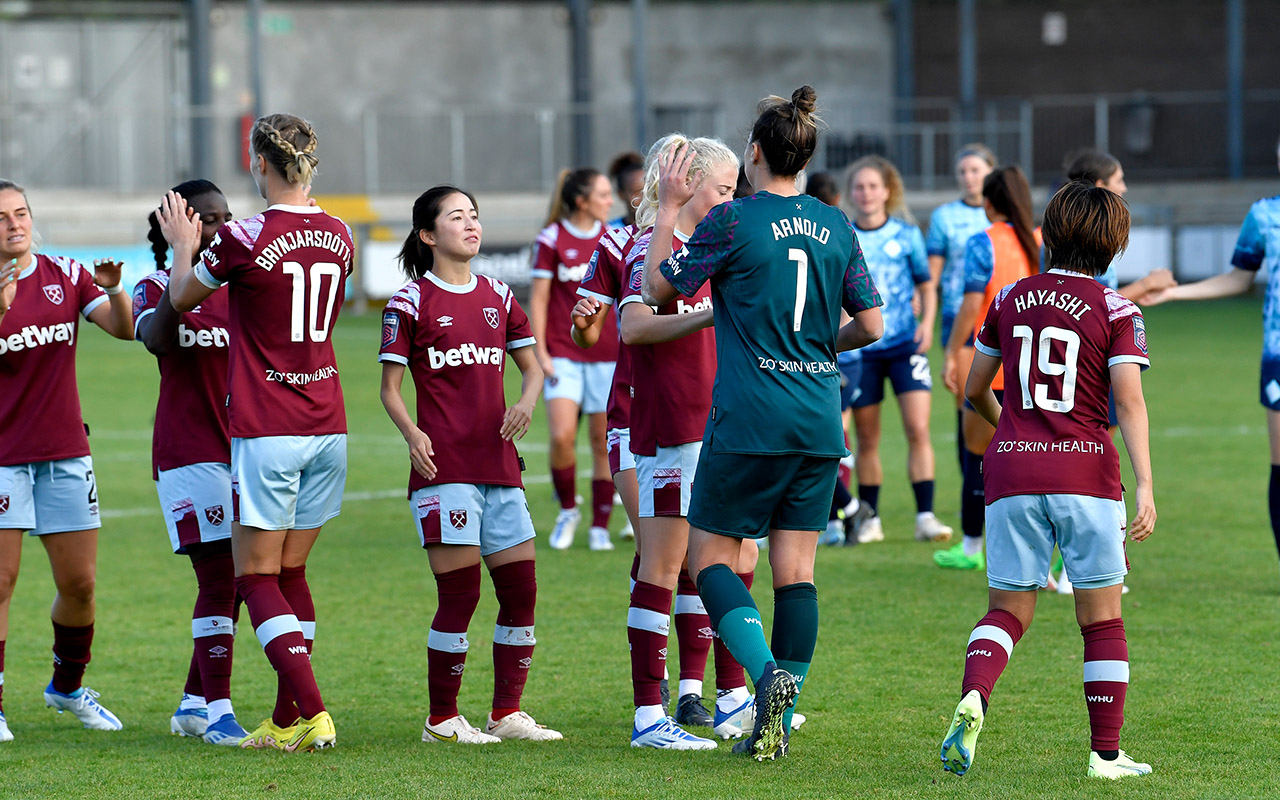 West Ham United Women picked up two points from their opening Continental Tyres League Cup match, as they were victorious in a dramatic penalty shootout that saw 26 penalties taken in total!

The Hammers found themselves two goals behind in the game after London City had scored in the first half through Lois Heuchan, and then in the second half from Sarah Ewens.

Viviane Asseyi scored her first goal in Claret & Blue, which seemed to reinvigorate her side – and Dagny Brynjarsdottir would head home an equaliser moments before the final whistle sounded, which would take the game to penalties.

In a quite incredible shootout, it would be Brynjarsdottir that would score the Hammers final penalty, with Lilly Agg blazing her follow-up over the bar to give West Ham the extra point and finish the shootout with the score at 10-9 in favour of the east London side.

Paul Koncheksy handed a full-debut to 17-year-old midfielder, Keira Flannery – who in the process became the Club’s youngest ever starter in a competitive fixture.

With four minutes on the clock, the Hammers worked a free-kick well, with Risa Shimizu receiving the ball out wide, before drilling a low and powerful cross into a good area.

Brynjarsdottir ran across the face of goal, but the referee cautioned the Icelandic midfielder for a foul on Lionesses goalkeeper, Shae Yanez.

Ewens had a chance for the hosts six minutes later, but she couldn’t generate enough power on the header after a good cross in from Lois Heuchan.

Claudia Walker was then presented with the best opportunity of the game so far, with the forward being denied from close range by a fantastic save by Yanez.

For all the Hammers’ early dominance, it would be the home side that would open the scoring in Dartford. A cross from Jamie-Lee Napier found Lois Heuchan at the back post, and the wing-back was able to stab the ball home.

Lucy Parker was then forced to be withdrawn after picking up a knock, with Lisa Evans coming on in her place.

Walker had another chance before the first half came to an end, but she couldn’t keep her chipped effort down.

Honoka Hayashi was introduced at half-time, slotting into central midfield was Konchesky looked for a way to get back into the game.

Things went from bad to worse for the Irons when a floated ball found the head of Sarah Ewens, and she nodded the ball beyond a helpless Mackenzie Arnold, who could only watch the ball nestle in the bottom corner.

The Hammers hit back almost immediately, with Asseyi ghosting in at the far post, and glancing a header beyond Yanez after some good work from Evans and Thea Kyvag on the right.

The intensity of the contest increased after the equaliser, but the Irons were struggling to break down a stubborn Lionesses defence.

Asseyi and Brynjarsdottir went close with efforts, but neither could make clean enough contact on the ball and the chance went begging.

Karin Muya was denied by Arnold late on, but it would be the Brynjarsdottir who would have the last say in normal time, heading a wonderful cross from Evans into the back of the net to force the tie to penalties.

Every player on the field had a go at taking a penalty, with an incredible 26 being taken in total. Agg would evntaully fire over to hand the Hammers the extra point and leave them in second in Group C after the first round of Conti Cup matches.