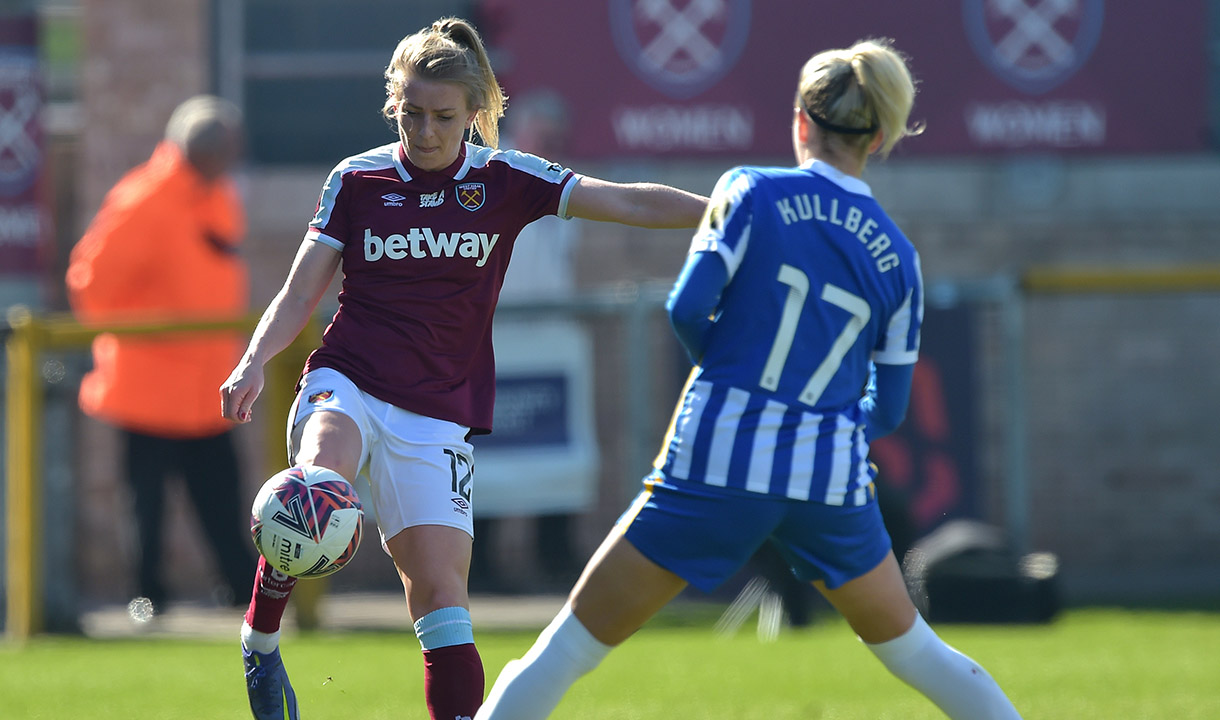 West Ham United were beaten for only the second time at home this season in the Barclays FA Women’s Super League as Brighton & Hove Albion ran out 2-0 winners.

An early goal from Aileen Whelan put the away side ahead, and despite a strong resurgence from the Irons, Inessa Kaagman’s late goal after a mistake at the back sealed all three points for the Seagulls.

Olli Harder named an unchaged side from the previous league outing, a 1-1 draw against Manchester United on the 16 March.

It was a nightmare start for the Hammers in east London, as Whelan found space on the edge of the area and placed the ball beyond Mackenzie Arnold with only two minutes on the clock.

And the pressure continued from the away side, as Kaagman was afforded time on the edge of the box, but the final ball from the Seagulls was cleared away by Grace Fisk.

It took Olli Harder’s side twenty minutes to create their first real opening. A bobbling ball fell through into the path of Brynjarsdóttir, but her effort on goal was blocked superbly by Danique Kirkdijk. The follow-up attempts from Kate Longhurst flew well over the crossbar.

Things improved for the home side as they started to look after the ball a little bit better than they had done in the opening stages. A wonderful cross-field ball from Yui Hasegawa set up the chance for Tameka Yallop to fire a ball into the area, but the cross was well claimed by Katie Startup.

Another fantastic ball, this time from Abbey-Leigh Stringer found Kateřina Svitková with room to run in behind. Her ball across found Yallop, who forced Startup into a good save.

Kaagman tried to catch Arnold out from a long-range free-kick, but the Australian goalkeeper managed to push the all over the bar.

Danielle Carter almost doubled the away sides lead just before the break, but her header didn’t trouble Arnold, as Brighton went into the break with the lead.

In the second half, it was Carter who was looking lively, forcing Arnold into another smart save down to her left-hand side.

Yallop was heavily involved in everything good for the Hammers, and probably should have got her side back in the game when Adriana Leon found her with a wonderful cross, that she could only head wide.

But Brighton continued to cause problems, and almost had their second of the game when Megan Connolly smashed an effort off the crossbar after some poor play at the back.

The game turned transitional, with both sides looking to get onto the front foot at any opportunity. Longhurst stood up a lovely ball for Brynjarsdóttir to attack, but Startup was able to push the Icelandic midfielder’s header behind.

Emma Koivisto nearly got herself on the scoresheet, but couldn’t make a clean connection on a ball whipped in from the right.

But it would be a mistake at the back that would undo all of the hard work that West Ham United had put in to try and get back into the game.

A loose backpass from Cissoko caused confusion at the back, leading to Arnold and Grace Fisk to go for the same ball - with it eventually falling to Kaagman, who slotted into an empty net.

And that would be one of the final attacking moments in the game, as the Hammers slipped to defeat.