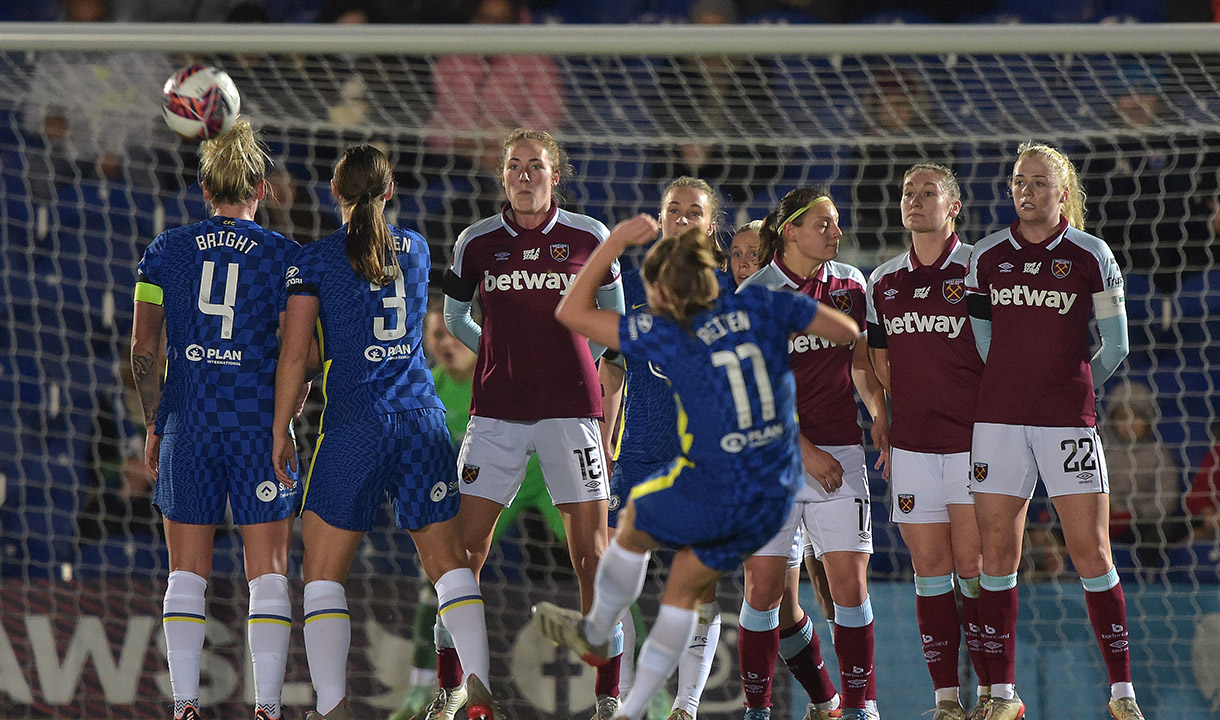 After battling hard in the first half, and creating a number of chances of their own, West Ham United would have been pleased with their showing in the opening 45 minutes, going in level at 0-0.

But Beth England came off the bench as the second half began and immediately put the Blues ahead, following in after Anna Leat had saved from Erin Cuthbert.

And Cuthbert put the game beyond the Hammers in the 82nd minute when her deflected effort found Leat's bottom corner, much to the Hammers' misfortune.

Mel Filis, Emma Snerle and Hawa Cissoko all started for Olli Harder in the London derby as the manager made three changes from Sunday's 3-0 win over Everton.

Dagny Brynjarsdóttir missed out through illness, whilst Abbey-Leigh Stringer and Gilly Flaherty were both named on the substitutes' bench.

Perhaps as expected, Chelsea were the team to see most of the ball in the opening exchanges, but it was the Irons who created the first real opening of the game. Kate Longhurst found Snerle with a good pass, but the Danish midfielder was unable to pick out anybody in Claret & Blue.

In the seventh minute, play was paused as both sets of fans applauded Isla Caton, who sadly passed away on Tuesday, and former ChelseaTV employee Richard Bignell, who also passed away recently.

Amidst the early exchanges, Leat did well to deny Pernille Harder from opening the scoring for the Blues, as the New Zealander got down well to keep the Dane's shot out.

Leat was certainly the busier of the two keepers, but Ann-Katrin Berger was called into action between Chelsea's posts on 16 minutes, racing out to beat Claudia Walker after the forward had sprung the offside trap.

And despite the early dominance from Chelsea, Harder’s team settled into a rhythm, looking to counter-attack with the pace of Lisa Evans whenever the opportunity arose.

Chelsea temporarily disrupted that period of positivity when Cuthbert blazed over from just inside the area on 25 minutes, but the Irons were still testing the Chelsea goal themselves. Kateřina Svitková went close with a fierce free-kick which looked destined to end up in the back of the net.

The pace of the game began to slow as both teams headed towards half-time, but Leat had to be alert to keep a Sophie Ingle header out, especially as Harder was lurking with interest.

And Harder looked intent on finding the back of the net on a cold evening at Kingsmeadow, but another chance went begging for the forward. The combination of Lucy Parker and Kate Longhurst did enough to put her off whilst climbing to head the ball towards goal as it spun harmlessly wide of the target.

In the second half, Chelsea boss Emma Hayes played her first trump card, bringing England off the bench. Within six minutes, the forward had the game's opening goal, as she followed in after Leat had initially kept out an effort from Cuthbert

From then on, Chelsea stepped on the gas, with a marauding England looking to add a second, but her shot was closed down well by Cissoko.

A mistake from Claudia Walker almost presented Harder with another opportunity, but some superb defending from Grace Fisk stopped the forward in her tracks, and Cissoko was able to clear.

However, the pressure from the home side eventually told late on, with Cuthbert adding a second for the Blues with less than ten minutes to play.

It ended in a brave defeat for the Hammers, who will now turn their attention to a trip to Sheffield United in the Vitality Women's FA Cup on Sunday 30 January 2022.