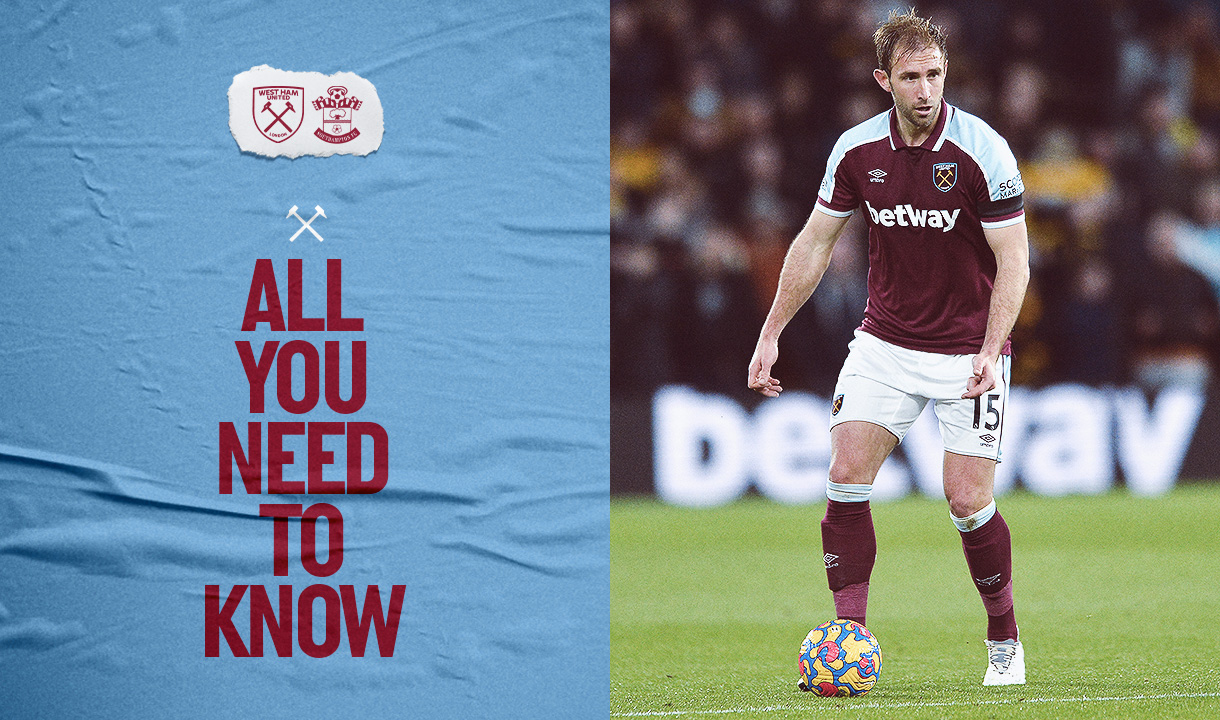 West Ham United v Southampton - All You Need To Know

West Ham United return to Premier League action on Boxing Day with the visit of Southampton to London Stadium.

The Hammers will host the Saints in the Club's final home game of 2021 seeking to maintain a place in the top five and just a second victory in the last seven top-flight fixtures.

West Ham's most-recent Premier League match at home to Norwich City, scheduled for Saturday 18 December, was postponed at the Canaries' request following a COVID and injury outbreak at the Norfolk club.

Despite that postponement and our recent dip in results, West Ham still go into Christmas in the top five for the first time since the 2014/15 season, when Sam Allardyce's side enjoyed their turkey and trimmings in fourth place.

Southampton, meanwhile, go into the festive season 15th in the Premier League table and without a win in their last six top-flight matches.

The reverse fixture played at St Mary's Stadium in September ended in a goalless draw, but West Ham have won the last four Premier League meetings between the two clubs at London Stadium, scoring three goals in all four of those victories.

Tickets are still available for our Boxing Day fixture. Secure your seat now by clicking here.

Tickets are on General Sale for our home Premier League fixture with Leeds United on Sunday 16 January now. Click here to be there in-person for the visit of Marcelo Bielsa's Peacocks to London Stadium.

A General Sale for our home Emirates FA Cup third-round tie with Leeds on Sunday 9 January will begin at 11am on Christmas Eve. Tickets for that tie are already on sale to Bondholders, Season Ticket Holders and Claret Members at reduced prices, while Club London hospitality packages are also available here.

Kick-off on Boxing Day is at 3pm and the game will not be broadcast live on television in the UK. However, if you are based overseas, you might be able to watch the game in your territory. Click here for overseas broadcast listings.

We will also be covering the game live with a blog and audio commentary on whufc.com and our Official Appand across our social media channels, with goals, highlights and exclusive reaction to follow after the final whistle.

Inside our Boxing Day issue, Arthur Masuaku shares the story of his unlikely rise from the streets of Lille's inner-city Fives quarter to the Premier League, via Lens, Valenciennes and Athens.

Former West Ham and Southampton striker Iain Dowie shares his standout memories of his stint in Claret and Blue in My West Ham Scrapbook, while author Greg Lansdowne shares the story of the Hammers and the Saints in Panini stickers.

Ken Dyer's regular column features an interview with Boxing Day hero of yesteryear Carlton Cole, while there are also updates from the Club's thriving Academy and Women's teams, plus a guide to our Boxing Day visitors from Hampshire.

With columns penned by manager David Moyes and Club captain Mark Noble plus much more, there is content for everyone in the Official Programme!

David Moyes will welcome Vladimir Coufal back from a one-game suspension, but the West Ham United manager will definitely be without Kurt Zouma (hamstring tendon) and Angelo Ogbonna (knee).

Southampton have had a shortage of goalkeepers in recent weeks, and Alex McCarthy remains out with a thigh injury, but Fraser Forster could be back after recovering from a groin problem.

Scotland midfielder Stuart Armstrong and namesake Adam could both return from lower-leg injuries, but Che Adams is reportedly still struggling with a thigh problem.

It is 136 years since Southampton FC was formed as St. Mary’s Y.M.A. by members of the Young Men’s Association at St Mary’s Church, just east of the city centre.

The club changed its name to St Mary’s FC in 1887, then Southampton St Mary’s on joining the Southern League in 1894, then finally to Southampton FC on winning the title for the first time and becoming a limited company in 1897.

Southampton FC went on to win the Southern League on five more occasions, while also moving into a permanent home in 1898 at The Dell, where they would remain for 103 years before moving to the purpose-built St Mary’s Stadium in 2001.

Nicknamed ‘The Saints’ in recognition of their ecclesiastical origins, Southampton joined the newly formed Football League Division Three in 1920, won promotion in their first season and remained in Division Two until being relegated in 1953.

After being promoted in 1960 and again in 1966 – largely thanks to the prolific goalscoring exploits of Scottish forward George O’Brien and local lad and future England international Martin Chivers – Southampton enjoyed their first eight-season stay in the top-flight.

The 1970s saw the Saints relegated again, but it was during this four-year spell in the Second Division that the club won its first and, so far, only major trophy, shocking Manchester United to win the FA Cup in 1976.

That success was achieved under the management of long-serving manager Lawrie McMenemy, who remained in charge for 13 seasons between 1973-85 and later returned for a stint as Direct of Football in the 1990s.

By then, Southampton had become founder members of the Premier League in 1992, with the club’s famed Academy producing a succession of future stars including Alan Shearer and Matthew Le Tissier.

That tradition has continued over the past few decades, with the likes of Theo Walcott, Gareth Bale, Alex Oxlade-Chamberlain, Adam Lallana and current captain James Ward-Prowse all coming through the club’s ranks.

Southampton did drop out of the Premier League in 2005 and even down to League One in 2009, but they bounced back with successive promotions in 2011 and 2012 and have been a Premier League club ever since.

It continued a period of upward progression for the Saints, who had been promoted automatically ahead of the Hammers in 2012, then finished eighth, seventh, sixth and eighth in 2014, 2015, 2016 and 2017 respectively.

Since then, however, Southampton’s momentum has slowed, with the Hampshire club finishing in the bottom half of the Premier League in each of the last four seasons.

West Ham are on an eight-match unbeaten run against the Saints in the Premier League, winning six of those matches. The reverse Premier League fixture this season ended in a goalless draw in Hampshire in September this year.

Former Saints forward Michail Antonio scored the first of his 50 Premier League goals for West Ham in a 2-1 home win in December 2015.

The Hammers' biggest Premier League win over Southampton was a 4-1 victory at the Boleyn Ground on 20 October 2012, a game in which Mark Noble scored two of his career-high five goals against the same opposition (he has also scored five times against Watford).

West Ham also lead the all-time stats against the Saints, winning 19 of the previous 39 meetings between the clubs in the Premier League, Football League and FA Cup. Southampton have won eleven, with nine draws.

In all competitions, the Hammers' record win over the Saints came back in October 1913, when they were 5-1 Southern Division victors at the Boleyn Ground.

match referee will be Kevin Friend.

Born in Bristol but brought up and now based in Leicester, Friend celebrated his 50th birthday in July.

Friend has refereed West Ham United on 23 occasions previously, with the first being the 5-0 Championship win over Plymouth Argyle at the Boleyn Ground in February 2005.

His first Premier League appointment involving the Hammers was a 0-0 home draw with Blackpool in November 2010.