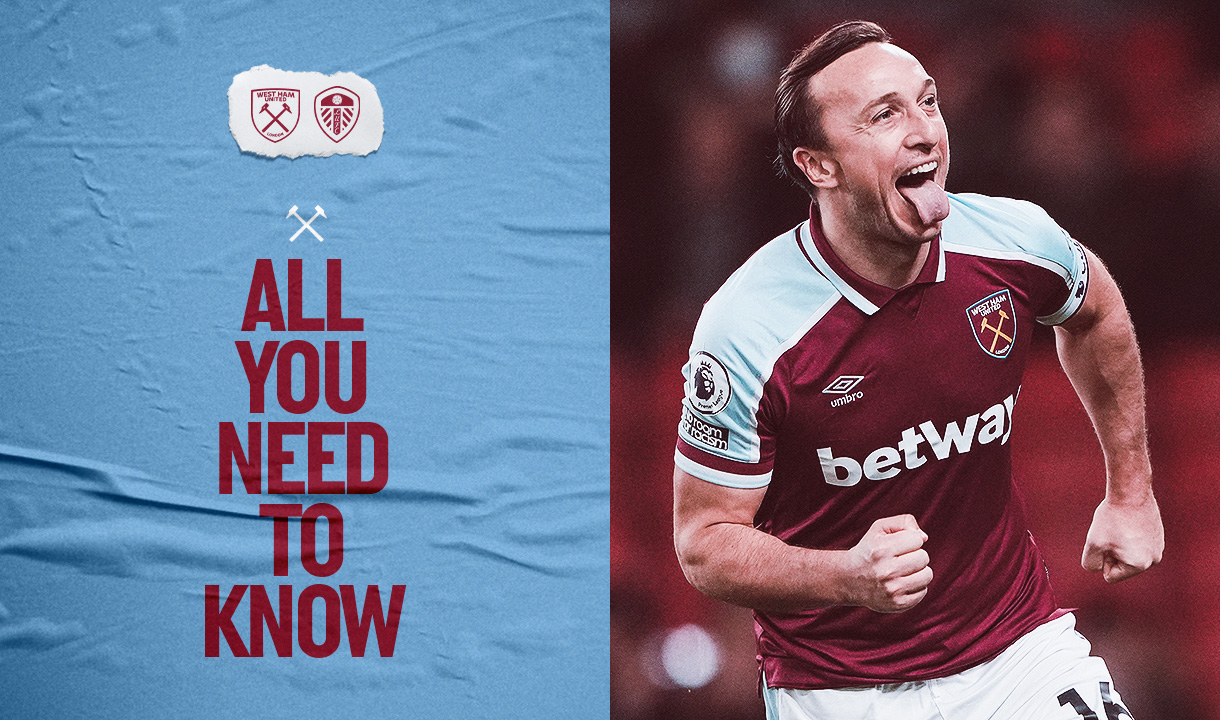 The tie will see the Hammers take on Premier League opposition as we start our quest to win the world's most-famous cup competition for a fourth time, having previously lifted the trophy in 1964, 1975 and 1980, and finished as runners-up in 1923 and 2006. Our opponents Leeds have won the FA Cup just once, exactly 50 years ago in 1972.

We go into Sunday's tie on the back of consecutive Premier League victories at Watford (4-1) and Crystal Palace (3-2), results which pushed David Moyes' side back into the top five in the table.

Marcelo Bielsa's Leeds, meanwhile, ended a run of three Premier League defeats with a 3-1 home win over Burnley at Elland Road in their most-recent fixture, played on Sunday 2 January.

This will be just the third time the two clubs have met in the FA Cup, and the first in 92 years! Previously, Leeds prevailed 1-0 in a second-round replay in February 1924 and West Ham won 4-1 in a fourth round tie in January 1930, with Vic Watson scoring all four goals for the Irons.

This weekend's winners will go through to the fourth round, the draw for which will be made at 4.50pm on Sunday 9 January and will be broadcast live by ITV1 and on the ITV Hub.

Tickets are still available for Sunday's Emirates FA Cup third-round tie, with prices starting from just £10 for Adults and £1 for U16s. Secure your seat now by clicking here.

Tickets are also on General Sale for our home Premier League fixture with Leeds United on Sunday 16 January now. Click here to be at London Stadium for that game.

Face coverings are now a legal requirement in all indoor areas, including on the concourses, except when eating and drinking or sat at a table. We would also strongly recommend wearing face coverings while seated in the stands. If you’re exempt from wearing a face covering you may wish to show a recognised exemption according to Government guidelines.

We would encourage supporters to arrive at least one hour before kick-off wherever possible, with all supporters aged 18 and over prepared to show a valid form of NHS COVID-19 certification ahead of entering the stadium on a matchday. Download and register with the NHS App to generate an NHS COVID Pass. For further information and guidance on COVID-19 certification, click here.

In line with Emirates FA Cup regulations, Leeds United are entitled to receive a larger allocation of tickets for this match, with 8,500 visiting supporters expected to be in attendance. For some of our supporters, this requirement may result in changes to usual routes around the stadium and access to some of our matchday services and facilities.

The Club has worked with stadium management to minimise the impact this will have for our supporters ensuring that all services and facilities are still available, subject to these changes.

Our game against Leeds United is another opportunity to show the positive, passionate support that make our proud fans famous around the world. Every supporter who attends a match at the London Stadium is an ambassador for West Ham United, and it is paramount that their behaviour reflects the values and standards that we uphold as a Club.

Changes to routes and services for this game

Supporters looking to visit the Stadium Store before the match will be able to gain access by arriving via the following routes. The Stadium Store will be open from 10am, but will not be open after the match on Sunday.

The Main Ticket Office situated alongside the Stadium Store will not be in use for this match as it is located outside of the visitors section, with Leeds United opting to take a larger ticket allocation in line with Emirates FA Cup regulations.

For any matchday ticketing queries and assistance, supporters should visit the North Ticket Office located between turnstiles J and K. To view a map click here. The Ticket Office is also open to receive telephone enquiries. We would encourage supporters to call us wherever possible to avoid any unnecessary queues on matchday. Lines are open Monday to Friday, 9am-5pm, Saturday 10am-4pm, and on matchday from 9am-kick-off.

The area outside of turnstile D and E will be closed after the match in order to provide safe walking routes from the stadium for both home and visiting supporters. Alternative routes are available to supporters after the match to reach all of the surrounding train stations, though we would advise that this could add 5-10 minutes to your journey time.

Bottles are not permitted for this game

Stadium management have introduced the new safety measure to prohibit bottles from being brought into London Stadium to protect the health and safety of all supporters, staff and players. This only applies for specific matches, where members of the Safety Advisory Group, including the Club, stadium management, local authority and the Police. Unfortunately this applies to all bottles of any size, however, please be assured that there are very few matches throughout the season which are classified in the higher category. Water fountains are in place around the concourse for supporters.

The Club would like to reassure supporters that these changes are not generally in place for our home matches at London Stadium, however, they are necessary in order to provide a safe and enjoyable environment for all supporters on Sunday. We thank you in advance for your patience and understanding.

There are some service disruptions that supporters should be aware of on Sunday 9 January:

No service on the entire line. Use alternative Tube services

Kick-off on Sunday is at 2pm and the game will be broadcast live in the UK by ITV1 and the ITV Hub. If you are based overseas, you might be able to watch the game in your territory. Click here for overseas broadcast listings.

With London Stadium set to play host to 60,000 fans for our latest exciting fixture of an exciting 2021/22 season and our first home match of the New Year, we have produced another 116-page issue crammed full of exclusive interviews and exciting content for fans of all ages!

David Moyes will definitely be without Kurt Zouma (hamstring tendon) and Angelo Ogbonna (knee), while Aaron Cresswell (back) has also been sidelined in recent weeks.

Saïd Benrahma is also unavailable as he has joined up with the Algeria squad ahead of the CAF Africa Cup of Nations, which kicks-off in Cameroon this weekend.

Both VAR and Goal line technology will be in operation for Sunday's tie.

NINE Substitutes can be named of which five can be used (different from Premier League). Clubs have three occasions during open play to make substitutions (excluding half-time) – multiple substitutions can be made during each occasion.

Each Club shall also be permitted to utilise up to two ‘concussion substitutes’, as appropriate.

It is 50 years since Leeds United won the FA Cup for the first and only time in the club’s 103-year history.

The Whites’ 1-0 win over Arsenal in May 1972 was settled by a header from Allan Clarke, the legendary England international centre-forward who had also scored in Leeds’ Fairs Cup – now UEFA Europa League – final victory over Italian giants Juventus a year previously.

Aside from being their first success in the world’s most-famous knockout competition, the 1972 FA Cup final was an historic event for the Yorkshire side for another reason – the club’s now world-famous anthem ‘Leeds! Leeds! Leeds!’ (also known as ‘Marching On Together’) was the B-side to Leeds’ FA Cup final song.

The record stayed in the UK Singles Chart for nearly three months, peaking at number ten and half a century later, it is played just before kick-off before every Leeds home game at Elland Road, and will undoubtedly be heard repeatedly from the visitors’ section at London Stadium this afternoon!

The release of ‘Leeds! Leeds! Leeds!’ and the club’s maiden FA Cup victory came during by far the most successful period in their history.

As was the case with West Ham United, who appointed the visionary Ron Greenwood in the same year, the arrival of a new manager in 1961 changed the course of the club’s history.

Former forward Don Revie was initially made player-manager with Leeds struggling in the Second Division, in financial difficulty and battling for relevance in a city steeped in rugby league tradition.

To put the situation in perspective, Leeds had lifted just one trophy – a Second Division title won in 1923/24 – since the club had been elected to the Football League in 1920.

Revie immediately set about changing the culture, demanding more of his players and introducing higher standards across the board.

Within three years of his appointment, Leeds had won the Second Division title, losing just three matches, and finished as runners-up in the First Division in both 1964/65 – a season they also lost in their first FA Cup final appearance to Liverpool – and 1965/66.

In 1968, Leeds won their first major trophies, the League Cup and Fairs Cup, before rampaging to their maiden League title the following year, losing just two of 42 First Division matches.

Three more second-place finishes and the aforementioned FA Cup final victory – either side of defeats in the 1970 and 1973 finals – followed before Revie signed-off 13 years in charge with a second title win in 1973/74.

As a side note, while Leeds had carried almost all before them, it did not always go to plan under Revie’s management – in November 1966, Geoff Hurst and John Sissons plundered hat-tricks as West Ham scored a sensational 7-0 victory over the Whites at the Boleyn Ground in the League Cup fourth round.

Following Revie’s departure to become England manager (he was succeeded by Greenwood in 1977) Leeds’ successes have come more sporadically. Jimmy Armfield led Revie’s team to the 1975 European Cup final, where they lost to Bayern Munich, and Howard Wilkinson took Leeds to the club’s third League title in 1991/92.

Since then, though, Leeds have endured ups and downs, being relegated down to League One in 2006/07 before finally climbing back to the Premier League in 2019/20.

Whether Leeds can ever regain the heights they reached under Revie is unlikely but, whatever they do, today’s visitors will do so ‘Marching On Together!’.

Sunday's third-round tie is just the third time the two storied Premier League clubs have been drawn to face one another in the FA Cup, with Leeds prevailing 1-0 in a second-round replay in February 1924 and West Ham winning 4-1 in a fourth round tie in January 1930, with Vic Watson scoring all four goals.

Attwell began refereeing seriously following his graduation from Stafford University and worked his way up through the West Midlands League and National League before joining the Football League list of referees in 2007.

The 38-year-old has refereed West Ham United 16 times in total since April 2008, including the 2-2 home draw with Crystal Palace and 1-0 win at Everton in the Premier League earlier this season.