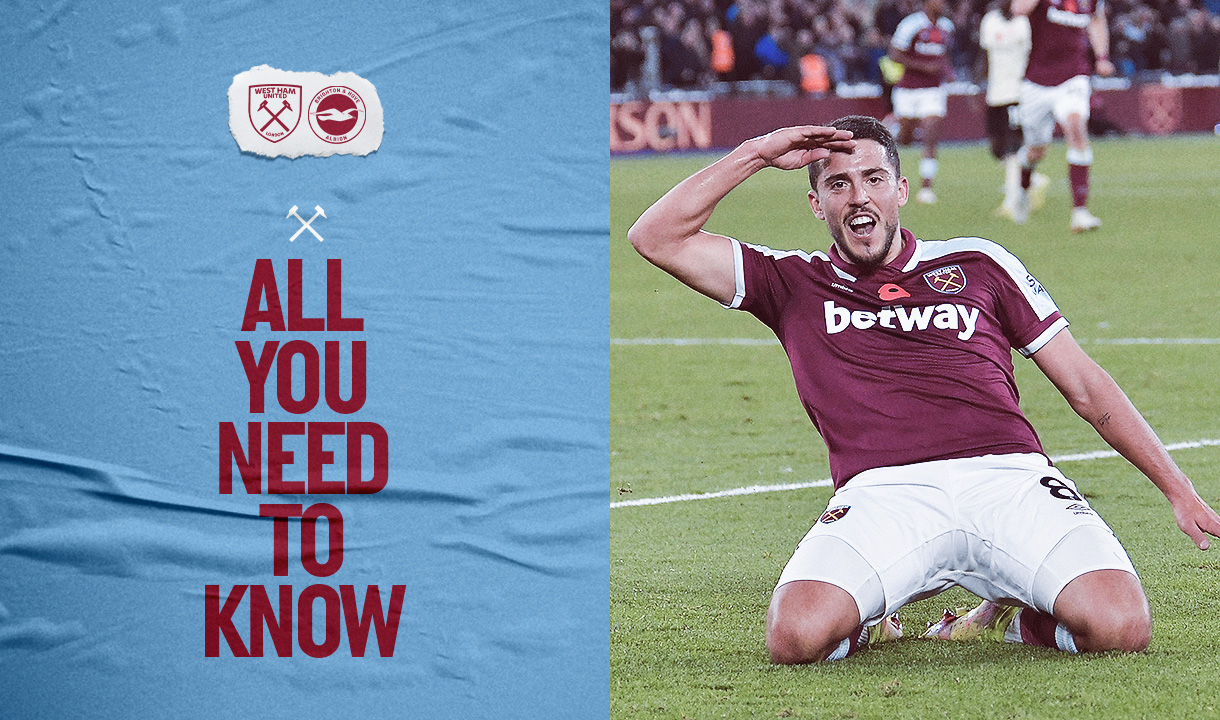 West Ham United kick-off a busy December with the visit of Brighton & Hove Albion to London Stadium in the Premier League on Wednesday evening.

The Irons welcome the Seagulls to Stratford for the first of nine matches to be played in the final month of 2021, seeking to bounce back to winning ways in the Premier League.

Despite those setbacks, West Ham sit fourth after 13 matches with 23 points and are one of just four Premier League clubs with a positive goal difference.

Brighton, meanwhile, are ninth with 18 points, but have failed to win any of their previous eight Premier League matches, drawing six and losing two.

West Ham have famously never beaten the Sussex side in the Premier League, losing the first three meetings before drawing five in a row, including both games last season - 2-2 at London Stadium in December and 1-1 at the Amex Stadium in May.

West Ham United will be marking Rainbow Laces in partnership with the Premier League and LGBT+ inclusion charity Stonewall.

We will ensure everyone within and all those connected with our Club, including supporters, feel safe and welcome, irrespective of sexual orientation or gender identity.

To find out more about how the Club is promoting equality and diversity, click here.

Wednesday's kick-off is at 7.30pm GMT. The game is being shown live in the UK by Amazon Prime Video.

David Moyes is hopeful Aaron Cresswell will recover from the back injury he suffered when colliding with the goal post at Manchester City on Sunday in time for Wednesday's game.

Again, the Scot is likely to only be without Angelo Ogbonna, who is continuing his rehabilitation after undergoing surgery on a cruciate knee ligament injury.

Brighton boss Graham Potter could recall Irish centre-back Shane Duffy and Zambian midfielder Enock Mwepu to his starting XI after both were left out at home to Leeds United on Saturday.

Midfielder Adam Lallana and winger Solly March could also be handed starts as Potter seeks a first victory since defeating Leicester City 2-1 at home on 19 September.

For such a well-run, stable football club, there is a certain irony that Brighton & Hove Albion is owned by a man who initially made his fortune in gambling.

A former City trader, Bloom has used his mathematical skills to make money – lots of money – wherever he has been and, since initially investing in the club in 2000 and taking ownership in May 2009, has spent a fair amount of it building Brighton into a Premier League football club.

Bloom, whose grandfather Harry served as the club’s vice-chairman in the 1970s and uncle Ray has been one of the club’s directors since the 1980s, personally financed the building of Brighton’s smart, modern stadium and state-of-the-art elite football performance centre, which opened in 2011 and 2014 respectively.

Bloom has also built Brighton into a successful side on the pitch, too.

When he took charge 12-and-a-half years ago, Brighton had just finished 16th in EFL League One, with only a late-season surge securing safety on the final day of the 2008/09 season.

Two years later, under the management of Gus Poyet and fired by the goals of West Ham United nemesis Glenn Murray, the Seagulls soared to the League One title and promotion to the Championship.

Six seasons and a succession of near misses – including three Play-Off semi-final defeats – later, Brighton famously won promotion to the Premier League for the first time in 2017.

Since then, the Seagulls have flown lower than Bloom would have liked in the Premier League table, never finishing higher than 15th in each of the previous four seasons but, considering the level of competition at this level, staying up for five years is a considerable achievement.

There are now real signs that Brighton are ready to take the next step and challenge seriously for a top-half finish under their well-respected head coach Graham Potter.

Like his Chairman, the 46-year-old is a shrewd and considered character who completed an MA in leadership and emotional intelligence at Leeds Metropolitan University before spending seven successful years leading little-known Östersunds FK from the Swedish fourth tier to the UEFA Europa League.

After a short stint with Swansea City, Potter arrived in Sussex in May 2019 and, working with Bloom, has assembled an exciting, versatile squad and installed a philosophy of attractive, possession-based football.

It might not bring Brighton football’s equivalent of a Royal Flush, but with Bloom and Potter calling the shots, the Seagulls have certainly earned their seat at English football’s top table.

West Ham United and Brighton & Hove Albion meet in the Premier League for the ninth time on Wednesday evening.

The Hammers are still seeking their first Premier League win over the Seagulls, having lost the first three meetings and drawn the last five, with all eight matches taking place over the previous four seasons.

The most-recent meeting ended in a 1-1 at the Amex Stadium, where Saïd Benrahma's late long-range strike secured an important point in the Londoners' quest for European qualification.

The home game here last December ended 2-2, when Neal Maupay and Lewis Dunk twice put Graham Potter's side in front, before Ben Johnson - with his first senior goal - and a late Tomáš Souček equaliser secured a share of the spoils.

West Ham's last win over Brighton came in April 2012, when a Ricardo Vaz Te hat-trick saw off the Seagulls 6-0 at the Boleyn Ground. Current first-team coach Kevin Nolan scored the winner in the reverse fixture that season at the Amex Stadium in October 2011.

A member of the Manchester Football Association, 36-year-old Chris Kavanagh will take charge of his 300th match as a professional referee on Wednesday evening.

Kavanagh’s first West Ham United appointment was a FA Cup fourth-round defeat at Wigan Athletic in January 2018. Since then, he has taken charge of 12 Premier League fixtures featuring the Hammers, with the most recent being the 4-1 victory at Aston Villa in October this year.