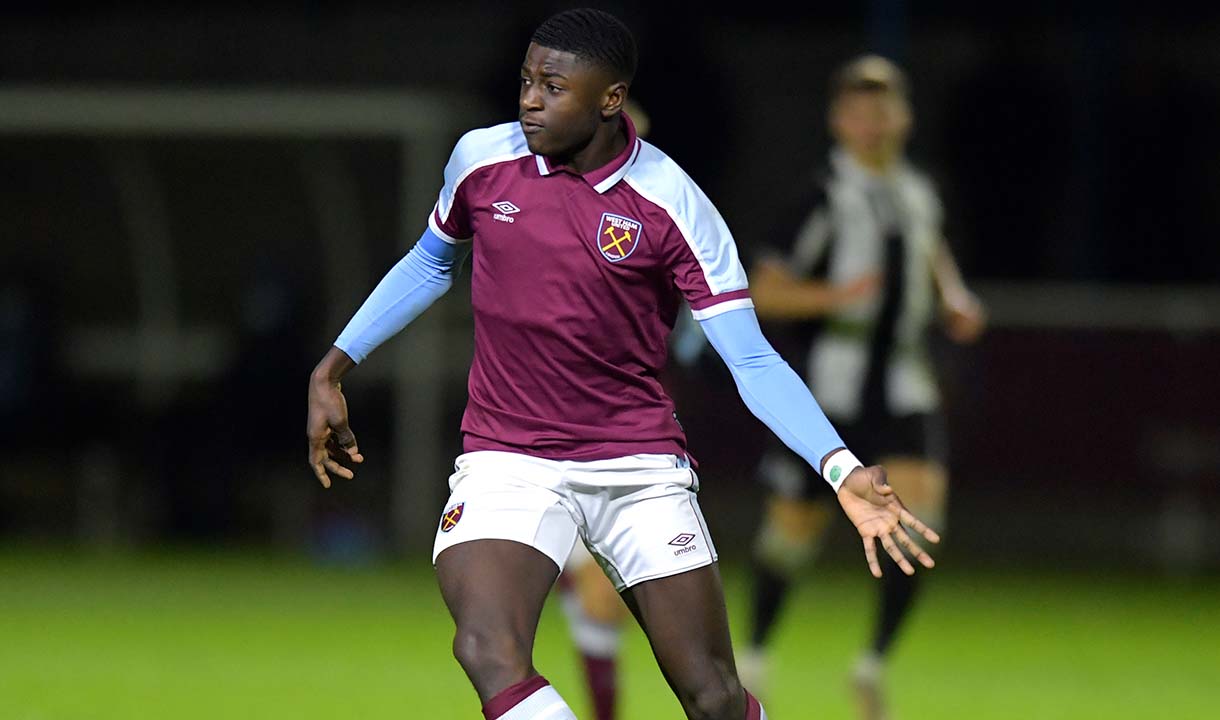 The Hammers' sensational six-goal showing continued a brilliant run of 12 U18 Premier League South games without defeat dating back to September, and ensured Kevin Keen's second-place team kept within a point of leaders Southampton.

Kodua's treble took the headlines, but captain Michael Forbes, Divin Mubama and Callum Marshall also found the net at Little Heath, while Keen's resilient side also made it three clean sheets in succession.

Gideon works hard every day and he’s getting better and better, so I’m extremely happy for him and it’s thoroughly deserved

With Kodua and Oliver Scarles returning to the starting XI after being named as substitutes for the goalless draw at Aston Villa a week previously, West Ham flew out of the blocks and took a deserved lead in the 13th minute. It was midfielder Scarles whose superb corner was met by captain Forbes and his controlled volley found the bottom right corner.

Just minutes later, striker Mubama doubled the Hammers’ lead. The No9 got on the end of lofted ball and executed a perfect finish into the corner of the net, leaving the goalkeeper with no chance as the Irons went 2-0 up.

The two-goal advantage became three just after the 30-minute mark. Scarles whipped in another well-placed corner and, after a scramble in the 18-yard box, the ball fell for Kodua. The forward coolly fired the ball into the net.

Kodua doubled his tally in the 38 minute after a stunning West Ham move. Mubama clipped the ball through to George Earthy who found himself through on goal, but the midfielder unselfishly squared the ball for Kodua, taking the goalkeeper out of the game, leaving the striker to tap the ball into the empty net for his second.

The attacker’s hat-trick was wrapped up just before the break as he again combined with Earthy. Scarles threaded the ball through to Earthy and the No8 fired the ball across to Kodua who diverted the ball into the net on the stretch.

With a 5-0 score-line at the break, Marshall was introduced at half time. Just moments after coming on, he won his battle and latched onto ball over the top. His left footed strike was well saved though and was put behind for corner.

Just moments later, Marshall was on the scoresheet. Regan Clayton did fantastically to get to the by-line and he clipped it to back post. Kodua nodded it back to Marshall, who swivelled and smashed into the bottom corner.

West Ham controlled the remainder of the game with a couple of chances falling for Clayton, but the left back saw two long range efforts saved well.

With just moments to go West Brom threatened from a free-kick, Layton Love got his head on ball, but Jacob Knightbridge was down well and smothered the ball, preserving a third clean sheet in a row for the Hammers.

U18s lead coach Kevin Keen was delighted with the performance.

“We were on them from the first whistle,” he reflected. “I thought that straight from the kick-off we were on the attack, and we were really relentless in the first half with our attacking play and making sure that we were on them defensively. I’m really pleased with the performance.

“I thought that we were especially good in the first half. At youth team level or any level for that matter, it’s pretty impressive to come in 5-0 up at half-time and there were some good goals as well."

Keen was also delighted to see Kodua secure the match ball after a brilliant individual performance.

“I’m so pleased for him," he enthused. "He’s worked so hard all season and he’s been in and out of the team but as a lad, he’s been first class. He works hard every day and he’s getting better and better, so I’m extremely happy for him and it’s thoroughly deserved.”

The Hammers have now recorded three clean sheets in a row and Keen was enthusiastic about his side’s defensive showings throughout the season.

He said: “A couple of years ago it was very difficult to come across a clean sheet. This season we’ve been pretty solid defensively. Throughout the season, whether it’s Jacob or Mason [Terry] in goal, I think the number of clean sheets is a testament to the work that we do every day on the training ground.

“It’s not just the defenders and the goalkeeper, it’s the attackers and the midfielders as well and their hard work for the team is vital in making sure that we are defensively sound.”

West Ham U18s are unbeaten in the league since September. Keen discussed the reasons behind this superb form.

He evaluated: “I think there’s a great togetherness in this squad. We work hard and it’s pretty much the same group every day, occasionally we have a couple of lads go with the U23s, but most of the time it’s the same group.

“We know each other very well, it’s a fantastic group to work with, players and the staff and everybody works hard. I think that togetherness is something we’ll need between now and the end of the season if we want to stay in and around the top of the league. It would be fantastic to be up there come the end of the season.”