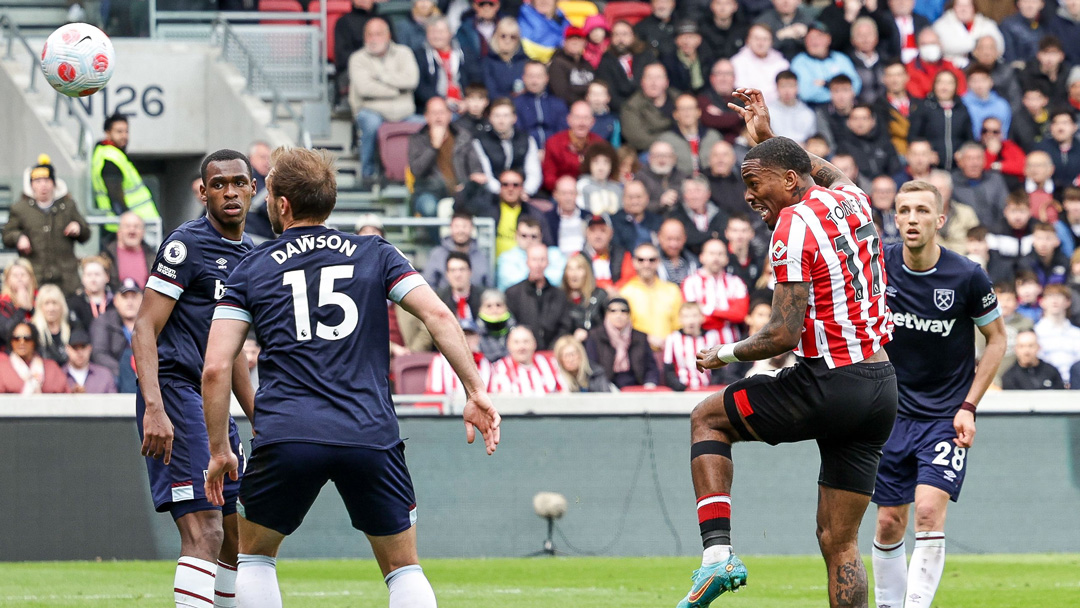 West Ham United stumbled to a 2-0 Premier League defeat at Brentford on Sunday.

The Hammers’ hopes of climbing back into the top five were scuppered by a below-par performance in west London, where second half goals from Bryan Mbeumo and Ivan Toney settled a disappointing derby and earned the Bees a double over David Moyes’ side.

Mbeumo and Toney provided the assists for one another’s goals. First, on 48 minutes, Toney headed Kristoffer Ajer’s right-wing throw into the Frenchman’s path and he fired powerfully past Łukasz Fabiański.

Then, on 64, Michail Antonio lost possession and the Bees countered down their left flank. Rico Henry crossed beyond the far post, from where Mbeumo cushioned the ball square for the unmarked Toney to head in.

Defeat marked a dissatisfying end to a week that had begun brightly with a Premier League home win over Everton and also featured a draining UEFA Europa League quarter-final first-leg tie with Olympique Lyonnais on Thursday evening.

If Thursday’s European match was played in cauldron-like surroundings at London Stadium, this Sunday early afternoon Premier League game at Brentford Community Stadium was anything but, at least until the home side broke the deadlock.

And the first-half action echoed the muted atmosphere for long periods, with the noise levels in west London seldom rising above an expectant murmur.

On the pitch, Brentford carried the more potent threat in the opening 45 minutes, as they did throughout, in all fairness, with the Bees creating nine goal attempts, including five from Mbuemo, to West Ham’s two.

Playing just 64 hours after Thursday’s draining Europa League game ended, when David Moyes’ side played the entire second half with ten men, it was understandable that the Hammers’ performance lacked the same energy and urgency. And the Irons’ cause was further hindered when Kurt Zouma was forced off with a lower leg injury just before the half-hour mark.

Fresh from their 4-1 win at Chelsea the previous weekend, Thomas Frank’s newly-promoted side sensed an opportunity to repeat their win at London Stadium back in September and created a succession of chances as Fabiański saved a header and rasping left-footed from Mbeumo and two daisy-cutters from the boot of Denmark international Christian Eriksen.

West Ham’s own attacking play was considered and deliberate, with the intention of dragging Brentford out of their rigid 4-3-3 formation.

When it did work, the Irons’ created their two chances, but neither amounted to much as Tomáš Souček headed the returning Vladimír Coufal’s right-wing cross straight at David Raya on 25 minutes, then Cresswell sliced Jarrod Bowen’s deep corner well wide in added time.

While Mbeumo may have been frustrated before half-time, it took less than three minutes for the No19 to find the net after the break, latching onto Toney’s header from a throw-in, bursting away from Cresswell and firing past Fabiański at the goalkeeper’s near post.

Moyes sent on former Brentford player Saïd Benrahma and Nikola Vlašić from the substitutes’ bench, but it was Frank’s fresher side who continued to look the more likely scorers, with Mbeumo scooping another decent chance over the crossbar and Sergi Canós seeing a shot held by Fabiański .

Despite the continued support from the Claret and Blue Army on their first competitive visit to Brentford’s compact new ground, which opened in 2020, the Hammers failed to muster a response until added time, when Declan Rice drove a long-range effort too high and Benrahma's deflected effort landed on the roof of the net.

Having passed up the chance to climb the Premier League table, Moyes and his squad will now need to regroup and recharge for Thursday’s trip to France.