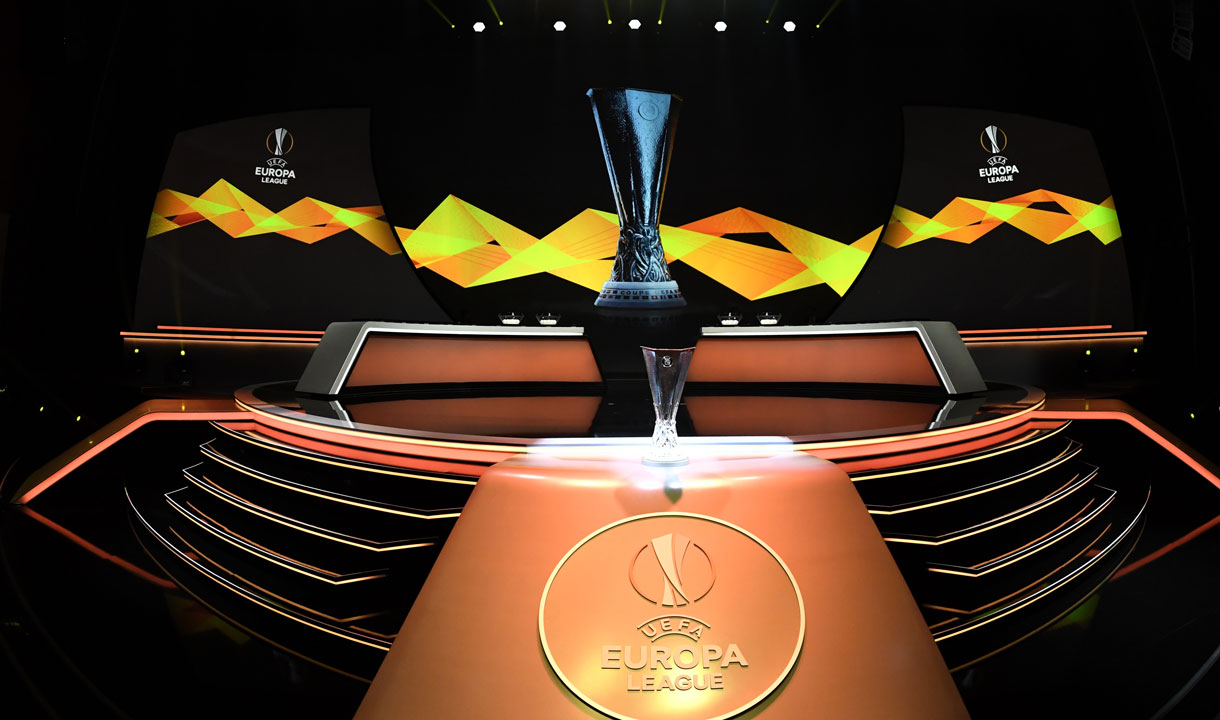 The UEFA Europa League knockout round play-off draw has been made in Switzerland, giving West Ham United a slightly better idea of who they could face in the round of 16.

The eight knockout round play-off winners will face the eight UEFA Europa League group winners, - West Ham, Lyon, Monaco, Spartak Moscow, Eintracht Frankfurt, Galatasaray, FK Crvena zvezda and Bayer Leverkusen - in the round of 16, which will again be played over two legs on Thursday 10 and Thursday 17 March 2022.

The draw for the round of 16 will be made on Friday 25 February and will be an open draw. That means, with no other English clubs still involved in the Europa League, we could face any of the eight knockout round play-off winners.

This is what happened at UEFA headquarters in Nyon on Friday...

Who is facing who in the knockout round play-off?

The eight clubs who dropped down from the UEFA Champions League will host the first leg on Thursday 25 February, with the second leg being hosted by the eight UEFA Europa League group-stage runners up a week later.

The knockout play-off round draw went as follows:

Who could West Ham United face in the round of 16?

The Germans finished third in Champions League Group A, behind Manchester City and Paris Saint-Germain, beating the Premier League champions on matchday six.

The Portuguese Primeira Liga runners-up are coached by Sérgio Conceição and finished third in Champions League Group B behind Liverpool and Atlético Madrid.

The 2003 and 2011 winners have a squad that includes former West Ham youngster Toni Martinez and are captained by veteran Portugal defender Pepe.

We have never faced Porto previously.

Borussia Dortmund finished third in Champions League Group C behind Ajax and Sporting Lisbon, being edged out by the latter on head-to-head after both clubs won three and lost three.

We faced Dortmund in a post-season tour match at the old Stadion Rote Erde in May 1959, losing 3-1, before going down 5-2 on aggregate in the European Cup Winners’ Cup semi-finals in April 1966. West Ham returned to the Stadion Rote Erde in pre-season in July 1967, losing 4-1.

Formed in 1997 and based in the capital of Moldova, Tiraspol, Sheriff won their 19th National Division title last season before finishing third in Champions League Group D behind Real Madrid and Inter Milan – beating the former in Spain on matchday two.

Coached by Ukrainian Yuriy Vernydub, Sheriff draw players from across the world for their squad, including the Malian namesake of Wolves winger Adama Traoré.

We have never faced Sheriff previously.

Now coached by legendary midfielder Xavi, Barcelona’s squad may no longer include Lionel Messi, but it is captained by Spain midfielder Sergio Busquets and contains his fellow internationals Gerard Piqué and Pedri and Netherlands frontman Memphis Depay.

We have never faced Barcelona previously.

Coached by Gian Piero Gasperini, the Bergamo-based club has become one of the most entertaining in Europe in recent seasons, led by Colombian forwards Duván Zapata and Luis Muriel. They are captained by UEFA Euro 2020 winner Rafael Tolói.

The Italians visited London Stadium as recently as August 2021, when they were beaten 2-0 by the Hammers in the Betway Cup.

Bidding to win the competition for a record seventh time – in their own stadium, to boot – Sevilla finished third in Champions League Group G behind Lille and RB Salzburg.

We have never faced Sevilla previously.

The 2008 UEFA Cup winners have no fewer than four Brazilians alongside their home-grown stars, including group-stage standout performers Malcom, Claudinho and Wendel and veteran striker Artem Dzyuba.

We have never faced Zenit previously.

Scottish champions Rangers finished second in Europa League Group A, eight points behind winners Lyon and a point ahead of Sparta Prague.

In our only previous meeting, West Ham visited Ibrox in August 1979, losing 3-2 to Rangers in the semi-finals of the Tennent Caledonian Cup pre-season tournament.

The Europa League Group B runners-up finished three points behind Monaco and a point clear of PSV to secure their passage to the knockout round play-off.

We have never faced Sociedad previously.

The Italians were edged into second place in Europa League Group C by Spartak Moscow on head-to-head record, but did knock Leicester City out of the competition. They won the UEFA Cup in 1989.

The only previous meeting between the two was a Bobby Moore Cup tie at the Boleyn Ground in August 2009, which the Serie A club won 1-0.

Coached by Pedro Martins, Olympiacos have a large and cosmopolitan squad that includes veteran Morocco striker Youssef El-Arabi, who scored three goals in the group-stage.

West Ham faced Olympiacos in the European Cup Winners’ Cup first round in 1965/66, winning 4-0 at the Boleyn Ground and drawing 2-2 in Athens. The Greeks later visited the Boleyn Ground for a pre-season match in August 2006 which ended 1-1.

Coached by former Chelsea boss Maurizio Sarri, Lazio finished second in Europa League Group E, despite winning just two of their six group-stage ties, behind Galatasaray and ahead of Marseille and Lokomotiv Moscow.

The Rome-based team have former West Ham winger Felipe Anderson in their squad, along with a host of other recognisable players, including captain and Italy international forward Ciro Immobile, Serbia midfielder Sergej Milinković-Savić and Albania No1 Thomas Strakosha, who recently faced England in FIFA World Cup qualifying.

Historically, of course, Hammers hero Paolo Di Canio played for Lazio at the start and end of his career. We have faced Lazio once previously, losing 2-0 in Lebring, Austria, in a pre-season match in August 2007.

Coached by former Sheffield Wednesday and Swansea City manager Carlos Carvalhal, Braga have a squad comprising mostly Portuguese and Brazilian players, including Lucas Piazon, who featured for Chelsea against West Ham in the FA Youth Cup back in 2012!

We have faced Braga twice previously. The first was a 1-1 pre-season draw at the Estadio Municipal in August 2012, with Winston Reid on target for the Hammers, and the second a 1-0 Torneio Do Guadiana defeat a year later in Portimão.

The Chilean arrived in east London in May 2018 after winning the Premier League title with Manchester United four years previously. He took charge of 64 West Ham matches, guiding the Club to tenth in his first season, but a poor run of form saw him depart in late December 2019.

Based in the southern city of Seville, Betis are captained by veteran winger Joaquín and have a talented squad which includes France forward Nabil Fekir and Portugal midfielder William Carvalho.

We have faced Betis just once previously, in the pre-season Real Mallorca Tournament in August 1977, drawing 0-0 before losing 5-6 on penalties.

West Ham will need no introduction to the Europa League Group H runners-up, who they have already faced twice in the group-stage.

The Hammers defeated the Croatian double winners 2-0 in Zagreb on matchday one, before a youthful side were beaten 1-0 at London Stadium on matchday six, by which time David Moyes’ men had secured top spot and progress to the round of 16.