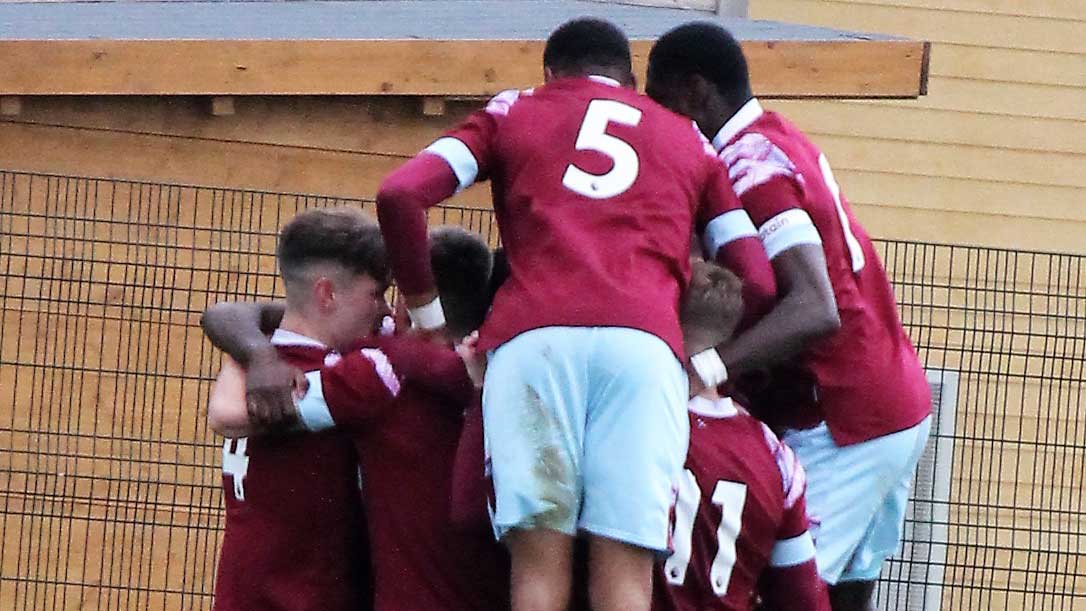 West Ham United U18s came from two goals down to stun Tottenham Hotspur 4-3 in U18 Premier League South at Little Heath on Saturday.

The visitors raced into an early two goal lead before Lewis Orford halved the deficit from close range. Tottenham’s two-goal lead was restored after half-time as Will Lankshear secured an impressive hat trick by the 51st minute.

Kevin Keen’s West Ham team are now fifteen points clear at the top of the U18s Premier League South, having won their opening ten matches of the season.

U18s coach Mark Phillips was full of praise for his side after an incredible turnaround.

“Ollie Scarles scored a fantastic goal to get us right back into the match. It was like an arrow, it went straight into the corner. Divin then scored twice and that completed a brilliant turnaround. It was a great reaction.”

The Hammers had to withstand early pressure and Tottenham almost took the lead inside five minutes. Mikey Moore’s volley was superbly saved by Mason Terry, and the ball rebounded to Tyrese Hall, who hit the outside of the post on the follow up.

The north London outfit continued to push for the opener and their pressure was rewarded 12 minutes in. Lankshear found space in the 18-yard-box and the Spurs No9 headed Jaden Williams’ cross into the bottom left corner, leaving Terry with no chance.

Lankshear secured his brace three minutes later. The Tottenham striker sped down the left flank before striking a low effort across the goal and into the bottom right corner, beyond the reach of Terry.

West Ham found an immediate response. George Earthy showed fantastic balance and skill to beat several Tottenham defenders to get to the byline. The attacking midfielder found Orford in space and the No4 made no mistake from close range.

The Irons pushed for an equaliser after half-time but it was Spurs and Lankshear who would score the fourth goal of the match. The Tottenham striker found space in the box before drilling a powerful effort into the bottom corner to secure his hat-trick.

Keen’s side once again showed a superb mentality to bounce back. The ball broke to Patrick Kelly on the edge of the box and the Northern Irish midfielder squared the ball to Callum Marshall. The striker quickly flicked the ball to the onrushing Scarles who smashed the ball into the back of the net from 12 yards out.

For the first time in the match, the hosts had the momentum. Scarles’ long ball was held up in the wind and Marshall did superbly to bring it down on the edge of the box. The ball fell to Earthy, who immediately located Mubama in space. His low strike beat Luca Gunter in the Tottenham goal, levelling the scoreline with 15 minutes to play.

Mubama scored his second and West Ham’s fourth goal of the match just three minutes later. Orford’s inswinging corner was flighted to perfection and Mubama powerfully headed the ball into the back of the net, to secure the Hammers’ tenth straight league victory. 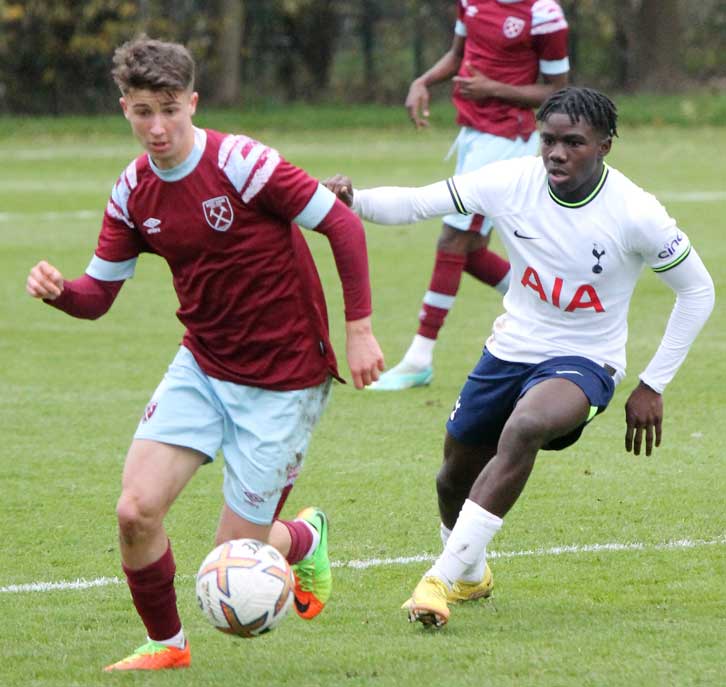 Phillips suggested that the last week has been a key period of the season for the young Hammers, with the side picking up maximum points from London derbies against Arsenal, Chelsea and Tottenham.

“It’s been a fantastic week,” Phillips reflected. “We have faced three top teams in the last week and we have picked up nine points. It is a fantastic achievement for the whole team.

“There is a lot of togetherness in this side and we have proved that again in the last week. It hasn’t been an easy week, we were two goals behind against Chelsea, and we were two goals down on two occasions against Tottenham. Most people would be pleased to come back to draw these matches, but not these boys. To win both matches is a huge bonus for us.”

After a disappointing first half the young Hammers reverted to a back four at half time and Phillips suggested that this helped the side to grow into the match.

He continued: “We started the match with a front three and it didn’t quite work in the way that we wanted. You have to give Tottenham credit, they are second in the league and they are a top team. They played some great football in the first half and we had to try and tip the balance of the game.

“We changed the shape at half-time and the players deserve a lot of praise for the way that they adapted. That allows us to change the shape during matches if we need to. The players are comfortable in different systems, whether that’s a back four or a back five.”

Earthy played a key role in the West Ham comeback and Phillips praised the attacking midfielder for his impressive performance.

“He was the best player on the pitch,” Phillips evaluated. “He was brilliant even when Tottenham were dominating the ball. He made the first goal with a fantastic assist where he got in between the lines before playing a fantastic pass to Lewis Orford.

“There were several other positive performances but George was the outstanding player on the pitch for me. Tottenham have some incredibly talented players too, so it was a fantastic achievement for George to be the most influential player on the pitch.”

Whilst Phillips is delighted with the Hammers’ superb start to the season, he is keen to focus on the remaining two matches before Christmas.

“Kevin Keen set them a goal to go unbeaten up until Christmas,” Phillips said. “He set them that target last month and the lads have done an excellent job so far. I thought that was a tall order, especially when you look at some of the teams that we have had to face, but so far the lads have been brilliant.

“There was obviously a sense of joy and delight in the dressing room after the match, especially after such a good comeback, but the focus now must turn to our upcoming matches. I would also like to credit our sport scientists and our strength and conditioning coaches. We always look fitter than our opponent and that’s a credit to our staff.”