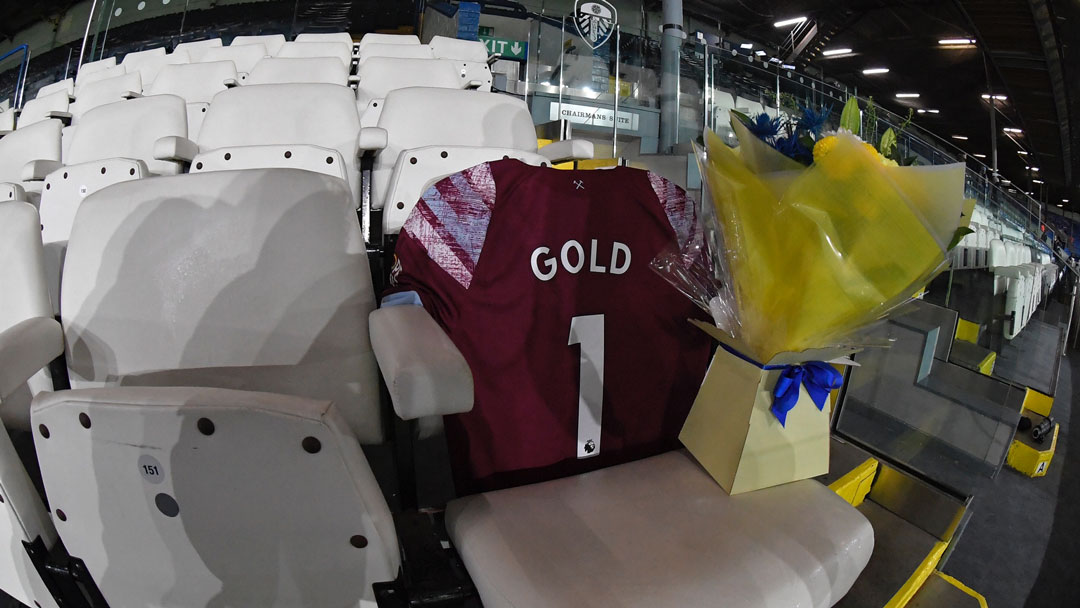 Tributes paid to David Gold from across the football world

The lifelong Hammer who fulfilled his dream of owning the Club he loved, David Gold passed away surrounded by his fiancée and daughters on Wednesday morning, was a liked, respected and influential member of the football family.

That much was evident in the outpouring of condolence from across the world on Wednesday, led by his long-time business partner, friend and fellow West Ham fan David Sullivan, and Hammers manager David Moyes, which you can read here.

At Wednesday's 2-2 Premier League draw with Leeds United at Elland Road, flowers and a West Ham shirt were placed in David Gold's seat in the Directors Box, while supporters applauded in his memory before kick-off.

The most personal of tributes came, naturally, from David Gold’s daughters, Jacqueline and Vanessa, who he loved dearly and worked closely with to build the family’s successful businesses.

Alongside four poignant photographs of her, David and Vanessa, Jacqueline tweeted: “Today we lost our hero. We are beyond heartbroken.”

Today we lost our hero. We are beyond heartbroken #RIPDad pic.twitter.com/zOb3OkyAKr

Vice-Chairman, Baroness Brady, knew and worked with David Gold for three decades. Baroness Brady was appointed managing director of Birmingham City, then owned by David Gold, his brother Ralph and David Sullivan, in 1993, and helped the Blues reach the EFL Cup final and Premier League. In 2010, she joined David Gold and David Sullivan at West Ham United as Vice-Chairman, following their takeover of the Club.

She tweeted: “To a great man, a great friend for over 30 years and a complete gentleman – you will be missed. Rest in peace x”

David Gold, his brother Ralph, David Sullivan and Baroness Brady led Birmingham City to the Premier League and the EFL Cup final after taking ownership of the Blues in 1993, spending 16 years at St Andrews.

The EFL Championship club tweeted: “The Club is devastated to learn of the passing of former Chairman David Gold at the age of 86. Our thoughts are with his daughters Jacqueline and Vanessa, and his fiancée Lesley at this incredibly difficult time.”

The Club is devastated to learn of the passing of former Chairman David Gold at the age of 86.

Our thoughts are with his daughters Jacqueline and Vanessa, and his fiancée Lesley at this incredibly difficult time. 💙 pic.twitter.com/cCXmZDYIyT

Rivalries were also cast aside on a day of great sadness, with Millwall, Tottenham Hotspur and Arsenal among the many clubs to tweet their respect and condolences.

Premier League Chief Executive Richard Masters also paid tribute to David Gold, who spent more than two decades helping forge the future of the competition and football in this country.

“David has been around the Premier League Shareholders’ table for more than 20 years, with both West Ham United and Birmingham City, and leaves a great legacy and a host of good friends," said Masters, in a statement.

“David’s contribution to the game goes beyond the progress he oversaw at West Ham, and includes a big impact throughout football and the Premier League itself. My thoughts are with his family and friends, and with all at West Ham. He will be truly missed."

David Gold was a regular visitor to the Club during his 13 years as Joint-Chairman, often flying his own helicopter to Chadwell Heath and then later visiting Rush Green by car to watch training and meet the manager, coaching staff and players to talk football and, most importantly, West Ham.

Among the many players who enjoyed his company was Carlton Cole, whose Play-Off final goal at Wembley helped the Hammers win promotion back to the Premier League in May 2012.

“Sending my condolences to the Gold family and close friends,” the former centre-forward and current Academy coach tweeted. “Mr. Gold was a favourite of mine at the club. Always had time for me and wanted me to win in life. A very kind & warm-hearted man. Thank you for the conversations and memories. RIP.”

We’re so very sad to hear about the passing of David Gold who graciously supported the Tombides family & DT38 throughout our most difficult time.

Our thoughts are with David’s family at this very difficult time. Rest in peace. 🙏 pic.twitter.com/EnZE8FJ1kT

As a former West Ham junior player himself, David Gold also had a strong interest in the Academy of Football, and he was on hand in October last year when the Mark Noble Arena and Claret and Blue Line were opened at Chadwell Heath, providing facilities for the next generation of young talent to pursue their own dreams and ambitions.

One Academy player he came to know well was Dylan Tombides, the Australian forward who sadly passed away in 2014, aged just 20, after being diagnosed with cancer.

David Gold supported the Tombides family through their own period of grief, escorting Dylan’s mother Tracy when tributes were paid at the Boleyn Ground and backing the DT38 Foundation in his memory.

“We’re so very sad to hear about the passing of David Gold who graciously supported the Tombides family & DT38 throughout our most difficult time,” the charity tweeted. “Our thoughts are with David’s family at this very difficult time. Rest in peace.”

With supporters, journalists and broadcasters also taking to social media to pay their tributes, what everyone at West Ham United already knew was confirmed – David Gold was a loving family man who wanted the best for the Club he supported for more than 80 years.