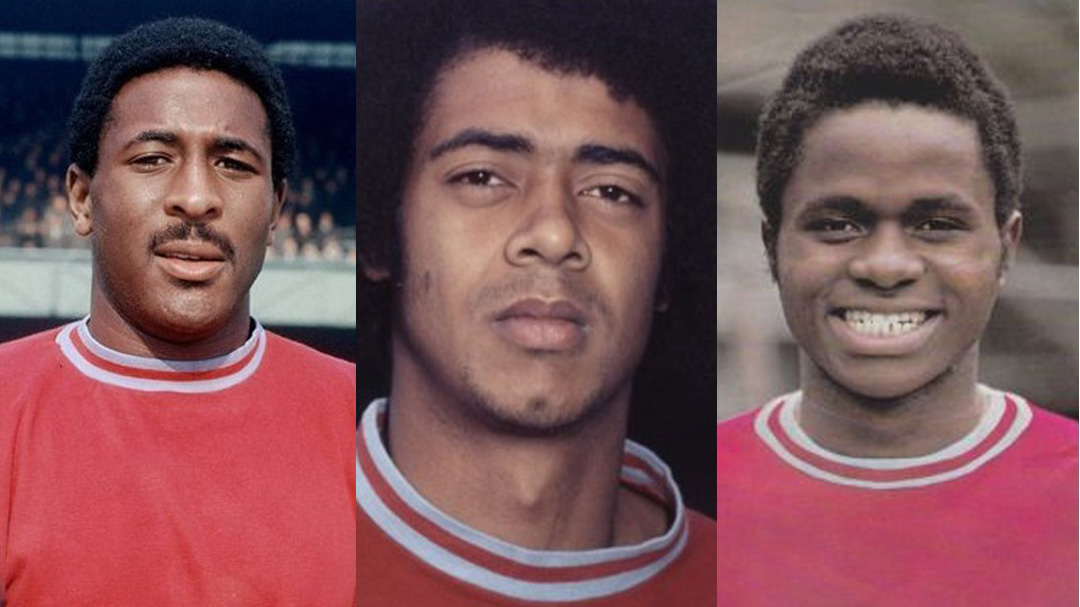 Many football fans will have heard of West Bromwich Albion’s ‘Three Degrees’ – the three black players Laurie Cunningham, Cyrille Regis and Brendon Batson who first appeared for Albion in a First Division game at Ipswich Town on 4 March 1978.

But this was not the first time that three black players had appeared in the same Football League team. That particular piece of football history proudly belongs to West Ham United. The three players were Clyde Best, Ade Coker and Clive Charles and the game was played at Upton Park on 1 April 1972, almost six years before West Brom’s celebrated trio stepped onto the Portman Road turf.

Today marks the 50th anniversary of that momentous occasion.

A crowd of 30,763 saw history being made and most went home happy as the Hammers defeated Spurs by two goals to nil with Coker netting in the 89th minute to secure the points for the home side, Trevor Brooking having scored the opener in the first half.

The hand-written amendments to the match programme show that Charles and Coker were late replacements for Frank Lampard and Geoff Hurst respectively. Both had suffered injuries in a 2-2 draw at home to Leeds United the previous day, which was a Good Friday. West Ham played at Stoke City on Easter Tuesday when Lampard and Hurst were restored to the side. Yes, that’s three games in five days! 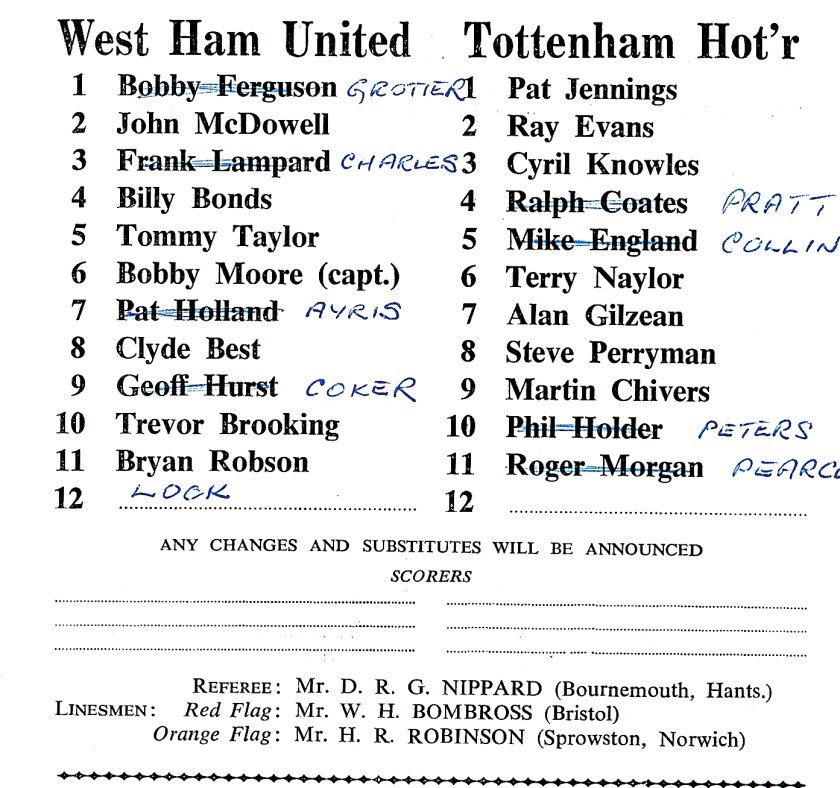 Best played in all three of those Easter fixtures, and was an ever-present that season, a rare feat these days but one matched by Billy Bonds, Pop Robson and Tommy Taylor in 1971/72. He scored 17 League goals, making it his best ever season. He also appeared in every West Ham League game the following season.

So much for critics who in the 1970s wrote of ‘the temperamental and physical obstacles’ facing black players and one unnamed League manager who claimed that: “The cold and the mud can destroy them [black players]. They are at their best when the pitches are grassy and the sun is on their backs.”

He was an inspiration to Viv Anderson, who went on to become the first black player to win a full England cap and said: “There was only ever one black face on the television playing football – a lad called Clyde Best at West Ham in the 1960s. Every time Match of the Day came on, Clyde Best would be there. I thought ‘yes, I could be like him’.”

Best paved the way for many young black players like Anderson and is a true Pioneer as well as a West Ham legend.

There was only ever one black face on the television playing football – a lad called Clyde Best at West Ham in the 1960s. Every time Match of the Day came on, Clyde Best would be there. I thought ‘yes, I could be like him
Viv Anderson

Whereas Best was well established in the West Ham side, Coker and Charles were relative novices.

Nigerian-born Coker had made a sensational start to his football career earlier that season, scoring after only seven minutes of his debut in a 3-0 win at Crystal Palace in October 1971. He was still only 17 when he became part of the history-making trio against Spurs.

Coker made ten appearances over three seasons for the Hammers before eventually moving to the United States where he flourished and played five times for the USA national team.

Charles played 15 games for the Hammers before joining Cardiff City but, again like Coker, it was in the United States that he made his biggest impact. He became one of the most admired and respected coaches of both men’s and women’s football and was assistant coach to the men’s national side at the 1998 FIFA World Cup finals.

By April 1972, West Ham had played four black players in League football. That might seem unremarkable now but at that stage teams like Nottingham Forest, Wolves, Liverpool, Chelsea, Newcastle and, incidentally, West Bromwich had never fielded a single black player in their history. West Ham and its Pioneers led the way in helping break down barriers.

In his column in the Daily Mirror following the Spurs game, Bobby Moore recognised what Best, Coker and Charles had achieved and in explaining the diversity of the West Ham squad, writing: “In the part of Britain where we live it’s not unusual. The East End of London has been one of the most exciting places in the world for centuries. It’s cosmopolitan and has a welcome hand for most people.” 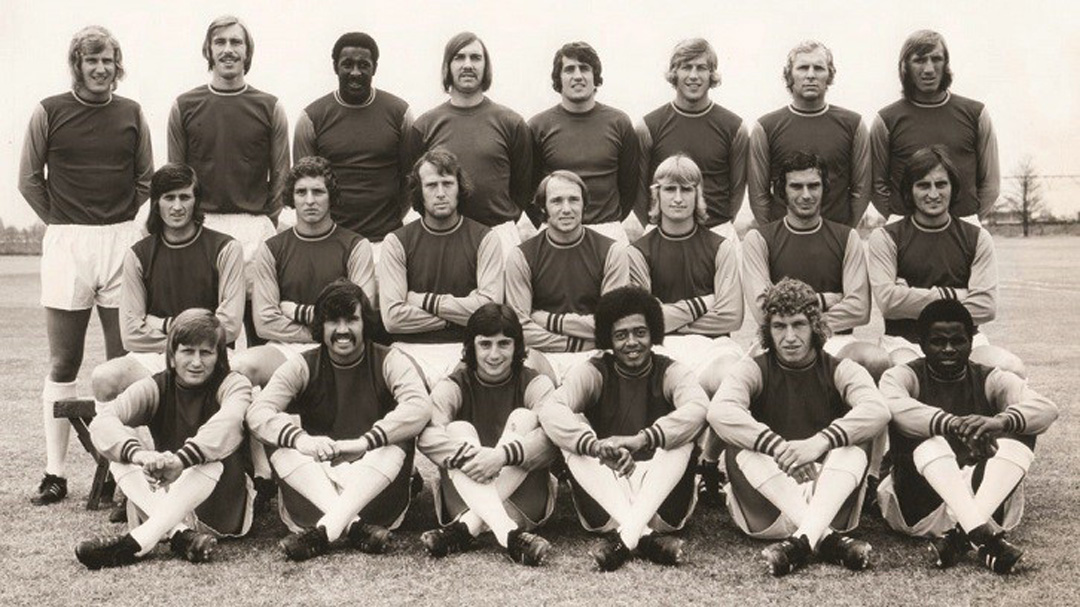 Inclusive Irons, Love Football Hate Racism, WHUST and the authors of Football’s Black Pioneers will be celebrating the events of Easter Saturday 1972 on Easter Tuesday 19 April 2022 at Grow, Hackney from 7pm until 11.30pm. The evening will be a mixture of DJ music, live music from The Shimmer Tones and interviews with former players hopefully including Best and Coker via video!

At £10 tickets are priced affordably to encourage attendance with any profit going to a local charity. Details are shown here and, as Bobby Moore would have said, everyone is welcome!