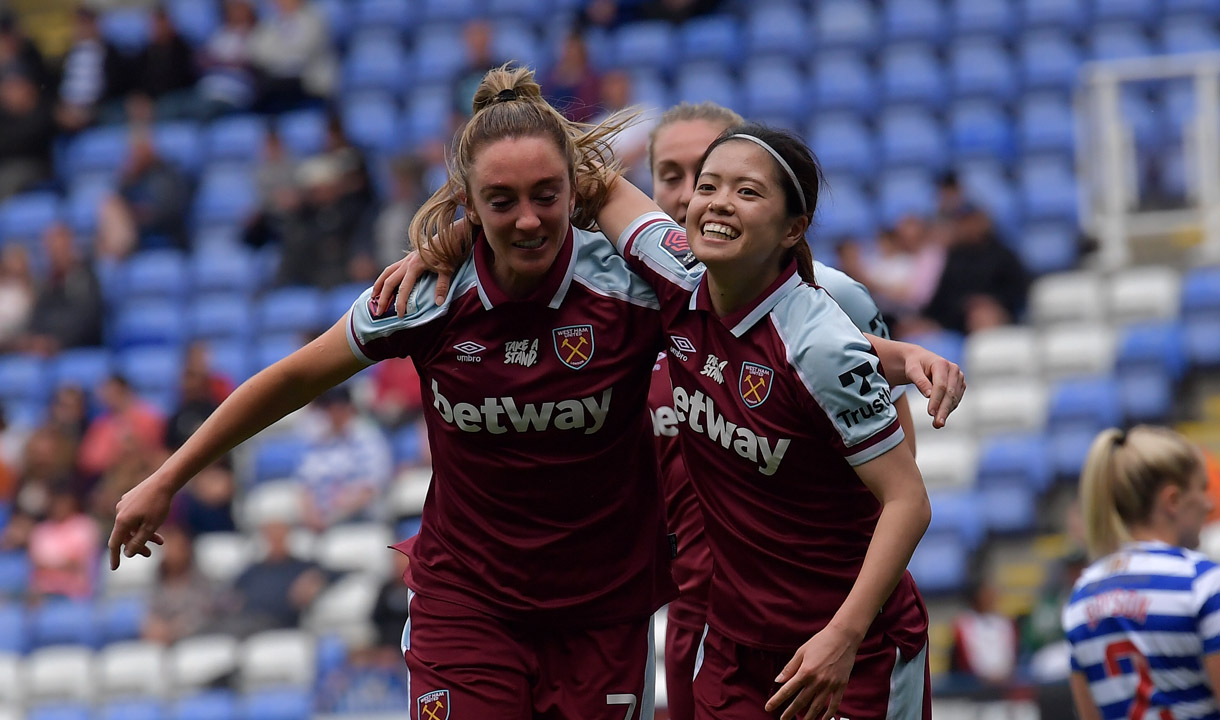 West Ham United Women got back to winning ways with a 2-1 Barclays FA Women's Super League victory over Reading.

After a dominant first half, Emma Snerle bagged her first goal for the Club with a terrific finish just after the break. Yui Hasegawa added a second as the clock counted down to full-time, firing beyond Grace Moloney.

Faye Bryson did grab a consolation late on, but the Hammers held out to pick up their seventh win of the campaign in the Barclays FA WSL.

Olli Harder was without Club Captain Gilly Flaherty and fellow defender Lucy Parker for the clash in Berkshire, while midfielder Kate Longhurst captained the side on her 100th appearance for the Club.

The Irons had the ball in the back of the net after only eight minutes, only for it to be ruled out. Lisa Evans did well out wide to fire a ball into Snerle – her effort was well saved by Grace Moloney. Dagný Brynjarsdóttir was adjudged to have been offside as she headed in the rebound.

The away side were the dominant force in the opening 15 minutes, moving the ball around swiftly as they looked to open the scoring. Kateřina Svitková forced Moloney into another smart save with a header at the back post.

The hosts were struggling to cope with their opponents at times, but the Hammers couldn’t land that decisive effort, as Moloney again made a good stop to keep them out on 20 minutes.

Most of West Ham’s joy came from the wide areas, and Svitková delivered a delightful cross onto the head of Evans, but the Scotland forward’s effort could only bounce off the crossbar and behind.

Adriana Leon had the golden opportunity of the first half, being played in behind by Evans, she could only fire at Moloney from close range.

At the other end, Lilly Woodham forced Mackenzie Arnold into her first save of the afternoon 10 minutes from the break.

Harder would have been left wondering how his team were not ahead as the whistle sounded for the break.

The Hammers finally got in front at the very beginning of the second half. Snerle bagged her first goal in Claret & Blue, finding the top corner with a fierce finish from inside the area.

That seemed to lighten up the home side, who now had to commit players forward. Deanne Rose was liveliest for them, her cross found Harding with space inside the area, but Longhurst did well to eat up the ground and get the ball away from danger.

The game lost a little bit of its early tempo, but the Hammers remained in control for the most part.

With the game heading towards its conclusion, the home side upped the pressure. Rose went close again, forcing Arnold into a good save in the final five minutes.

The Hammers weren’t done there though, as Hasegawa converted from close range after showing some lovely composure before firing beyond Moloney.

Bryson did fire in a consolation, but the Hammers hung on to clinch their second win over the Royals in as many months.