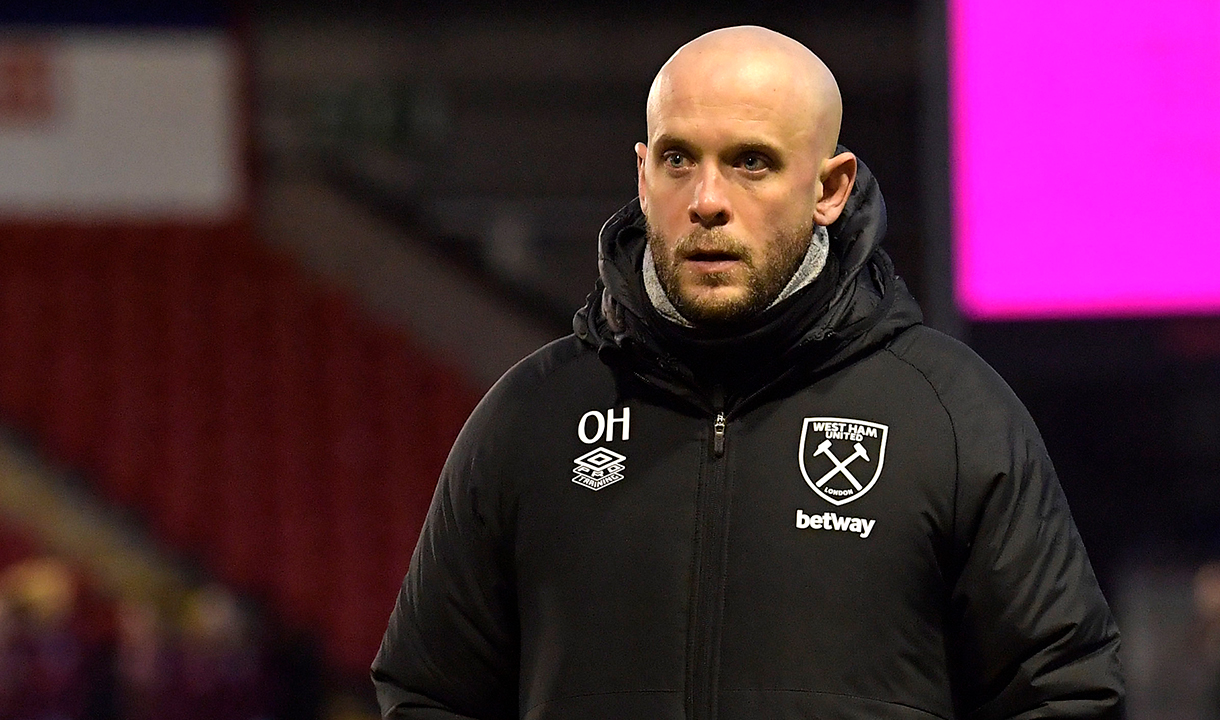 West Ham United Women’s manager Olli Harder was pleased to see his side emerge with three points from a hard-fought contest against Aston Villa at Banks’s Stadium.

Played in cold, blustery conditions, the Hammers recorded their first-ever Barclays FA Women’s Super League win over the Villans thanks to goals at the beginning of both halves from Abbey-Leigh Stringer – the midfielder’s first in Claret and Blue – and Kateřina Svitková.

Harder’s team were forced to dig in for long stretches of both halves in a bid to hold onto those leads, being pegged back in the first period by Alisha Lehmann’s penalty, but staying in front at the culmination of the second thanks to several strong Mackenzie Arnold saves.

Having demonstrated grit and determination to win an evenly-matched contest, Harder praised his players for the manner of their performance in challenging conditions.

“It was a tough one,” the manager admitted at full-time. “The pitch, the weather, the opponent…

“It was a really gritty performance, and one of those nights where you just want to take the three points and get home.

“It’s a little bit bittersweet. We thought we played terrifically [against Aston Villa] last time at Villa Park [in May 2020, a 0-0 draw], and we came away with only one point then, and again in the previous match [a 1-1 draw in Dagenham in September].

“I didn’t realise that that was our first win against Villa, but that’s another notch on our belt, so well done.”

The Hammers took an early lead in the Midlands when Svitková’s corner was spilled by Villa ‘keeper Hannah Hampton. A goalmouth scramble was concluded by Stringer, who stretched out a leg to prod the ball over the line.

The midfielder’s first goal of the season – and first in the WSL in almost three years – made her the Irons’ eleventh different player to strike in the competition, the joint-highest number in the league.

“Not bad!” Harder smiled. “I’m sure she’s happy with it – I think there was one of Abbey-Leigh Stringer’s big toes in there!

“A goal’s a goal and she’s thrilled to bits to be on the scoresheet. It’s the eleventh different player this season to score for us, so that’s really showing some progress from where we were.”

The manager did admit, however, that a lack of control in possession allowed Villa to dominate the first half, and was pleased to see his side up their pressing intensity in the second, leading to Svitková’s settler.

Harder commented: “We were disappointed with the application in regards to possession, especially in the middle of the pitch. It really killed us, so we had discussions about taking a bit more ownership with regards to looking after the ball and helping us to get the team up the pitch.

“That helped us a lot in a lot of phases, in particular in transition. We were in better positions to stop transition, and of course we were more dangerous, so it allowed us to get up and press a lot better.

“Obviously the goal came from that pressure, so I’m pleased that we could apply ourselves.

“It’s part of what we do and part of our ethos. When we can win balls in transition… we did score, but we probably could have scored two or three more.

Sunday’s win takes the Hammers to within five points of Manchester United, who sit third in the WSL table.

The only dampener on the evening was an injury to winger Lisa Evans in the first half, which saw the loanee substituted at the interval.

Harder revealed: “I think there is a calf issue there. I need to assess it further and speak with the medical staff as she seemed to be cramping up.

“Hopefully that doesn’t rule her out of next weekend, but we’ll need to see and assess, and see how things go.”