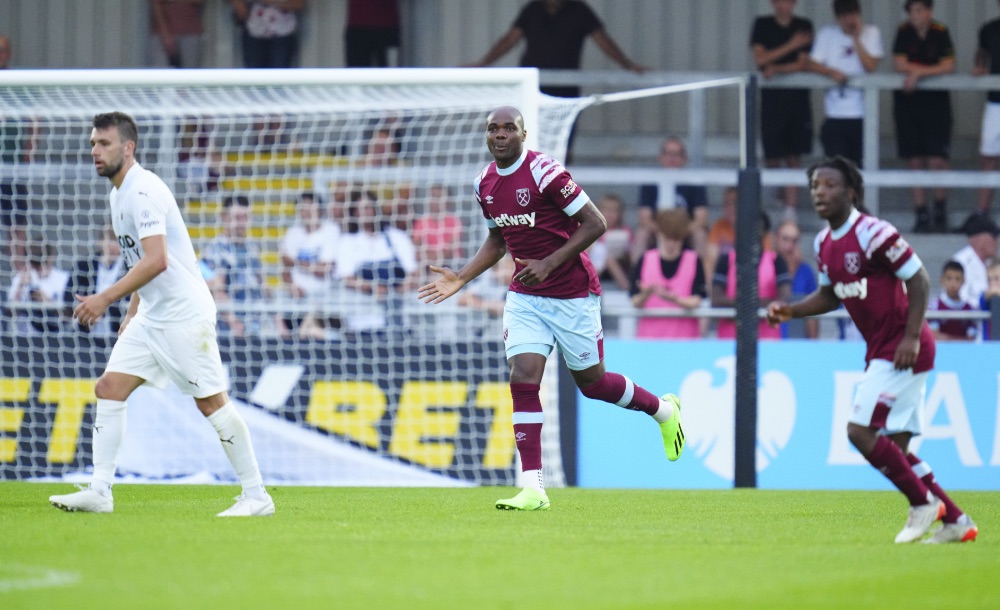 Angelo Ogbonna made his first appearance since suffering a serious knee injury eight months ago as West Ham United continued our pre-season programme with a 1-1 draw at Boreham Wood on Tuesday night.

The Italy defender has been working hard behind the scenes on his comeback, and was rewarded with a run-out from the bench as his team were given a good workout in Hertfordshire.

Saïd Benrahma fired the visitors in front with a well-placed free-kick midway through the first half, but Will Evans drew his side level shortly after the break.

We knocked on the door after the break, but were unable to find the way through for a second time and the spoils were shared.

As is customary for the Hammers at this time of year, we split our squad for the first friendly on home soil, with a blend of youth and experience on show both at Boreham Wood and up the A12 at Ipswich.

Manuel Lanzini captained the team on show at Meadow Park, but it was the National League hosts who made the brighter start, and Darren Randolph had to be alert on 19 minutes, gathering well after Dennon Lewis cut inside from the left channel and looked for the far corner from a tight angle.

Two minutes later the Hammers registered their first shot of the evening, and it resulted in the opening goal.

Benrahma was the goalscorer, placing a free-kick from just right of centre perfectly, giving home keeper Nathan Ashmore no chance with his effort from 25 yards.

The No22 almost had a second six minutes later when Ashmore, in trying to play out from the back, succeeded only in passing straight to Benrahma. The goalkeeper’s blushes were spared by a last gasp block, which deflected the Algerian’s effort just wide.

West Ham were beginning to purr by now and Keenan Forson went close with a header from Arthur Masuaku’s inviting cross shortly afterwards, sending his header just over the top.

At the other end, Mark Ricketts’ looping header from a Jacob Mendy Mendy corner clipped the top of the Hammers’ crossbar, while a second corner, three minutes before the break, brought a leveller

Evans was the man on the spot to knock home after Darren Randolph’s punch landed nicely for the Boreham Wood man in the last meaningful action of the opening period.

The Hammers started the second period on the front foot, with the lively Thierry Nevers twice going close.

First his snap-shot on the turn needed a decent stop from Ashmore, then he played an incisive one-two with Manuel Lanzini, darting onto the dinked return pass but shooting straight at the home stopper.

The biggest reception of the night, however, was reserved for Ogbonna, who came off the bench with 23 minutes remaining to make his first appearance since suffering a serious knee injury in the victory over Liverpool 247 days ago.

Another of the Hammers subs, Nathan Trott, was called into action ten minutes from time, as he turned Mendy Mendy’s fiercly-struck free-kick aside, and 1-1 was how it ended.