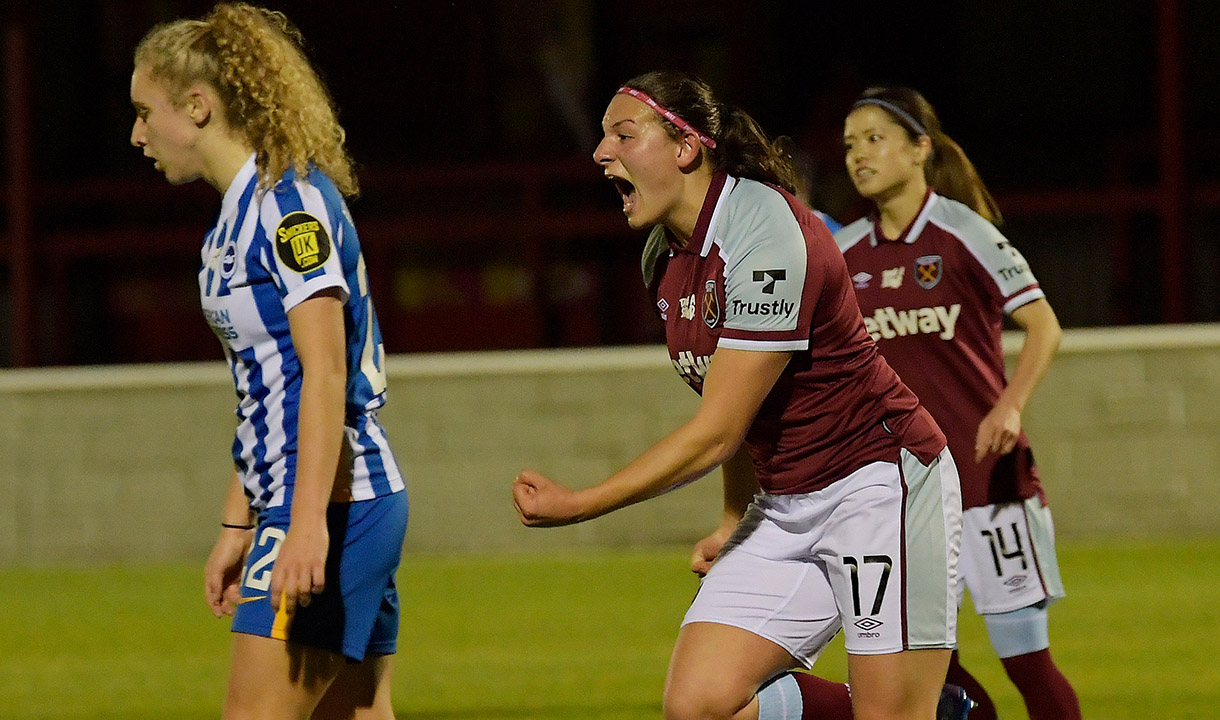 Mel Filis was delighted to score her first goal for West Ham United Women on Wednesday evening, as they beat Brighton & Hove Albion 3-0 to book their place in the quarter-finals of the Continental Tyres League Cup.

The 19-year-old midfielder scored the second goal just before half time, a powerful half volley that was struck with a good amount of power, leaving Brighton goalkeeper, Megan Walsh with no chance.

It means that the Hammers finish Group E with a 100% record, and also finish the calendar year unbeaten at home in the 2021/22 campaign.

Filis reflected on a great evening at the Chigwell Construction Stadium and also looked ahead to our final match of 2021, against Chelsea in the Barclays FA Women's Super League on Sunday.

Mel, a great win on Wednesday night, what did you make of the game?

"Yeah I thought it was a really professional performance, [head coach] Olli [Harder] talked to us before the game and said 'we’ve got to go out and a do a job tonight because we’re still undefeated at home', which is a big thing we’re chasing in comparison to last season, so I’m really proud of the squad.

"We rotated the team with myself coming in and a few of the other girls who haven’t had as many minutes, I think we all did really well, so we’re proud of each other."

You must be especially pleased as you managed to grab your first goal in Claret and Blue?

"As soon as the ball dropped down in the box I knew I was going to hit it and I took my moment so I’m really proud of myself for that. I feel like it’s come at a good time as well because it’s a nice little pick-me-up before we go into the second half of the season, and hopefully I can score some more goals."

It must be nice to now give the manager something to think about going forward?

"I feel a little bit of pressure when I get my opportunities, to come in and perform and try and plan that seed to trust me and give me more game time. As we’ve spoken about before, me being a young player, that’s what I’m striving for, I’m striving for regular minutes in this league. I’ll just keep doing what I’m doing and hopefully more will come."

You played in the league game against Brighton on the opening day of the WSL season, which we lost 2-0, so does this win feel like a little bit of revenge?

"It shows the quality that we have in this squad – we can compete with any team in the WSL, including Chelsea at the weekend, so I’m looking forward to that. I think as a whole team, compared to where we were at the end of pre-season we have improved so much and we’re doing that all across the board."

Since you’ve arrived here, you’ve made your WSL debut, scored your first goal and been involved with England U23s, you probably can’t have asked for much better…

"Yes, 100% - I feel like I’m in a really good spot in terms of my overall development. Like you said, being around the U23s for England is a really good spotlight. Sarina Wiegman and other coaches are all watching those games, so it’s good to be getting minutes there, with other players that are playing regularly in the WSL. I’m pushing to make the senior squad and hopefully one day that will be me."

A tough test against Chelsea in the WSL next up, and we can take the positives and the good feel around the camp into that game…

"Yeah, we should go into the game with no fear looking at what Reading were able to achieve against them last weekend. They’ve had the midweek game against Wolfsburg too so they will be potentially carrying the heavier legs into that game. I reckon we’ll be able freshen up and be ready for that game."