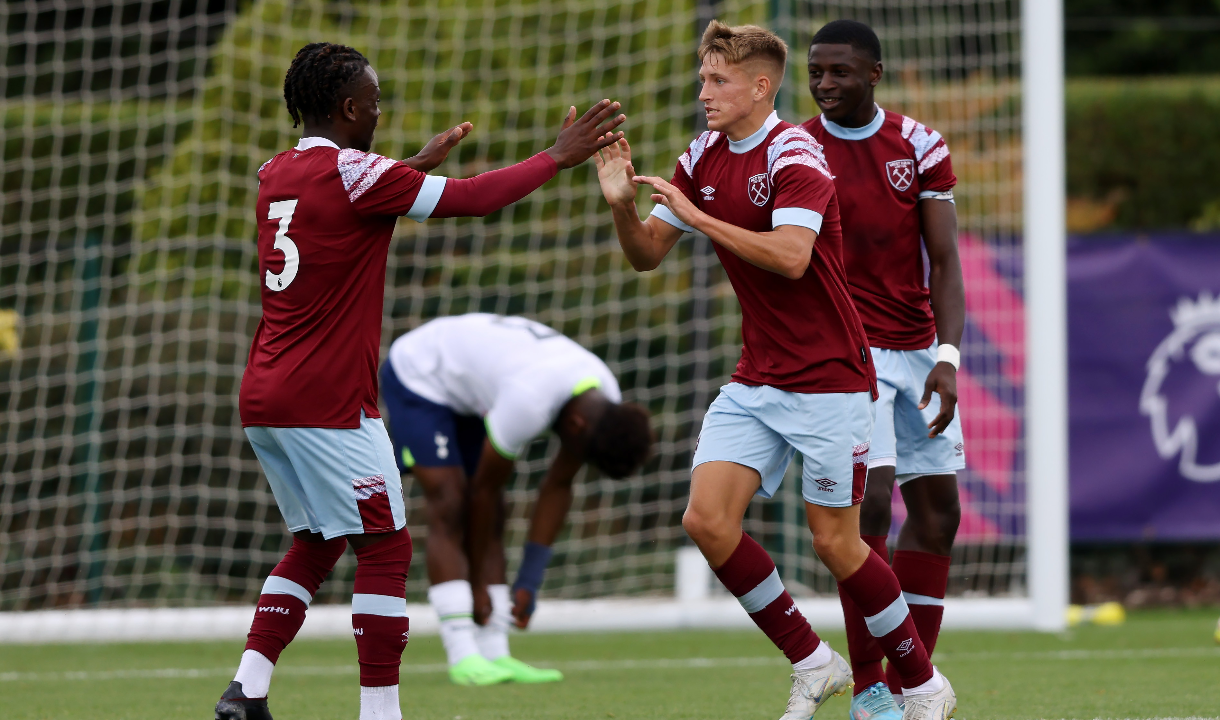 The young Hammers had fallen two goals behind inside 15 minutes against Palace in their opening Premier League U18s South fixture of the 2022/23 campaign, but Marshall's late finish at the end of the first half gave Kevin Keen's team hope.

The Northern Irishman would then net again nine minutes into the second period and late on, completing an incredible turnaround for the youngsters and securing himself the match-ball in the searing sunshine at the Crystal Palace Academy.

U18s lead coach Kevin Keen said: "We knew it was going to be a tough game. Crystal Palace have been one of the best teams in this league over the last could of years. They’ve won a lot of games over the last few years and finished in the top three, so they are a top side.

We don’t give up, we managed to come back, and I was really pleased with the way we did it.
Kevin Keen

“Our lads have worked so hard during pre-season, so it was tough to see us fall 2-0 down because we were playing well. They scored two in quick succession, and we felt unlucky to be behind because we had started well. But we don’t give up, we managed to come back, and I was really pleased with the way we did it, we played some great football and scored some fantastic goals.

“It was a real team effort, Mason Terry made a big save for us at the end, everyone worked hard, so it was very pleasing. We have only played one game though, so we have a long way to go, but it’s a nice start.”

Crystal Palace took the lead in the thirteenth minute despite a positive start from the Hammers. Kaelan Casey’s tackle stopped a dangerous attack from the home side but the ball rebounded to Freddie Bell, who curled an effort into the bottom right corner.

West Ham we’re unlucky not to equalise immediately after. George Earthy robbed possession from the Eagle’s defence and slid Marshall through after a driving run. The attacker's first effort of the game was well saved.

The hosts doubled their advantage on 15 minutes, giving the young Irons a mammoth task. The ball was well worked down the left flank and was eventually pulled back to Junior Dixon. The Palace No9 took a touch before slotting the ball past Mason Terry.

Keen’s side created a number of chances before the break, with Casey and Oliver Scarles both coming close to pulling a goal back.

West Ham’s pressure was eventually rewarded moments before the half time whistle, with the visitors being awarded a penalty. Marshall stepped up and placed the ball beyond the reach of Jackson Izquierdo.

West Ham found a deserved equaliser on 54 minutes after a fantastic move down the left flank. Earthy slid the ball through to Scarles, who, in turn, played a fantastic driven pass across the face of goal. Marshall was able to get his toe to the ball on the stretch to level the fixture.

Palace came close to retaking the lead with ten minutes remaining. The Eagles worked the ball well and out to Adler Nascimento, who cut in and smashed the ball towards the near post. Mason Terry was able to make a fantastic save with his right leg to deny the Palace winger.

Despite the soaring temperatures, West Ham found the energy to have one last push in the closing exchanges and the pressure paid off late on. Earthy was involved once again, threading a defence-splitting pass through to Marshall. The West Ham No7 struck a powerful effort; one that, that Izquierdo's best efforts, he was unable to keep from crossing the line.

The late winner sparked wild celebrations from the U18s, but the Hammers had to survive one late scare as Palace substitute Hindolo Mustapha volleyed an efffort towards the top corner. Terry was across superbly, however, to tip the ball behind for a corner, preserving a fantastic three points on the opening day.

Lead coach Keen was delighted to start the new campaign with a deserved victory and a pleasing performance.

"If you look at this time last year, we were playing very well but we lost two of our first four games, which then made it difficult as we were then playing catch up. But in terms of today, it is the performance that has pleased me the most.

“As long as we play like that every week, we will take the results as they come, because I couldn’t have asked for anymore from the lads today.

Keen also reserved praise for goalscorer Marshall while also hailing the togetherness of the entire squad.

"Callum has a natural talent for scoring goals, but it’s his industry and work rate for the team that all the lads love. He will chase after every ball, put defenders under pressure, and play for the team.

“He is a real team player and he has done really well since joining.

“There is a real togetherness in this group, and not just within the players, also within the staff. It was a very exciting opening game of the season, but we don’t want to get carried away, there is a lot more hard work to do.”