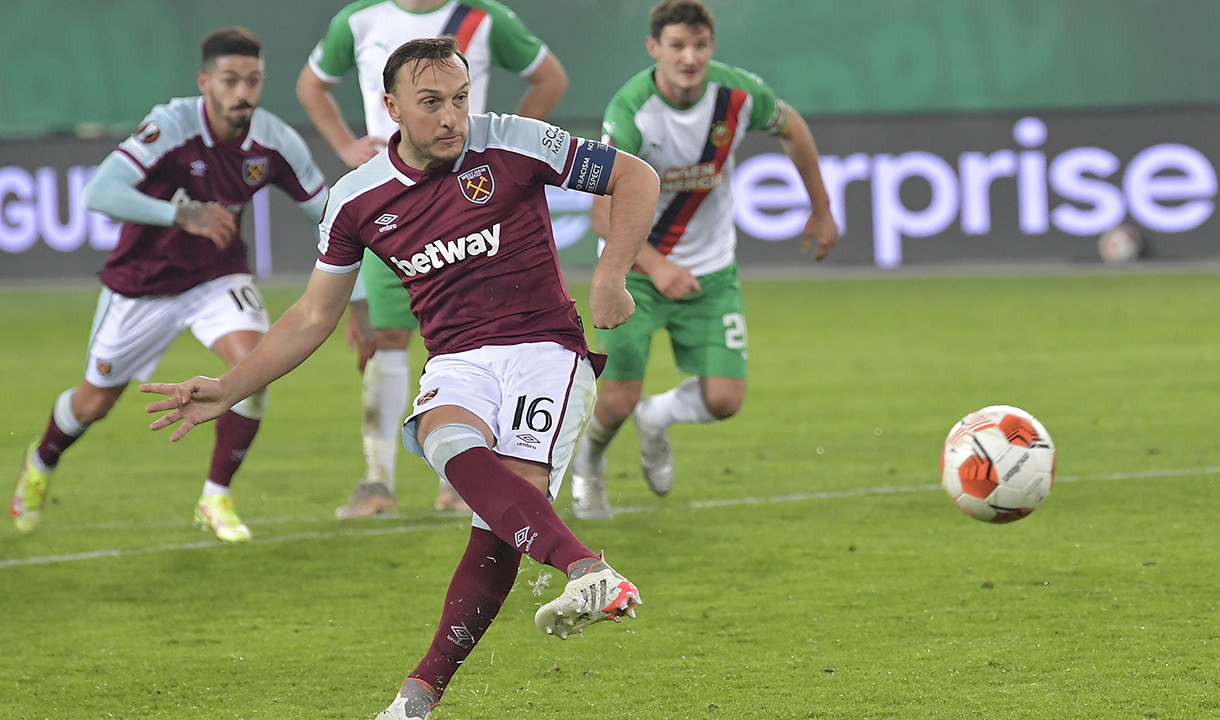 The Hammers’ skipper was a typically composed and commanding presence in midfield at Allianz Stadion, and could be heard - with no fans present - guiding his teammates to a professional 2-0 win over Rapid Vienna, a result which secured top spot in the group.

Noble was also on target with a precise penalty kick in first-half stoppage time, putting his team in a commanding position after Andriy Yarmolenko – who had opened the scoring moments prior with a far-post header – had won the spot-kick with some quick feet.

With the 2-0 win and top spot in Group H comes the reward of direct progression to the Europa League’s Round of 16, meaning that West Ham will avoid an additional play-off round tie against a UEFA Champions League team dropping into the tournament.

“I think we probably could have scored two or three more if we were clinical,” Noble reflected.

“Our finishing probably wasn’t as good as it should have been tonight, but I think we played well enough to win the game. We were a bit sloppy at times, but we had an away game at Wolves on Saturday and have had a lot of travelling.

"Obviously the manager changed the team quite a bit and I thought the boys who came in did great, and we got the three points we wanted to go through top.

“For me, coming to play in Europe in my last year, it was fantastic [to score], and obviously with the way we’re playing in the Premier League at the minute, to come first in the group stages of this competition is fantastic.

“We’ve got one more game in a couple of weeks [against Dinamo Zagreb at London Stadium], and then we don’t play [in Europe] again until March, so that’s great for us [with our busy upcoming schedule].”

Noble felt that the timing of his and Yarmolenko’s goals – shortly before the half-time whistle – proved crucial in granting the Hammers a degree of comfort on away soil.

We just need to keep our players fit, keep playing well, and deal with the last 16 when it comes

Played in the surreal surroundings of an empty Allianz Stadion – COVID-19 restrictions imposed by the Austrian government meant that Thursday’s match was played behind closed doors – Noble and his teammates went on to create numerous further opportunities in the second half, Rapid Vienna struggling to match West Ham as the visitors went up the gears.

“I think it was very important,” Noble noted. “We’d had two or three chances which we didn’t quite finish.

“Jarrod [Bowen] had one and I think Yarmo had one – and then Yarmo got a great header with a really good ball from Niki [Nikola Vlašić], and then obviously there was a penalty from myself. It made it more comfortable for us going in at half-time.

“They were a good side. We learnt that from [the game at] London Stadium, we knew they wouldn’t stop fighting and they play good football, the boys were just a little bit too strong for them tonight.”

Noble and West Ham’s attentions will now turn sharply towards a trip to Manchester City’s Etihad Stadium in the Premier League on Sunday.

The captain – typically focused, typically diligent – admitted he will not think too far ahead about potential Europa League opponents and, with West Ham’s knockout round tie not now scheduled until March, prefers to focus on the next task in hand.

He concluded: “Obviously there are dreams – you can always dream – but there are some top, top teams in this competition.

“Yes, we’ve come first in our group, a tough group, but I still think that there’s a lot of work to do and obviously the further you go into the competition, the better the teams you get, so we’ve got a long way to go until we get into the next round.

“We’ve a lot of games to play before then, so hopefully we can keep pushing on in the Premier League. We’ve got a tough Carabao Cup quarter-final against Tottenham too.

“We just need to keep our players fit, keep playing well, and deal with the last 16 when it comes.”