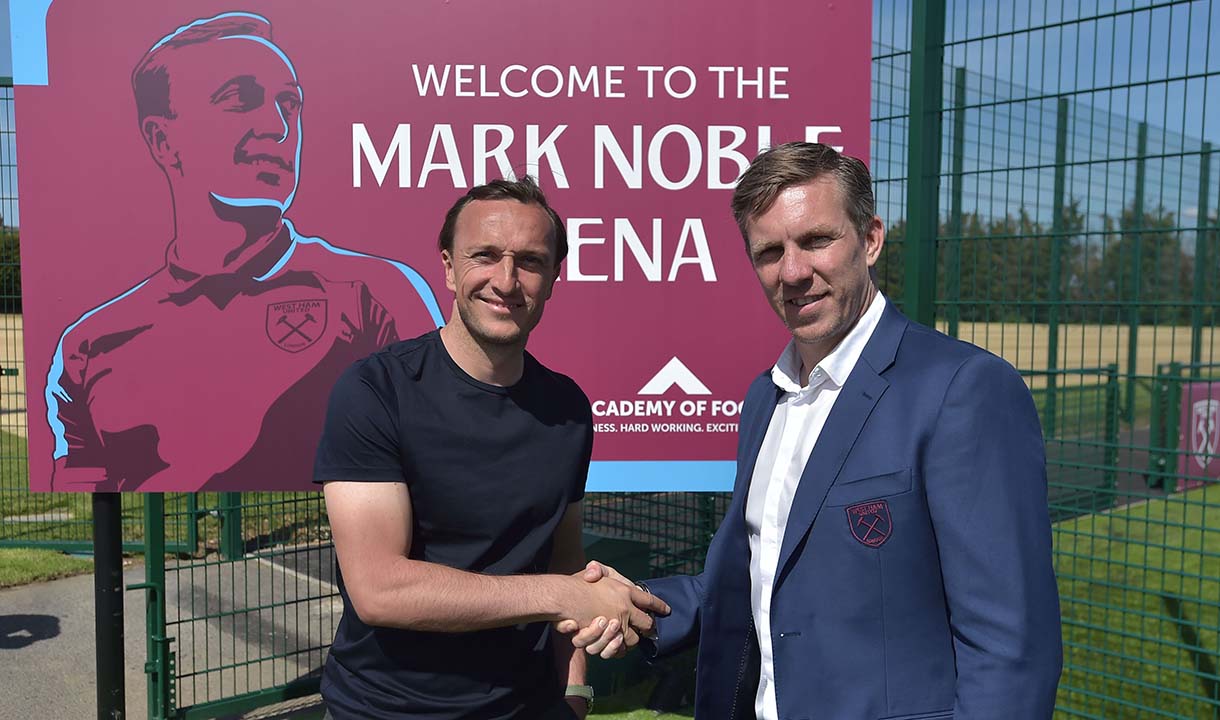 West Ham United is delighted to announce that a new Academy development pitch at Chadwell Heath is to be named The Mark Noble Arena, in honour of our retiring Club Captain.

The state-of-the-art, all-weather surface has the FIFA Quality Pro mark, specifically tested to mimic the high performance and safety requirements for professional football and will provide our Academy scholars of all ages with a first-class training facility all year round.

The pitch has also been enhanced with new fencing and a dedicated spectator area, and is branded with bespoke artwork and imagery paying tribute to Noble’s career and status as one of the greatest Academy graduates of modern times.

It comes just days after Noble received an emotional and touching send-off from West Ham supporters in his final home match for the Club at London Stadium after 18 years as a first-team player with almost 550 appearances to his name, and is the second permanent tribute the Hammers have announced in his honour, following the renaming of the Young Hammer of the Year award.

Mark Noble said: “I am truly honoured to have this new Academy facility named after me. Chadwell Heath has a very special place in my heart – it’s where I first kicked a ball for West Ham United, where I grew up as a player and as a person, and where I learned so much from so many good people.

“There is so much great work that goes on behind the scenes at the Academy – all the coaches and support staff who devote their time to developing the players on the pitch and also instilling the standards and values off the pitch that are so important. It’s wonderful that they have such fantastic facilities here at Chadwell Heath now, because it has helped to create a really special environment.”

Academy Manager Ricky Martin added: “We are proud and privileged to be able to unveil The Mark Noble Arena at Chadwell Heath. Mark is a wonderful ambassador for West Ham United and the Academy in particular. He is adored and respected by everyone here – the staff, the players, their parents and families – and there could be no one better to receive this accolade, after all that he given and the legacy he has created.

“The unveiling of the new development pitch is another magnificent step forward for the Academy – an enhancement that will provide such a superb facility for our young players, right the way through all of the age groups. It is a great example of how we continue to build and grow for the benefit of our young players, and being able to honour Mark Noble in this way makes it even more special.”

Joint-Chairmen David Sullivan and David Gold said: “This is another significant and deserved tribute to Mark Noble as he comes to the end of his magnificent 18-year playing career at West Ham United. It ensures that his service to the Club will never be forgotten. We know that, whatever the future holds, Mark Noble will forever be connected to West Ham United and our Academy – he represents everything it stands for and is the perfect inspiration and example to every young player who arrives at Chadwell Heath.”

The development pitch is the latest enhancement for the benefit of the Club’s Academy scholars at Chadwell Heath, which underwent a £4million redevelopment in 2019.