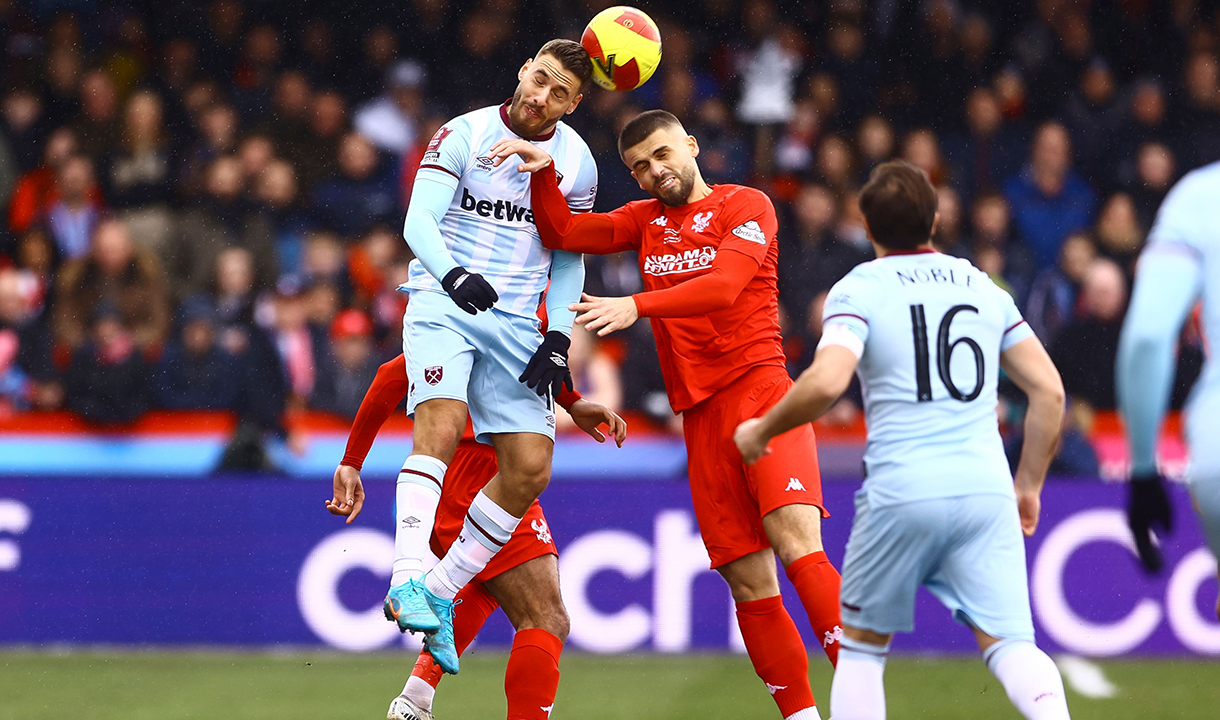 West Ham United struck in the closing seconds of both normal time and extra-time to defeat a spirited Kidderminster Harriers team in the Emirates FA Cup fourth round.

The Irons looked set to finish on the wrong end of an enormous upset at Aggborough Stadium after Luke Penny stabbed home a loose ball after 20 minutes to put the National League North hosts into the lead.

West Ham struggled for fluency in regulation time but were inspired by the introduction of Declan Rice at half-time, the England international stamping his authority on the tie by driving into the box and smashing into the roof of the net in the first minute of stoppage time.

Then, just as a quiet additional 30 minutes looked set to yield penalty kicks, a deflected effort fell kindly for Aaron Cresswell, who teed up Jarrod Bowen to send the Hammers through from close range in the final seconds of an FA Cup fourth-round epic.

A mark of respect for Kidderminster’s achievement in reaching this stage, West Ham manager David Moyes named a team full of experience for the fourth-round tie.

Mark Noble led out the Hammers on his 540th first-team appearance, with five other full internationals also lining up in Claret and Blue at Aggborough Stadium.

It was also only the second time West Ham faced Kidderminster in the FA Cup, after Lee Chapman's header saw Billy Bonds' side edge past Harriers in the fifth round in February 1994.

Evocative of that day, the match was preceded by all the bustling fanfare you would come to expect of a National League North side welcoming a side five leagues, and 114 places, higher than them in the domestic footballing pyramid.

All of that paved way prior to kick-off for a touching minute's applause in memory of Isla Caton. Every person in attendance was on their feet in tribute to our brave little Hammer, who sadly passed away at the age of seven following a five-year fight with neuroblastoma.

Then, in defiance of heavy wind in Worcestershire, the game kicked off.

Such was the strength of the bluster at Aggborough Stadium that neither side was really able to settle in the opening exchanges, a passage of head tennis in the opening seconds setting the tone for the half to come.

The first shot came after five minutes from an unlikely source in Ben Johnson. The full-back, cutting in from the left, had plenty of time to line up his strike from 30 yards following a short corner involving Noble, but blazed his effort high and wide.

Kidderminster showed they were not simply there for the occasion, however, with Sam Austin hitting a rising drive from the edge of the box which was smartly handled by Areola, before the Frenchman enjoyed a more routine stop from Ashley Hemmings’ bobbling effort.

In truth, the hosts were the quicker to get going, and merited the lead which Penny supplied them with on 19 minutes.

A whipped free-kick into the box from Nathan Cameron – to an extent diverted by the wind – led to Areola and Issa Diop colliding, the ball spilling for Penny to side-foot a volley past the covering defender on the line.

Despite West Ham’s shock, momentum remained with Kidderminster, and following a Diop foul on the edge of the ‘D’, Omari Sterling was next to come close, his dipping 25-yard free-kick hitting Areola’s stanchion.

When the Hammers did manage to break through the home team’s well-organised lines – most often through the direct running of Nikola Vlašić and Saïd Benrahma – their final ball tended to peter out on a choppy pitch.

The two teams traded a succession of corners which their respective centre-backs dealt with, and a poor opening period was summed up by a wayward Benrahma strike from 30 yards on the stroke of half-time, the Algerian’s effort never truly threatening Luke Simpson in the Kidderminster goal.

The half-time introduction of Declan Rice from the bench – and perhaps a stern word or two from the coaching staff – seemed to inspire an improved passage of play after half-time.

A driving run from the England international early in the second half led to Rice puling back for Benrahma to sidefoot ten yards out, but the effort blocked by several lunging Harriers defenders.

Soon after, another set-piece saw Cameron threaten to double Kidderminster’s lead, but the defender headed over from beneath Areola’s crossbar when he perhaps ought to have scored.

When the Hammers did finally manage to get their foot on the ball on the hour mark, their creative talent started to show.

An inventive flick from Andriy Yarmolenko on the right afforded space for Jarrod Bowen to fire a low strike through the defender’s legs towards the near post. Kidderminster ‘keeper Simpson, to his credit, produced an outstanding low stop, before his defender Cameron jumped up to block the No20’s rebound.

Moments later, Benrahma picked the ball out wide and jinked inside another defender, hitting a dipping effort which skipped up and needed shovelling behind by Simpson.

As the game entered its final quarter, manager Moyes introduced further experienced substitutes in an effort to give his side greater thrust in the conditions.

It was one of those substitutes, Tomáš Souček, who scooped a left-footed half-volley over the crossbar from Benrahma’s deflected cross with 15 minutes remaining.

It looked like West Ham's race had been run when Benrahma exchanged passes with Yarmolenko eight yards out before curling goalwards from a tight angle, only for Simpson to pluck the effort out of the air.

Then, right at the death, with less than two minutes of injury time remaining, Rice intervened.

The England international embodied the influence he has had on the Irons’ season to date, charging into the area to collect Pablo Fornals' pass, cut inside two defenders and lash a magnificent finish into the roof of the net.

Soon after, Rice laced an effort wide of the mark from 25 yards from Benrahma’s lay-off, and the match was destined to be settled in extra-time.

The Hammers furthered that attacking momentum in the opening stages of the additional period, Bowen finding the side-netting when well-placed in the box.

Benrahma then came close to finding Bowen six yards out, only for Caleb Richards to intervene, and second-half substitute Aaron Cresswell was not too far away from finding the top corner with a dipping 30-yard free-kick.

Moyes' side thought they might have taken the lead five minutes into the second half of extra-time, but Yarmolenko was flagged offside prior to squaring for Bowen to tap in.

Both sides appeared to tire as extra-time wore on, and penalties seemed for much of the second half to be inevitable.

But once again, there was to be one final twist – and again, it was in West Ham’s favour.

Yarmolenko’s shot from the corner of the box deflected kindly into the path of Cresswell inside the six-yard box, and the No3 calmly played the ball back for Bowen to score with the simplest of finishes – and secure his side’s place in the fifth round in the process.