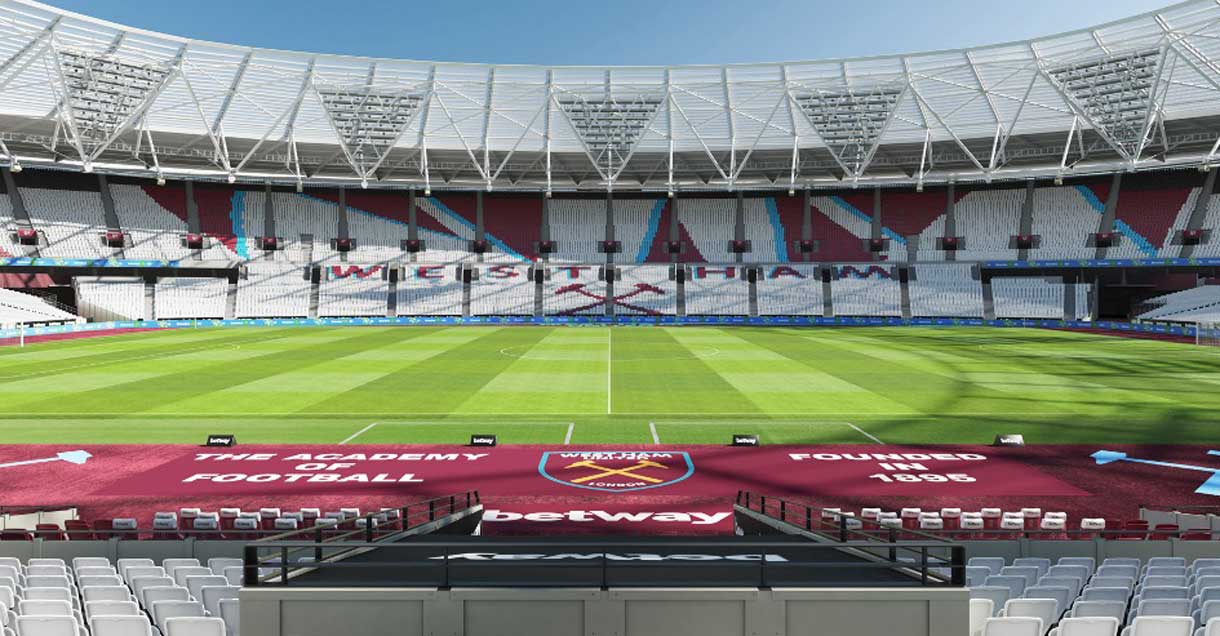 West Ham United is delighted to inform supporters of a range of hugely exciting developments and improvements to London Stadium ahead of the 2022/23 season, all of which align with our continued commitment to enhancing their matchday experience.

These advancements come at a time of great excitement and anticipation for West Ham United and our Claret and Blue Army, with David Moyes’ team enjoying another successful Premier League campaign and competing in the latter stages of European competition.

Alongside success on the pitch, the Club’s overriding priority is to work with fans and listen to their feedback to ensure a continued improvement in the matchday experience at London Stadium – from our Season Ticket Holders, Club London Members and match-attending fans, to those following from afar and across our digital channels.

The Club can confirm that:

*Subject to the amended general safety certificate being issued by Newham Council.

West Ham United Vice-Chairman Baroness Brady said: “We are always listening to our supporters and working hard to improve their experience at London Stadium, in line with the fantastic feedback we’ve received from them. The expected increase in capacity will see London Stadium become one of the highest-attended grounds in the capital and indeed the country, giving an even greater number of our supporters the opportunity to watch our exciting team in action.

"We have had some fantastic moments at London Stadium this season, including memorable Premier League wins against Tottenham, Liverpool and Chelsea and, of course, the unforgettable night and atmosphere against Sevilla in the UEFA Europa League, and we thank supporters for their continued fantastic backing. This is another great sign of progression during a hugely positive time for the Club.”

Manager David Moyes added: “Everyone here is doing everything we can to grow and develop this Club, on and off the pitch, for the benefit of our supporters, and we all feel that things are moving in the right direction. The atmosphere our supporters have created this season has been right up there in every game. Having more fans in the ground cheering the team on will make it even better for us all and we are really looking forward to welcoming more of our young supporters and families to London Stadium.”

Thank you once again for your loyal and passionate support. 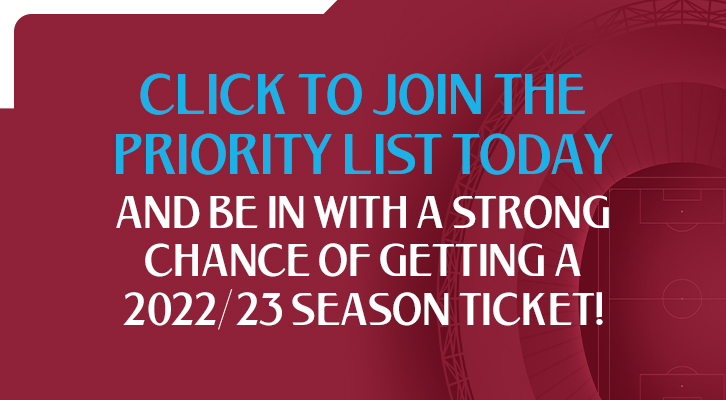 What does this mean for me?

The matchday capacity at London Stadium is expected to increase to 62,500 for the start of the 2022-23 season, subject to the safety certificate being issued and in agreement with Newham Council and planning authority LLDC. With demand for tickets currently at an all-time high, we are looking forward to again breaking the Club’s attendance record and welcoming more of our loyal supporters to matches next season.

Tickets for our UEFA Europa League quarter-final first leg tie against Olympique Lyonnais sold out in record time to Season Ticket holders, and victory over six-time winners Sevilla in the previous round marked the highest number of West Ham supporters ever to attend a home fixture.

The significant increase is another positive step forward for the Club in ultimately reaching the stadium’s full capacity, which would see West Ham United’s home in the Queen Elizabeth Olympic Park become the biggest Premier League ground in London.

Existing Priority List members who expressed their seating preference last summer will soon be contacted by the Club as there is a strong chance they will be given the opportunity to secure a Season Ticket for the 2022/23 campaign. With thousands more seats on offer, those yet to join the Priority List can do so for just £10. Seats are likely to be snapped up fast, but the best chance you’ll have to be sure you are there is to

My seat is located in the West Stand Lower Tier. What does this reconfiguration mean for me?

The expected capacity increase at London Stadium will be delivered largely thanks to the exciting new reconfiguration of the West Stand lower tier. This will see the addition of 1,800 new seats in optimal positions within the stadium, allowing even more supporters to enjoy the match from one of the most sought-after areas of the ground, right in the thick of the action.

The redesign will provide a further upgrade to the stadium, following the updates to the North and South Stands ahead of the 2021/22 season. The changes will increase connectivity to the upper tier, enhancing the matchday experience and atmosphere, and continue the overall aesthetic improvements.

The Club has personally contacted supporters in the West Stand to keep them updated on the reconfiguration. Those supporters will soon be provided with bespoke information relating to their individual situation.

Club London Members will also be contacted directly by their dedicated Relationship Manager to discuss their options, should they have any queries.

Pricing and Ticketing Bands for the 2022/23 season

As well as the West Stand reconfiguration, a further 800 seats are expected to be added to other areas of the stadium, ensuring more tickets are available at an entry level price as part of the Club’s continued commitment to affordable family football. The majority of these will be located in a new price Band 6, with Season Tickets starting from just £99 for juniors and £299 for adults.

The Club are also introducing two further additional ticketing bands. First, a new 1966 West, which will replicate the hugely popular 1966 seats in the Billy Bonds Stand. Demand for our 1966 East seats is incredibly high, so these new, padded seats in the most sought-after area of the ground will provide supporters with the opportunity to enjoy an additional premium experience within our General Admissions offering.

Secondly, the Club’s junior concession pricing, which was previously capped at Under 16, has been increased to include Under 18s, meaning young supporters can enjoy discounted rates for an extra two years and demonstrates the Club’s desire to provide affordable football for all including young people and families.

After two seasons of price freezes across the board, supporters are advised that there will be an uplift on some of our Season Ticket prices for 2022/23, with a cost-per-game increase from just 79p in the lowest band to just over £5 in the highest band. Club London Members will also see a small price rise, where applicable, for the 2022/23 season.

For the 2022/23 season, and based on member feedback, we will continue our ongoing efforts to deliver improvements to the Club London matchday. As a result of the West Stand reconfiguration, more of our valued Club London Members will also be able to enjoy the game from the lower tier, bringing them closer to the action.

The Club has personally contacted Club London Members to keep them updated on the reconfiguration and they are being provided with bespoke information relating to their individual membership. Members will also be contacted directly by their dedicated Relationship Manager to discuss their options, should they have any queries.

Also, as a result of the increased number of seats in the West Stand we are exploring options for an exciting, new and exclusive facility within Club London. To be the first to hear about this, fill in the form here to register your interest.

The Season Ticket renewal period for the 2022/23 campaign will commence on Friday 8 April and close on Tuesday 7 June 2022.

Renewing will be a simple and convenient process with supporters urged to log in to their personal West Ham United account, where their ticket reservation will automatically appear from 2pm on Friday.

Season Ticket holders located in the West Stand lower tier will then have an exclusive window in which to discuss their options for relocating their Season Tickets should they wish to. Similarly, Club London Members will be able to contact their dedicated Relationship Manager with any queries.

Once the Season Ticket renewal period closes on Tuesday 7 June, the relocation process will commence. As a priority, West Stand Season Ticket holders will be first in line to relocate should they wish to. Following this, all other renewing supporters will have the chance to relocate, with those who renewed earliest given priority.

Any supporters with Club Cash balances will be able to redeem this against their Season Ticket purchase should they so desire.

Supporters who deferred or transferred their 2021/22 Season Ticket

Last summer, the Club extended its option to allow supporters who were still not comfortable returning to London Stadium for the 2021/22 season to either defer their Season Ticket, or transfer it to a friend, at no cost. The Club will be contacting these supporters individually to understand their current situation and ensure they feel comfortable to return for the 2022/23 campaign.

As part of our ongoing commitment to help our supporters throughout the COVID-19 pandemic and now all restrictions have been lifted, the Club will be offering all Season Ticket holders who were unable to renew during the pandemic-affected seasons of 2020/21 and 2021/22 the opportunity to return to London Stadium as a Season Ticket holder.

These supporters will be contacted by the Club and offered a dedicated window in which to speak to a member of the Ticket Office, who will be delighted to welcome them back as a Season Ticket holder at London Stadium for the 2022/23 campaign.

The expected stadium expansion will result in an increased number of seats and Season Tickets for 2022/23, meaning that supporters who have been waiting patiently for a Season Ticket on the Priority List will be able to take their place at London Stadium next season.

Olli Harder’s side have enjoyed a fine season to date this term, with an FA Cup semi-final against Manchester City on the horizon, and plenty to play for in the Barclays FA Women’s Super League between now and the end of the campaign.

You don’t want to miss out in 2022/23, for what promises to be another season to remember for the Hammers.

Season Tickets will go on General Sale from Tuesday 7 June.