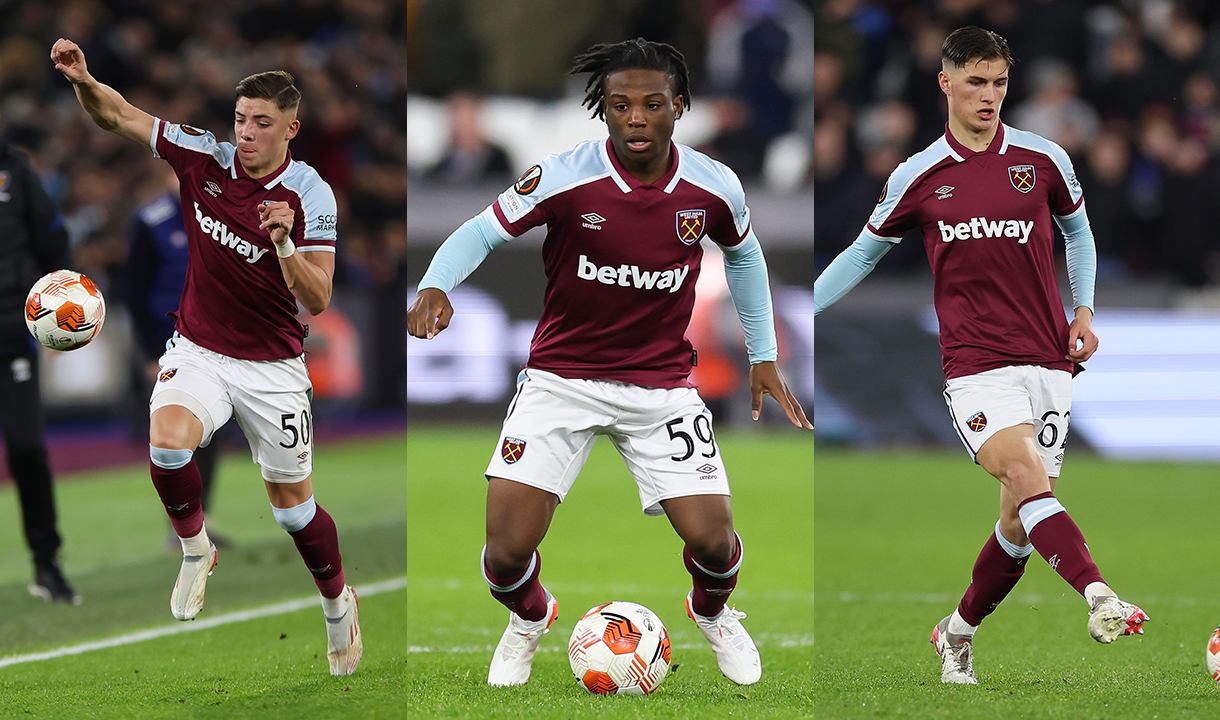 Harrison Ashby, Keenan Forson and Freddie Potts reflect on ‘massive’ night for the Academy of Football

While West Ham United admittedly did not get the result they wanted from Thursday’s 1-0 UEFA Europa League defeat to GNK Dinamo Zagreb, for many the fixture at London Stadium marked the culmination of years and years of blood, sweat, tears – and pride.

For their friends and families, to Academy Manager Ricky Martin and the multitudes of coaches covering age groups from Under-23s down to Under-9s; from performance psychologists and player care departments, to medical teams to kitmen, education departments to administration or recruitment, their teammates and the hundreds of other staff based across Chadwell Heath and Rush Green training grounds…

For those hundreds and hundreds of people, Thursday was an evening of celebration.

The Academy of Football ⚒ pic.twitter.com/cwXexBGsbf

With the Hammers safely through to the round of 16, manager David Moyes took the opportunity to reward some of the Club's young players for their individual and collective form and potential, having watched the U23s top Premier League 2 Division 1 this season.

Playing for the first time in front of around 50,000 supporters – a far cry from the more modest couple-of-hundred attendances commonplace in Premier League 2 – and relishing their backing, the young lads did themselves – and the Academy family – proud.

Speaking to West Ham TV after the final whistle, three such graduates – 20-year-old Harrison Ashby, who played in front of supporters for the first time; and 20-year-old Keenan Forson and 18-year-old Freddie Potts, debutants – reflected on a night they will never forget.

Harrison, how long will you remember that night for?

“As I said, a year and a half ago [after my full debut at London Stadium against Hull City], I wanted to make a proper statement in front of all of the fans, and I think today – I’m proud of these two as well – I think most of the boys did that.

“I think most of the boys have shown what they can do. We did exactly what we’ve done with the U23s, so it’s a moment I’ll personally always remember for myself, and for these two as well.

“It’s good to do it with them, because I’ve obviously been with Keenan since we were 12 or 13, so it’s good for that.”

A moment of quality settled the game from Dinamo’s Mislav Oršić – does that illustrate the standard to aspire to?

“I think it’s just one of those goals where it’s one in a thousand. I think every other time he does it, it’s not going to go in, but fair play to him because he’s hit it top bins and I don’t think any of us could do much about it!

“Other than that, if that goal hadn’t gone in, I think we would’ve kept a clean sheet and we’d have had a lot of chances to probably go ahead in the game. I think a lot of the chances came from the young lads, so today’s been a good day for all of us.”

What will tonight mean not only to you, but the hundreds of aspiring players at the Academy of Football?

“It’s massive. It shows that there’s a big pathway and a lot of things can change quickly, with injuries and stuff.

“It shows that the young lads can perform like they did tonight, and it puts pressure on other people. There’s definitely a massive pathway for the young lads to push through.”

Keenan, what did tonight mean to you?

“What an experience! I still have mixed emotions. I’m just grateful for the opportunity. Thanks to God as well.

“I’m proud to have done this with my teammates here, because we’ve been doing so well with the U23s, so I feel like we deserved it tonight and I’m really happy for everyone who’s made a debut.”

“I didn’t know I was going to get into the squad until two days ago, but obviously these lads were training over with the first team and that’s where I wanted to be.

“I did get the call up and I’m really happy for that. It’s been a long week, but a really exciting one. I’ve been having dreams about coming on and I’ve really enjoyed it tonight.”

Is there anyone you’d like to thank for making your West Ham United debut?

“Thanks to a few of the coaches as well, who have been with me through the age groups. I remember, when I first came in, it was Gerard [Prenderville] who saw me, then Kev Keen, Marl [Phillips], Steve [Potts], Dmitri [Halajko]… and thank you to the manager for giving me an opportunity tonight.”

Freddie, you only made your U23s debut back in January – and now here you are, a senior West Ham United player!

“To be fair, it’s been a good year in terms of breaking through the age groups! Like Keenan said, the U23s are doing so well this year and this season, I think we all deserved our chance tonight.

“No matter if we started, or came on like Keenan and I did, I thought we all tried to make a statement and we all did a good job today.”

You’re probably used to smaller crowds than this, but as a lifelong West Ham fan…

“It was an unbelievable place to play tonight.

“I thought it was just a good night in general for all of us.”

Is there anyone you’d like to thank for making your West Ham United debut?

“I can’t really single out one single coach. I think everyone’s played their part, whether it’s the coaching departments or the physios who’ve helped me coming through injuries… I just want to thank everyone in the Academy for helping us along this journey – not only me, but also these boys, and the other lads who started tonight.

“It was just a massive achievement that we can thank everyone at the Academy for.”