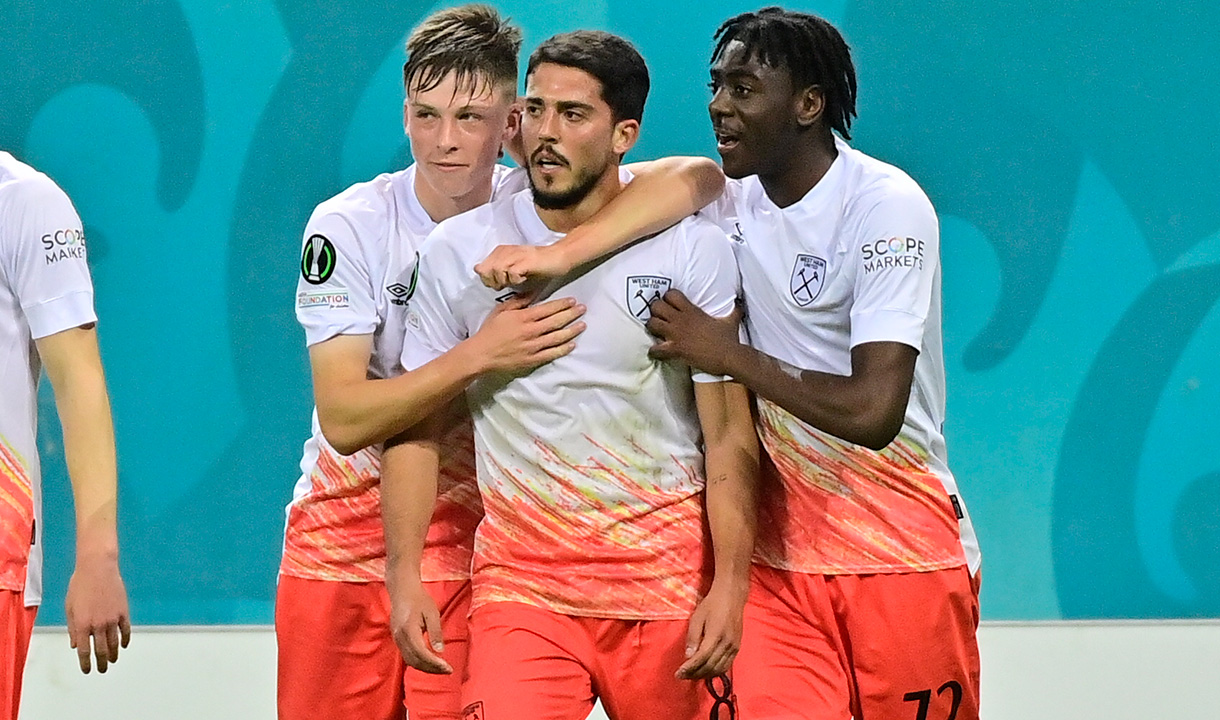 Hammers go six from six in Group B at FCSB

West Ham United became the first side to progress from the UEFA Europa Conference League group stage with a 100 per cent record as a much-changed side comfortably beat FCSB 3-0 at National Arena.

A sixth win from six Group B matches was led by Pablo Fornals, who capped his 150th appearance in Claret and Blue with a brace – striking a goal either side of the break.

In between the Spaniard’s two strikes, the travelling Claret and Blue Army saw Divin Mubama, on his debut, run to celebrate emphatically, having played a crucial role in the Irons’ second of the night – a goal that would be later awarded as a Joyskim Dawa own-goal.

With a three-goal margin – and Ollie Scarles, who become the sixth youngest player to feature for the senior team, Kaelan Casey and Kamarai Swyer also making their debuts - a youthful Hammers’ side concluded Group B with a style and poise beyond their years.

From the off, the Irons made their superiority clear as the Academy of Football shone in Bucharest.

The first half brought a hatful of chances, as the Hammers challenged their opponents at both ends of the pitch – the best of which fell to Mubama, who impressed leading the line.

After Vladimír Coufal found Flynn Downes, the ball was played across the six-yard box, but agonisingly out of reach of the young Hammers striker. The ball then almost deflected into his path when Fornals recovered the attack well and saw his shot spilt by FCSB shot-stopper Ștefan Târnovanu.

Later, Scarles, who became West Ham United’s sixth youngest debutant, produced a wicked cross into the path of his fellow debutant Mubama. But the Hammers No72 would be denied by an outstretched leg from Târnovanu, while Downes then almost netted his first goal in Claret and Blue but the FCSB keeper sprung to his left to deny the No12’s flicked shot.

The Irons’ pressure eventually told when Fornals capped his 150th appearance for West Ham United with a well-taken goal to give the Hammers a lead by the interval. Found by a great forward pass from Ben Johnson, the No8 broke through on goal and found the net with ease - slotting the ball past Târnovanu with a left-footed strike to move the Hammers in front with 40 minutes played.

Impressive throughout down the left, Scarles showed he more than had the eye for a pass or two as the second-half began. The 16-year-old showed his array of passing qualities and then whipped a delicious cross through the six-yard box that somehow evaded his teammates.

His fellow debutant, Mubama looked to have capped the night with his first goal for the senior team. He peeled to the back post and headed home – with the aid of slight deflection – to double the Irons lead four minutes before the hour, although the goal was later ruled as an own-goal.

Fornals would then add a third for the Hammers when a Scarles cross was fumbled by Târnovanu, leaving the No8 to make no mistake and powerfully strike into the bottom corner from inside the area.

With just over twenty minutes to be played, Moyes introduced three more members of the Academy of Football as Keenan Appiah-Forson, Freddie Potts and Harrison Ashby entered the field.

There would then be further debutants as Swyer and Casey were brought on in the closing stages taking the total of players from the Academy of Football to feature in Bucharest to nine  – four starters and five from the substitutes’ bench.

The Irons played out the final ten minutes with an impressive nous for such a young group of players, although a crucial late save from Alphonse Areola ensured the Irons kept their third clean sheet of the Group B campaign and that no gloss would be taken off an eighth straight win in European competition this season.