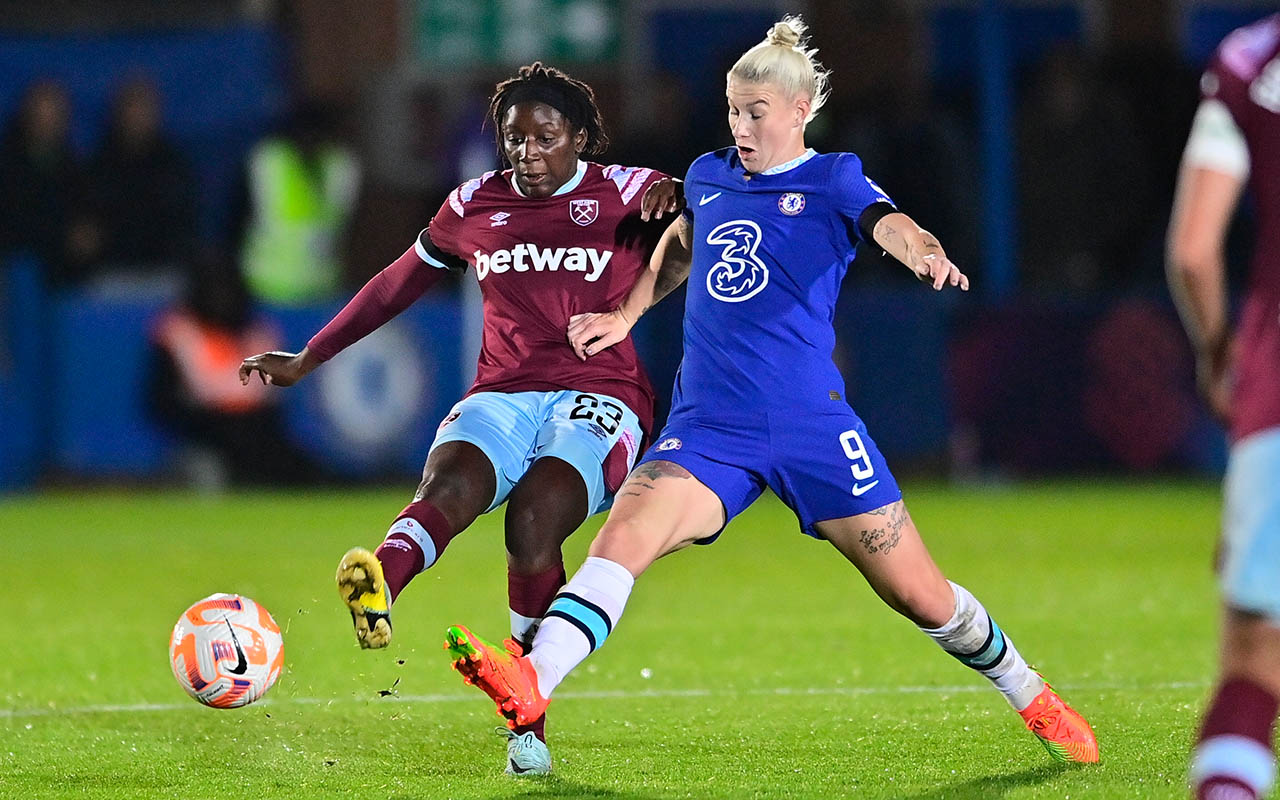 Dagný Brynjarsdóttir gave the Irons the best possible start in west London when she headed home after only three minutes.

Fran Kirby levelled the game just before the break after consistent pressure from the home side.

In the second half, Chelsea’s quality shone through, as goals from Sam Kerr and Millie Bright secured the victory under the lights at Kingsmeadow for the home side.

Konchesky made two changes for the trip to west London, with Grace Fisk and Abbey-Leigh Stringer coming in for their first starts of the 2022/23 campaign.

The Irons were on the front foot in the opening stages at Kingsmeadow, with Lisa Evans doing well to force Kadeisha Buchanan into giving away a corner.

The resulting delivery from Kirsty Smith found the captain Brynjarsdóttir, who emphatically headed home to give the Hammers the lead inside three minutes.

Chelsea looked to respond and pull the scoreline level almost immediately, but Mackenize Arnold showed cat-like reflexes to keep the ball out of her net on nine minutes, when a flick on looked to be heading into the net.

Kerr was next to try and bring the game level, but her shot struck the outside of the post after she skipped away from Hawa Cissoko.

The Australian was the usual livewire upfront for the home side, and she went close again after spinning away from Lucy Parker, but her effort landed narrowly wide of the right-hand post.

More chances came Chelsea’s way, with Guro Reiten firing wide. By and large, though, the Irons were defending valiantly against the champions in the opening 35 minutes.

However, the Hammer couldn’t hold on to the lead going into half-time, with Kirby stabbing home a leveller on 41 minutes, her third in as many matches.

Early in the second half, Bright should have really converted the home side’s second of the game, but the centre-back could only head wide from close range.

A similar pattern ensued, as it had in the first half at Kingsmeadow, with Chelsea dominating the play, and West Ham looking to break when possible.

Smith and Lisa Evans combined well down the right, but the attack was thwarted by ex-Hammer, Kateřina Svitková.

Kerr gave Chelsea the breakthrough on 58 minutes, poking the ball home after a ricochet in the penalty area.

Bright then headed in a third only four minutes later as Chelsea turned on the style and steamed ahead in the London derby.

Thea Kyvåg was introduced as Konchesky looked to find a way back into the game. The young Norway U19 international had an effort saved by Berger on 76 minutes.

Only a minute later, Parker fouled Chelsea substitute Lauren James inside the area.The 20-year-old picked herself up, only for her penalty to be well saved by Arnold.

The game concluded without incident, as Chelsea took the victory, although the Hammers can be proud of their showing against the champions.