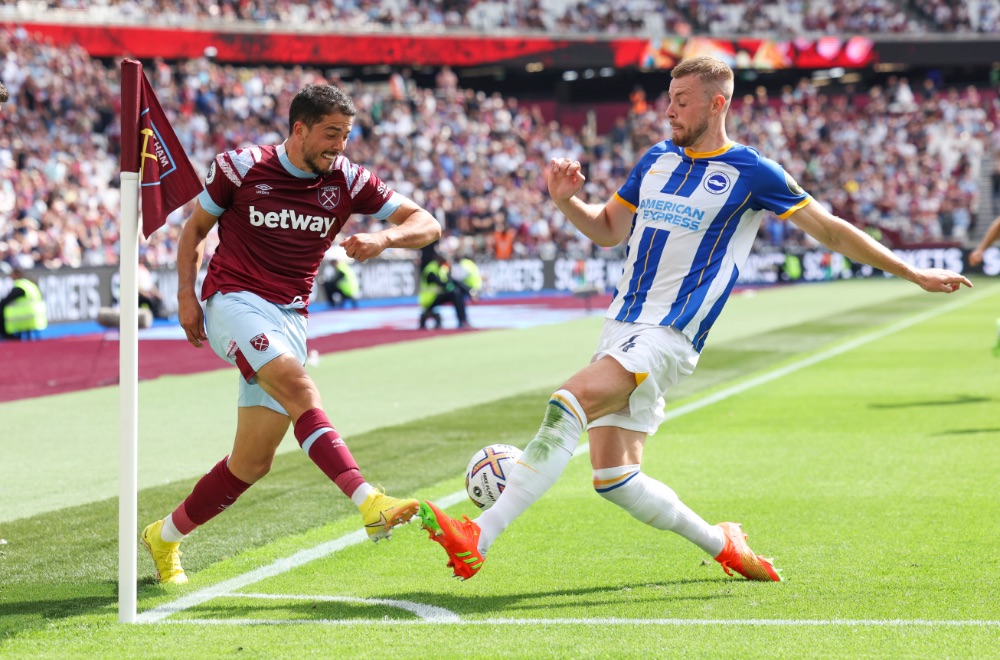 Mac Allister opened the scoring from the spot midway through the first half after Thilo Kehrer brought down Danny Welbeck inside the penalty area.

And while Aaron Cresswell and Declan Rice did go close as the Hammers pushed for an equaliser, Trossard doubled the Brighton lead from close range with just over twenty minutes to go.

Despite late headed efforts from Bowen and Tomáš Souček, the Hammers would fall to defeat in their 500th home match in the Premier League era.

The result might have been different had West Ham converted some early chances. Roared on by a sell-out 62,449 crowd, Saïd Benrahma broke down the left, but his curling effort went narrowly wide of the Brighton post. And while that early attacking momentum later fashioned chances for Michail Antonio and Bowen to stretch the visitors’ defence, it was Brighton who struck first on the counter-attack.

Once Kurt Zouma was dispossessed, the Hammers were outnumbered, and after Trossard picked out Welbeck, Kehrer stretched, but only brought down the advancing Welbeck, and saw the visitors awarded a penalty after a lengthy VAR check. Mac Allister then stepped up to net the opening goal midway through the first half. He rolled the ball past Łukasz Fabiański, who guessed the wrong way.

Brighton did threaten a second goal before the break, as Trossard saw a half-chance dip a yard or so wide of the back post, and a Moisés Caicedo shot was also earlier blocked by Bowen.

In the second half, Kehrer put the penalty incident behind him and made a good recovering tackle, while at the other end Benrahma was crowded out and unable to squeeze an effort at the Brighton goal.

The Hammers continued to ask questions about the visitors’ resistance. Rice saw his blocked strike from the edge of the area drift wide, while both Cresswell and Souček were denied by blocks from Joël Veltman and Adam Webster respectively. Pablo Fornals also worked Robert Sánchez with a strike from distance.

Brighton though struck a decisive second after a flick from Pascal Groß saw Trossard break free from the Hammers’ defence, with the Belgium forward striking past Fabiański from close range.

In the closing moments, the Hammers looked to have found a way back into the match, but Sánchez did well to tip headers from both Souček and Bowen over the bar, as Graham Potter’s side held on for victory in east London.