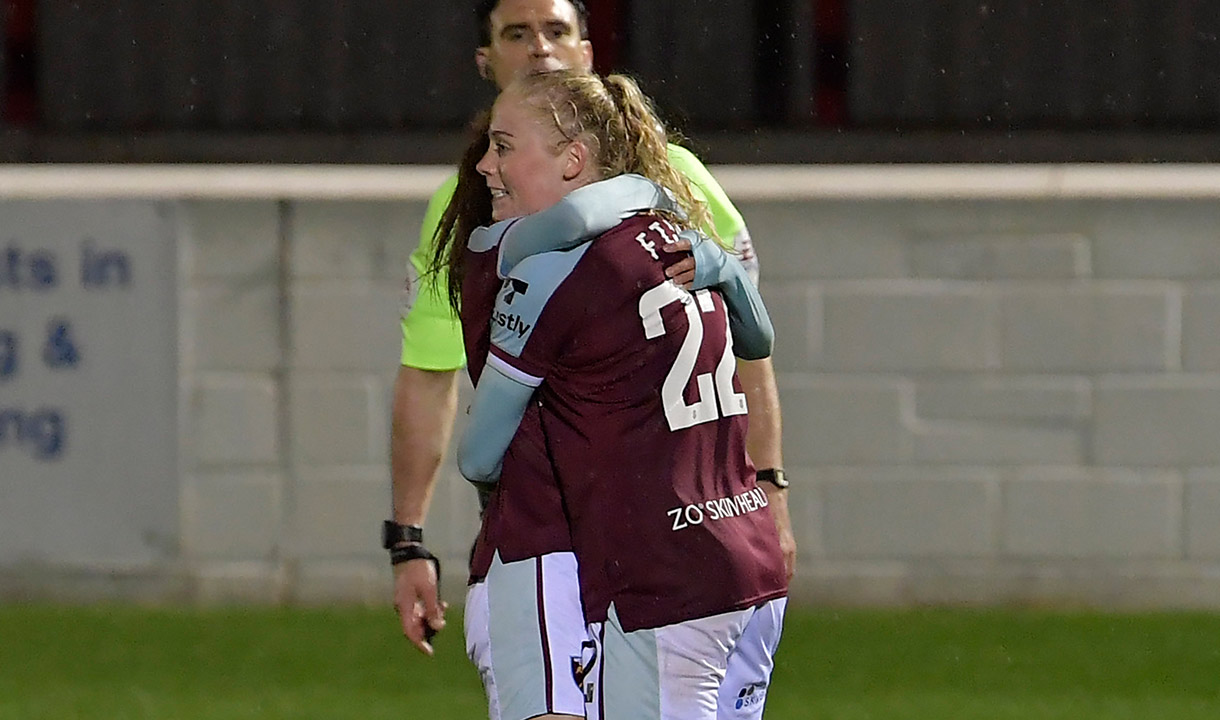 Grace Fisk cancelled out Ella Toone earlier goal with a header in the dying embers of the game to share the spoils in east London.

The point means that West Ham United stay sixth, but they have now collected 24 points, the highest amount they have achieved since joining the Barclays FA Women’s Super League.

Manager Olli Harder has elected to make four changes to the side that beat Birmingham City on Sunday afternoon for this evening's league outing against the Red Devils.

Mackenzie Arnold, Fisk, Tameka Yallop and Yui Hasegawa all come back into the team for the match at Dagenham & Redbridge Stadium.
Anna Leat, Lucy Parker, Emma Snerle and Claudia Walker all drop to the bench as Harder rotated the team ahead of their third fixture in six days.

The first chance of the game fell the way of Yallop, who tested Mary Earps with a header from close range, but the ‘keeper was able to gather the ball at the second attempt.

The conditions made things difficult for both teams, and Hawa Cissoko was almost caught out after her heavy touch almost presented an opportunity to Leah Galton, but the French defender recovered brilliantly to cover the onrushing Mackenzie Arnold, who Galton had rounded.

Another chance went begging for United when former West Ham forward, Martha Thomas couldn’t quite get her head on a deep cross from the edge of the area.

The Hammers lacked quality in the final third in the opening exchanges, with a good example of that Kateřina Svitková’s poor cross from the right that evaded everyone.

Arnold was called into action to deny a long-range effort from Katie Zelem, with Fisk then mopping up the rebound.

Arnold then had to be alert to deny Jackie Groenen – her sliced effort almost landing in the bottom corner.

But the two sides went in at half-time level in tercherous conditions at the Chigwell Construction Stadium.

With less than a minute gone in the second half, Arnold had to be alert to deny a powerful effort from Alessia Russo, who stung the palms of the Australian goalkeeper.

United continued to have the better of the opportunities, but the Irons were resilient with their defensive efforts – that was until a ball wasn’t cleared away and Ella Toone was able to acrobatically find the net, with the aid of a deflection.

Yallop almost brought the game level only four minutes later, but she didn’t make the desired contact with Svitková’s cross.

The Australian midfielder then went close again, as Gilly Flaherty turned provider, but Yallop header was saved by Earps in the United goal.

Kate Longhurst did superbly to get something on a wonderful cross that almost certainly denied Russo from grabbing her teams’ second of the game.

The Hammers continued to probe the United goal, but they away side were stubborn at the back, with Adriana Leon feeding on scraps for the majority of the game.

Svitková should have levelled the game in injury time, but her header landed narrowly wide of the post.

But it would be Grace Fisk who would have the final say, as she got on the end of a late corner for the Hammers, flicking the ball into the back of the net to salvage a point in the dying embers of the match.