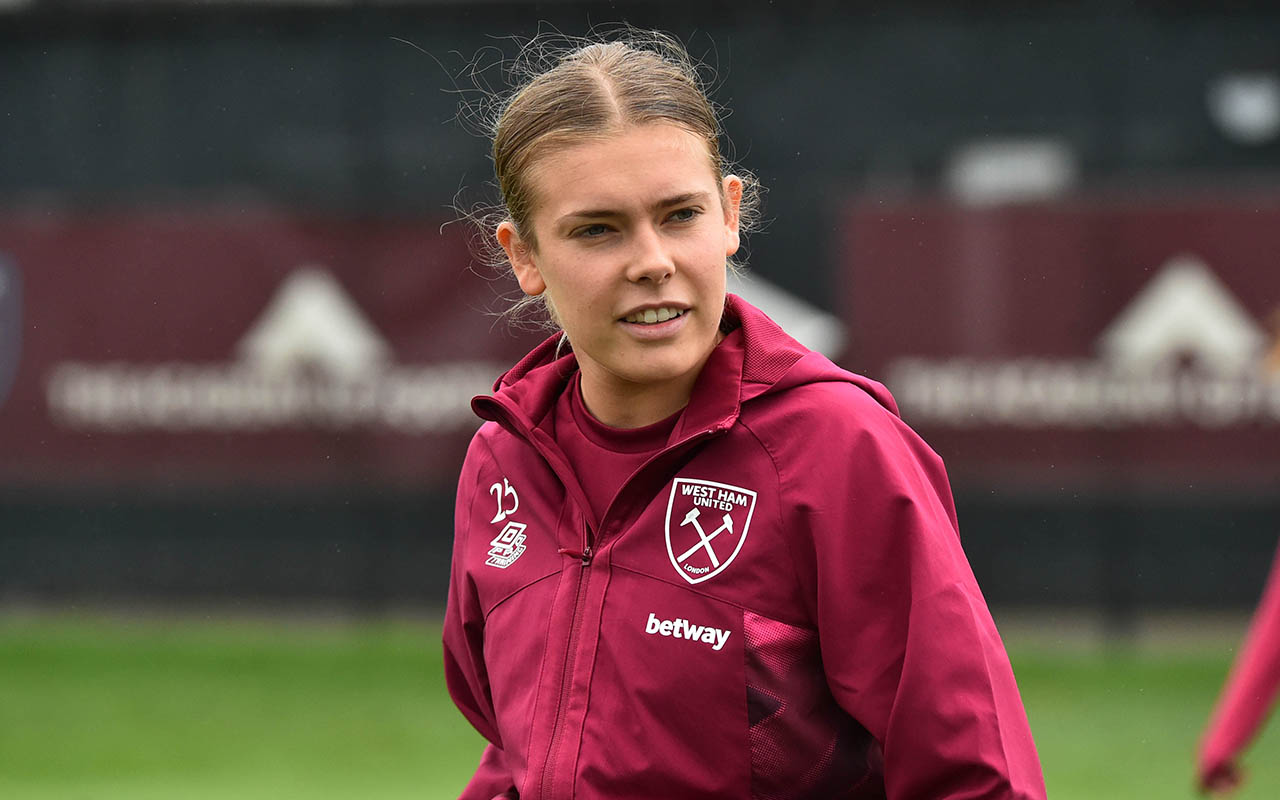 Garrad: I'm enjoying the best of both worlds with West Ham United and Watford

Grace Garrad knew that something was missing after her first season with West Ham United.

The 19-year-old made four first team appearances in her debut season in Claret and Blue – and after a successful pre-season with the Hammers earlier this summer, the young defender decided to sign dual-registration terms with FA Women’s National League side Watford in August.

The agreement between the two clubs has allowed Garrad to get vital minutes for the Hornets as she continues to develop as a footballer, while she also returns to West Ham’s Chadwell Heath Training Ground to work with the first-team when her schedule allows.

And ‘GG’, as she is affectionately known to everyone at Chadwell, has enjoyed the best of both worlds so far this season.

“All of the girls have been really welcoming and I’ve made a really good start there. The standard of football is really good, and I’m getting the balance of being able to train with West Ham a couple of times a week, whilst also playing regular football.

“It’s the best of both worlds to be honest. I’m grateful that I get the opportunity to still be here and around the girls, whilst also being with my teammates at Watford.”

Garrad signed for West Ham United in the summer of 2021, making the move across the Capital having left Arsenal to pursue a new opportunity.

Whilst Garrad was limited in the way of first team minutes, she gained valuable experience day-in day-out at Chadwell Heath, as she trained amongst a number of international players.

But regular first-team football was what Garrad was after. So this season, she made the switch to the Hornets, who are looking to gain promotion back to the Barclays Women’s Championship having been relegated last season.

Garrad has played in 10 of Watford’s eleven matches so far this season – and has become a crucial player for Head Coach Damon Lathrope.

Primarily operating at left-back and centre-back, Garrad has also found the back of the net on two occasions – once in the National League in a 6-0 rout of Cheltenham Town, and more recently, when Garrad scored a 120th-minute winner in style against AFC Wimbledon in the FA Women’s National League Cup first round.

The defender believes that the amount of playing time that she is currently getting can only be a good thing for her moving forward.

“Having played quite a lot of minutes during pre-season here at West Ham and then heading over to Watford and getting stuck into the National league campaign, it’s been really good.

"I’ve gotten a lot of games under my belt, which I haven’t been able to do previously because of the quality of players ahead of me here, plus I’ve not had the best luck with injuries since I joined the Club.

"It’s important that I get this experience now, at a young age – you can’t beat playing matches and I’m loving playing at the moment,” Garrad beamed.

It can sometimes be difficult heading into a new environment, particularly as a young player. But Garrad has felt nothing but love from her new teammates at Watford, who have welcomed her in with open arms.

“I knew a couple of the girls from previous clubs, so that made the initial few days a lot easier, but it was all really seamless. They’re a fantastic bunch and they’ve really welcomed me into the team.

"I think being able to slot myself into the first-team straight away has helped with that. I don’t think I could have made a better start to my time with them if I’d wanted to and I’m really pleased that I was able to fit in very easily."

Watford’s ambitions as a club are to get back into the Championship having been relegated on the final day of the 2021/22 season, and Garrad hopes that she can help the team in that endeavour.

“We’ve started the season really well and we’re in a good position at the moment having only lost one league game.

"It’s a really tough league with clubs like Oxford and Portsmouth all in the mix, so we need to make sure that we continue with the good form that we’ve shown so far,” Garrad concluded.

Watford Women are back in action on Sunday, when they take on Billericay Town at Vale Park.

For West Ham United, they return from the international break with a Barclays Women’s Super League home match against Leicester City.

Come down and support the women’s team as they look to get back to winning ways at Chigwell Construction Stadium in Dagenham. Click on the graphic below to purchase your tickets!