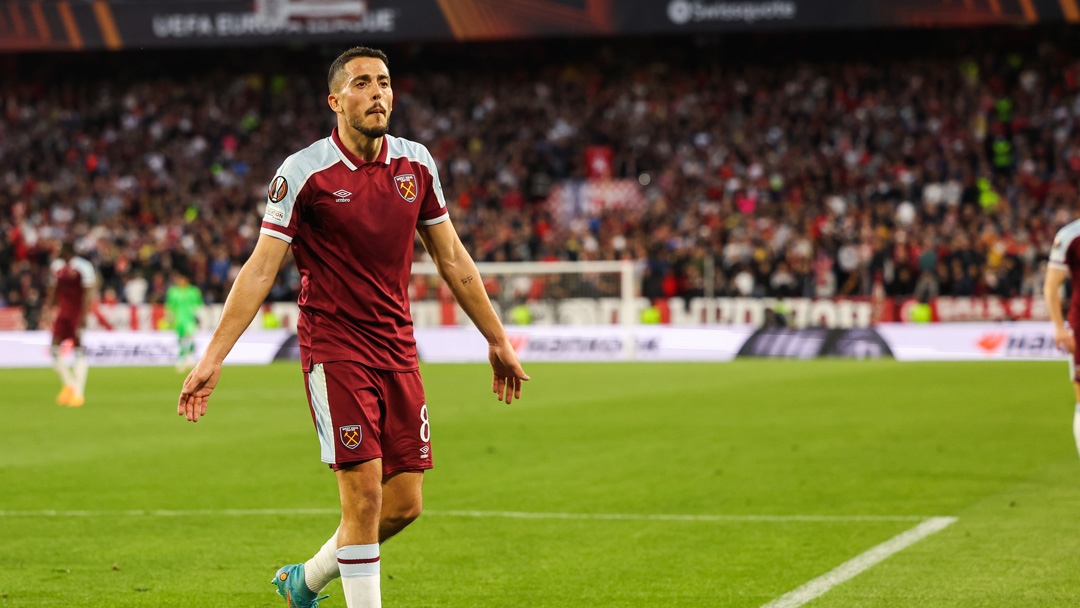 Fornals: Playing in Seville was an unbelievable experience

Pablo Fornals’ homecoming may have ended in a 1-0 defeat in Seville, but the midfielder says West Ham United’s UEFA Europa League future remains in our own hands.

The Spain international was roared on by thousands upon thousands of Hammers fans at the Ramón Sánchez-Pizjuán, including his sister, best friend and mother, who made a surprise appearance after travelling 450 miles from the family home in Castellón de la Plana on Spain’s Mediterranean coast.

While the result may have been disappointing, Fornals was proud of the way his team player in his homeland, and prouder still to perform in front of his beloved Mum for the first time on Spanish soil.

“I think it’s my first time here for the Club when I could play in my country,” he told West Ham TV. “I was really lucky today. My Mum came as a surprise, one of my best friends as well, my sister came also, so I was really happy and I last saw them there and I just tried to give them a hug and say how much I love my family.

“Playing here in front of all of these West Ham fans was unbelievable and how they supported us for the 90 minutes, I can’t wait to see how they’re going to do it at our home!”

Fornals knows Sevilla’s quality better than any West Ham player, having played against them five times during his career in La Liga with Malaga and Villarreal, and he was not surprised by the way the record six-times Europa League winners approached Thursday’s round of 16 first leg.

The visitors traded blows with their hosts for 60 minutes, going close through Nikola Vlašić’s header, which was saved, Manuel Lanzini’s shot, which drifted wide, and Fornals’ own strike, which was blocked.

Those missed opportunities cost West Ham dear as Morocco striker Munir slammed in the only goal of the first-leg tie on the hour-mark.

But, while he is fully aware of the La Liga club’s qualities, the No8 also believes in his own team and reckons on the Irons’ chances of turning things around at a sold-out London Stadium to reach the quarter-finals.

“Here, against one of the best teams in this competition for the last ten years, we played face to face against them,” he said.

“We wanted just to test our level against a team like that, is why we play football: to play against the best teams.

“For a few periods we were really close to scoring goals, to make it a difficult game is what we tried to do for a long time, and also being just one goal down, we try until the end because that is how we play.”