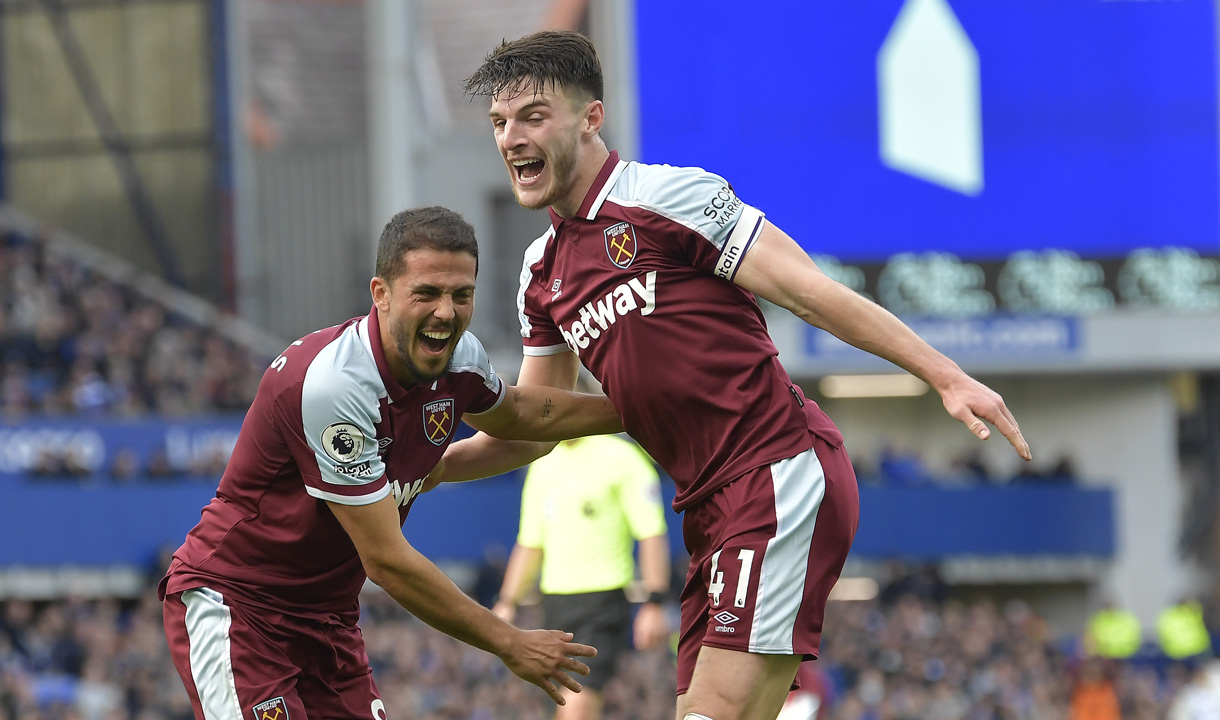 Declan Rice: I want to improve my attacking output for West Ham United

Declan Rice has already scored and assisted more goals than in any other season in his West Ham United career – but he wants to take his attacking output to an even higher level.

The 23-year-old has scored four goals, assisted four more and played his part in numerous others this term, helping the Hammers challenge for a top-six Premier League finish for the second straight year and reach the last 16 of the UEFA Europa League and FA Cup, including scoring a last-gasp equaliser at Kidderminster Harriers last weekend.

Rice’s increased confidence in his ability to drive the team forward and both create and score himself was drawn from his outstanding performances for both West Ham and England, who he helped reach the final of the UEFA European Championship finals last summer.

But the ambitious midfielder is determined to make an even greater influence and impact in the final third in the future, revealing in an interview with French broadcaster Canal+ ahead of Sunday’s Premier League trip to Leicester City that scoring more goals is his number one target area for improvement in his game.

How would you sum up the season to date?

“The season is going really well so far. We’ve played a lot of games and we’re fourth in the Premier League, which is a real positive. After the season we had last year, when we got Europa League, we said this year that we wanted to push on and we’ve done that.

You’ve already scored four goals and assisted four more this season – both career highs – so how has that come about?

“I just have more confidence this season. I know my ability and what I can do on the football pitch and I think since the Euros in the summer I’ve gained a lot of confidence on the pitch and it’s helped me out. When I’m on the pitch with West Ham, I’m always out there trying to do my best to help the team out defensive and to try to score some goals and luckily enough I’ve been able to do that this season.”

You’ve also captained the team on the pitch many times, too. How does that make you feel?

“I’m really proud. It’s a really good thing to do. Obviously when Mark Noble doesn’t play I have the armband and it’s a real privilege and it’s an honour to captain West Ham. It’s a massive Club and to walk out at London Stadium, especially with how well we’re doing at the minute, is really good and a real positive so it’s an amazing feeling.”

The former Leeds United and France midfielder Olivier Dacourt told Canal+ you are the best English midfielder. What do you think about that?

“Of course, it’s nice to hear those words so ‘thank you’ to him for saying that as it’s obviously really nice. I’ve still got a long way to go to get to the really big levels I can get to. I feel I can get better. At the top, there are top English midfielders like Jude Bellingham and other players in the Premier League as well. Luckily enough I’m having a good season, but hopefully I can keep pushing and get better.”

What do you think you can still improve in your game?

“I feel like I can score more goals, definitely. I feel like I can get forward more and feel like I can impact games more with passes and attacking outputs. I get into good positions in games and sometimes I pass the ball where top players of the past would have shot and scored, so I feel adding goals to my game is somewhere I can improve.”