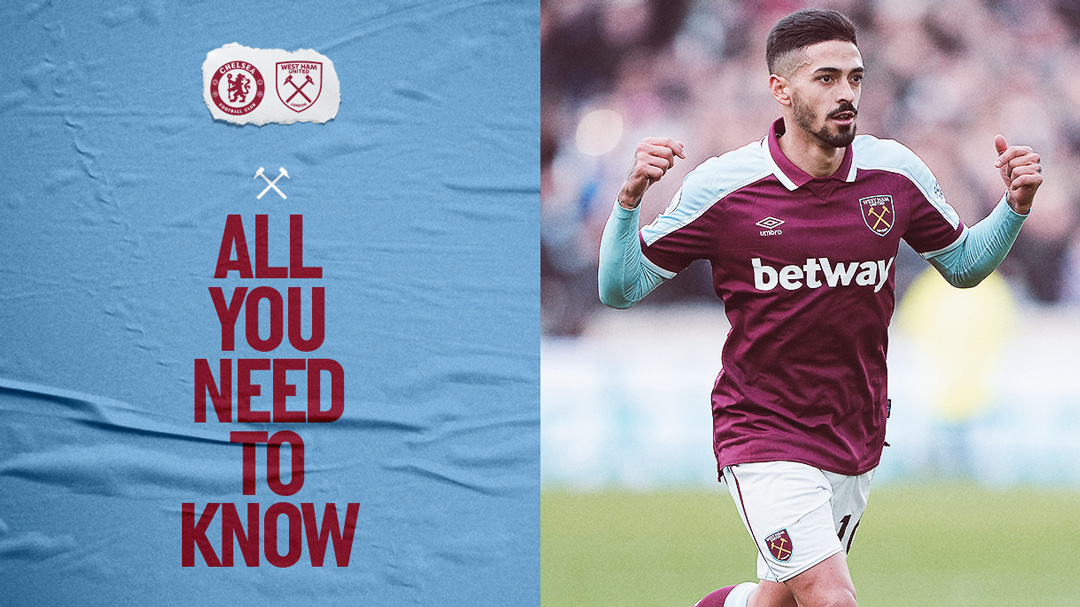 Chelsea v West Ham United - All You Need To Know

West Ham United head to west London for the 34th match of the Premier League season when we face Chelsea on Sunday afternoon.

We've reached the business end of the 2021/22 campaign and, as was the case a year ago, European qualification is the potential reward if the Hammers can finish strongly.

The Irons sit seventh in the table going into the weekend, two points behind Manchester United and three ahead of Wolverhampton Wanderers. A top-seven finish would see David Moyes' men playing European football again next term, with fifth and sixth going into the UEFA Europa League and seventh into the UEFA Conference League.

Chelsea, meanwhile, look in good shape to finish in the top four and qualify for next season's UEFA Champions League - a tournament they won for the second time last year.

Both teams have midweek commitments next week, with West Ham hosting Eintracht Frankfurt in the Europa League semi-final first leg, and Thomas Tuchel's Chelsea travelling to Manchester United in the Premier League on Thursday evening.

However, this derby will be at the forefront of everybody's minds, with the Irons seeking to complete a memorable double over their west London rivals, having scored a thrilling 3-2 win over Chelsea at London Stadium in early December.

Tickets for Sunday's game sold out to Season Ticket Holders and Bondholders, but there remain opportunities to watch West Ham United live this season.

Seats for our home Premier League games with Arsenal on Sunday 1 May and Manchester City on Sunday 15 May are available on the Ticket Exchange. Click here to be at London Stadium!

West Ham United could be without centre-back Kurt Zouma, who suffered a twisted ankle sustained in the Premier League defeat at Brentford on Sunday 10 April.

Zouma's fellow defender Angelo Ogbonna is still unavailable after undergoing knee surgery before Christmas, but is working his way back to fitness at Rush Green.

A third centre-back, Issa Diop, suffered an ankle injury in the closing stages of the Premier League fixture with Burnley on Sunday 17 April.

Chelsea's sole confirmed injury absence is England left-back Ben Chilwell, who is out with a long-term knee ligament injury.

Thomas Tuchel has made a big impact since his arrival at Chelsea in January 2021, winning 54 of his 85 matches in charge and losing just 12.

In those 85 games, Tuchel's Blues have conceded just 61 goals, while scoring 150 at the attacking end of the pitch.

The likes of England internationals Mason Mount and Reece James, Brazil veteran Thiago Silva and Croatia midfielder Mateo Kovačić have been standout performers this season, but Chelsea's strength in depth means Tuchel has an embarrassment of riches available to him in his large and talented squad.

However, the Premier League title and a second consecutive UEFA Champions League title are beyond Chelsea's reach and the FA Cup represents Tuchel's one remaining chance to lift a trophy this season.

Off the pitch, uncertainty hovers over Stamford Bridge, with the UK Government freezing owner Roman Abramovich's assets and issuing the Club a special licence to continue footballing activities while restricting ticket and merchandise sales in March. The sale of the club to prospective new owners is expected to be completed in the near future.

West Ham United and Chelsea meet for the 52nd time in the Premier League on Sunday afternoon.

The Blues have won 27 of the previous 51 games between the two London clubs, with West Ham winning 15 and nine ending in draws.

We were beaten 3-0 at Stamford Bridge last season, but we have enjoyed some memorable days there in the Premier League era, though, including a 1-0 victory achieved in November 2019.

Our most memorable visit to Chelsea in living memory was a 4-0 victory achieved in March 1986, when Frank McAvennie, Tony Cottee (two) and Alan Devonshire got the goals as John Lyall’s side continued their march towards a record-high third-place Division One finish.

He has refereed West Ham United on 33 occasions, including the penultimate game at the Boleyn Ground against Swansea City in May 2016, and most-recently the 2-1 Premier League win over Everton at London Stadium on 3 April this year.