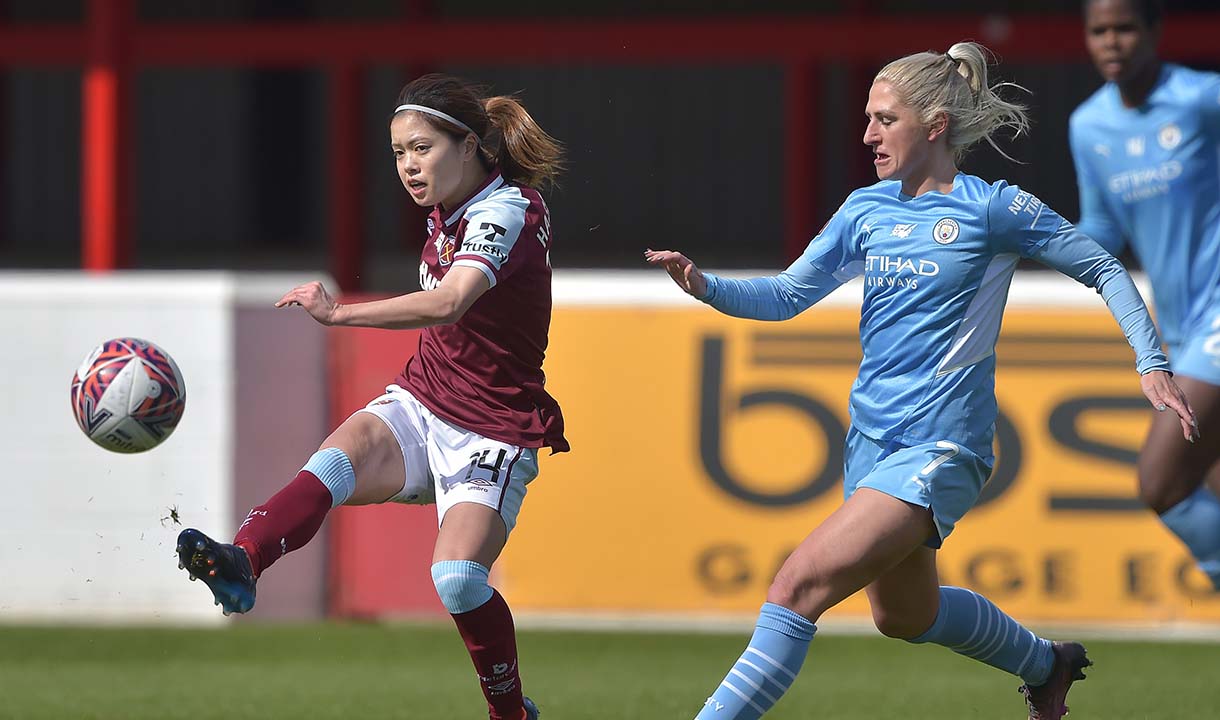 West Ham United fell to a 2-0 defeat at home to Manchester City in the Barclays FA Women’s Super League match.

A resolute performance from the Irons was not enough to contain Gareth Taylor’s City, who found the net in either half courtesy of Georgia Stanway and Khadija Shaw.

The home team were a threat to City’s backline but were unable to make good chances count as Adriana Leon, Lucy Parker and Claudia Walker all missed opportunities to bring the Irons onto the score-sheet and back into the fixture.

Played in glorious, early Spring sunshine in east London, the Hammers marked a historic achievement ahead of kick-off as captain Gilly Flaherty headed into her 100th competitive appearance in Claret and Blue.

The Irons were up against a City side who had found form in recent weeks, and goalkeeper Mackenzie Arnold was called into action in the first five minutes; the Australian making a superb stop to deny Khadija Shaw from close range.

City’s early pressure paid off inside eight minutes as the away side capitalised on West Ham losing possession on the left flank. The Citizens reclaimed the ball and a low cross was swept into the far corner by Georgia Stanway.

The goal initially seemed to suggest that City’s attacking prowess would prove too much for West Ham’s defence but the back-three held firm, containing the away team’s threat.

Kate Longhurst played in a cross for Adriana Leon to attack not long after City’s opener and Yui Hasegawa, who scored a brilliant goal in the reverse leg, looked to be the Irons’ main threat, playing in a ball that Leon narrowly sent wide.

The two attackers combined again with some superb, fluid play as the first half ticked on, leading to Lucy Parker’s opportunity to level at the far post. The effort could not be steered on target, leaving City with a goal advantage at the interval.

Head coach Olli Harder made an attacking change at half-time, with the introduction of Claudia Walker, and the striker came close to scoring with her first touch; a headed effort which went narrowly over the bar.

The home side showed their tenacity as we chased a leveller and found the back of the net on 56 minutes as Walker latched onto a Parker through-ball. The forward slid the effort under Ellie Roebuck, only for our No9 to be ruled offside.

Arnold was again called into action on the hour mark, excellently keeping out a Caroline Weir strike, but could little to stop Shaw’s header from the resulting corner, which doubled City’s advantage.

The Hammers continued to press and Leon will perhaps regret not taking on a shot when one-on-one with Roebuck on the right, choosing instead to try and cut back for Walker only for her pass to be intercepted.

While the Irons found good space in the attacking third, Harder’s side were unable to find a way back into the fixture, with the points leaving with the away side.