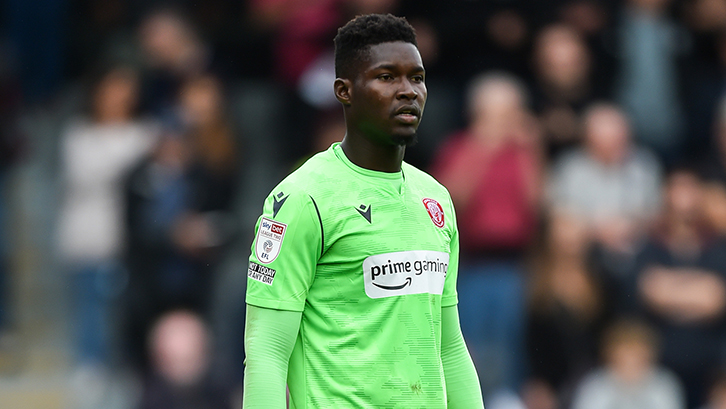 Goalkeeper Joseph Anang helped Stevenage to end their recent losing run with an important clean sheet this weekend, as one of three West Ham United loanees to feature for their adopted clubs.

After an impressive start to life at the Boro, during which he kept five clean sheets in his first eight appearances, Stevenage’s form has dipped of late, with Alex Revell’s team winless in their last nine games in all competitions.

A difficult 4-0 defeat at home to League Two leaders Forest Green Rovers preceded the Boro’s trip to high-flying Harrogate Town on Saturday, but Anang put in an impressive display to help his team to an important point – and clean sheet – on the road.

The 21-year-old produced particularly impressive stops from Harrogate top scorer Luke Armstrong – a stinging shot from 15 yards – and a late Harrogate free-kick which threatened to creep inside his far corner, only for Anang to save well.

And indeed it was Stevenage who came closest to winning the three points when Brad Barry had a header cleared off the line and Jamie Reid hit the inside of Harrogate’s post.

Nevertheless, a form book-defying point and shut-out for Anang and his teammates sees them remain in 21st place in League Two, two points above the relegation zone.

Elsewhere, in the Championship, Mipo Odubeko played the final seven minutes of Huddersfield Town’s 1-0 loss at Swansea City on Saturday, a second consecutive defeat seeing the Terriers drop out of the play-off places.

The Republic of Ireland youth international will continue the search for his first Championship goal when Huddersfield host Blackburn Rovers on Tuesday.

Conor Coventry was also a late substitute for Peterborough United, playing the final 25 minutes after a blitz of goals early in the second half saw promotion-chasing Coventry City seal a 3-0 win.

The fixture list is not kinder for the Posh’s next assignment, however: a home game against Championship leaders Bournemouth is up next on Wednesday evening.

And in League One, Frederik Alves was an unused substitute for Sunderland in the Black Cats’ narrow 1-0 win over Bolton Wanderers on Saturday.