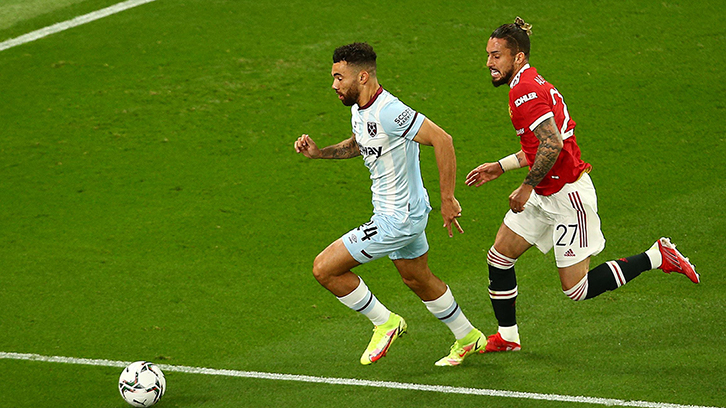 The right-back made his second start of the season in the Carabao Cup third round win over Manchester United at Old Trafford on Wednesday.

In the immediate aftermath of the move which led to Fredericks sprinting past a defender and laying on the assist for Manuel Lanzini’s winning goal, however, the full-back appeared to feel his groin, departing the field eight minutes later to be replaced by Vladimír Coufal.

Speaking at his pre-match press conference ahead of Saturday’s Premier League trip to Leeds United, Moyes confirmed that Fredericks will play no part at Elland Road and will require further assessment in the days to come.

“Ryan’s probably the only player we’ve got any real major concerns over,” the manager explained. “He felt his groin and he’s had an injury prior to it before, so he’s being assessed at the moment.

“He won’t be fit for this game [against Leeds] but we’re hoping it’s not too serious. We’ll know more after the results of the tests, probably at the start of next week.

“We’re very fortunate that we’ve got a couple of other right-backs we can play if we get a problem there, but with the amount of games we’ve got in the schedule, we want them all to be ready to play, so I’m hoping that they all can do that.

“I’m not sure how bad Ryan’s is – I’m hoping that it’s something that’s quite short and quick [to recover from] – but again, we can only wait and see what the assessment comes back with.”

Elsewhere, however, Moyes was happy to report a clean bill of health, having made ten changes to his team between the two fixtures – home and away – against Manchester United in the Premier League and Carabao Cup respectively.

“We said in the main we’ve got a fully-fit squad of players, so hopefully they’ll all be ready to go again,” he confirmed.