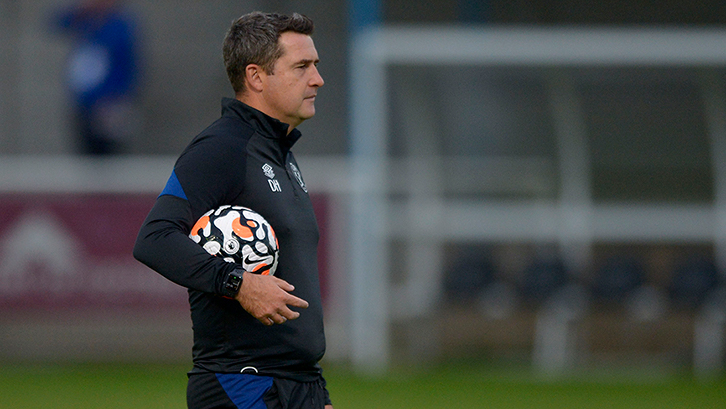 An Ajibola Alese goal on the stroke of half-time – the defender tapping home after Jamal Baptiste’s header from a corner had been tipped onto the crossbar – proved the difference between the two teams in a closely-fought encounter.

But against a talented Palace team, West Ham’s goal rarely came under any true threat, and the hosts were actually the closer team to scoring the second goal of the evening, U23s debutant Sonny Perkins striking the crossbar late on with a blistering effort.

After a difficult defeat to Derby County U23s on Monday night, Halajko took real pride in how his players acquitted themselves at Rush Green Stadium just four days later.

“It was a great response,” he told whufc.com. “I thought we were excellent throughout.

“I thought we controlled the game really. From minute one to minute 90 it was a really good performance, and we’re really happy that individually, we all brought ourselves back to the levels that we know we can get to.

“To keep our first clean sheet of the season is probably the most pleasing thing. It’s the hardest thing to do in football, keeping a clean sheet, and it took all of them squeezing everything out of themselves to get it in a really good, composed, comfortable performance from us today.

“We knew it was going to be a tight game and a tough one. Palace are a hard team to play against – they always are at any age group – so we knew we had to bring our top performances and I thought we certainly did that, in the first half especially – I thought we deserved to go in at half-time maybe more than one up.

“The second half was a little bit more even, but that was when we defended maybe a little bit better and got the clean sheet we deserved.”

Once again instrumental at the back – and this time influential offensively too – captain and goalscorer Alese was a towering presence on the U23s’ way to claiming that clean sheet.

“He was fantastic tonight,” Halajko confirmed. “He scored the goal, but he scores a lot of goals in training… he does get around in the little small-sided games, where it’s tight, and nick goals here and there, so it doesn’t surprise me to see him pop up on the scoresheet.

“I think his defending was even more impressive, and with his leadership skills, I thought he was outstanding.”

Alese’s strike, stemming from a corner kick, was the young Hammers’ fourth set-piece goal in the last month.

“The lads have worked on our set-pieces for sure, and there are a few bits we’ve changed,” Halajko noted.

“A lot of credit has to go to Andy Godbold, who’s our Head of Academy Analysis and who puts in a lot of hours to research how we might to exploit what other teams do on their set-plays, and Head of Academy Goalkeeping Billy Lepine, who takes a lead on our set plays also, but the main credit’s got to go to the players.

“They’ve really improved there this season and that’s showing on the pitch.”

The night was also one to remember for 17-year-old Sonny Perkins, the youth team player who – having made his development squad debut at Portman Road last week and scored his first development squad goal against Derby – went on to make his full U23s debut in Friday’s 1-0 win over Crystal Palace at Rush Green.

“I think that shows a few things,” Halajko explained. “I think it shows the depth we’ve got at the Academy.

“We had two U18s on the pitch and there aren’t many teams in our league who play with two U18s on the pitch. Those U18s we’ve got on the pitch don’t look out of place whatsoever; I thought Sonny was brilliant tonight. It was a really mature performance, really hard-working, technically good, and he was unlucky not to get his goal.

“I think it also shows the pathway at this Club: if you’re good enough and you’re ready, you’ll get into the next age group, and I think that’s something that’s really good about this Academy.”