Stuart Pearce: We couldn’t have asked for any more from our players

West Ham United first-team coach Stuart Pearce was delighted with how his players left everything out on the pitch in their 1-0 win over Manchester United on Wednesday.

The Irons clinched a first victory at Old Trafford since May 2007 thanks to Manuel Lanzini’s early goal, but were equally superb in their defensive efforts as they mostly restricted their hosts to efforts from range.

The result saw the Hammers advance to the Carabao Cup fourth round – in which they will face Manchester City at London Stadium next month – at the expense of an opponent who had defeated them in the Premier League three days prior.

Pearce was therefore delighted that the West Ham United players – buoyed on by strong Claret and Blue support in Manchester – could celebrate a hard-fought, but well-earned, win.

We certainly couldn’t have asked for any more from our players.

We were really disappointed we didn’t get something at the weekend – we felt we played well enough to at least get a point – so maybe we had something to prove from the game.

The fans were magnificent at the weekend, as they were a week prior to that at Southampton, so we’ve really got a unified Club at the moment from the terraces right down to the pitch and the character the players showed.

I think we were worth our victory today and it could have been by more with a couple of chances at the back end of the game.

It was a fast start for us.

Ryan Fredericks has done fantastically well for us [for the goal]. He burst past the opposition and laid one on a plate, and Manu was in there to tuck it away nicely.

We had a couple of other chances as well – I think Jarrod [Bowen] had a good opportunity as well – and I think once we start burying some of these chances, maybe the games might be a touch easier than probably they were.

Our hearts were in our mouths on occasion, but the character of the players has been magnificent this evening.

All of us at West Ham are rightly proud of the result and how well they’ve done, and the manager will refocus again for Saturday with a really tough game at Leeds. 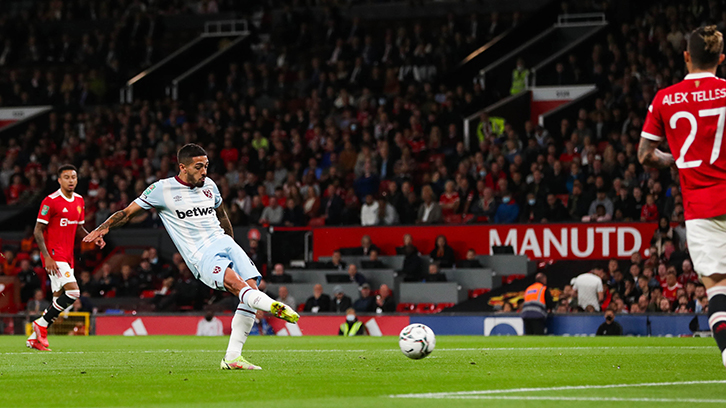 Manchester United had a lot of pressure in and around our third.

When you look at the talent and real estate they’ve got on the pitch at the end of the game, with Bruno Fernandes and Mason Greenwood coming on...

We were under a lot of pressure but if I’m going to name three players, Alphonse Areola did brilliantly in goal. A clean sheet at Old Trafford in his first game – he can be rightly proud of that.

I thought our two central defenders were magnificent, with Issa [Diop] and Craig [Dawson] growing in stature as the game went on.

There is a lot more depth we’ve got within the squad now.

We’ve managed to get that at this moment in time and competition for places is crucial at every Football Club.

The supporters rightly enjoyed that result.

They travelled a long way up [to Manchester] and in midweek as well. They should be very proud of their team like we are proud of them.

I remember coming here many, many years ago and Paolo di Canio scored in a 1-0 victory on that occasion too!

We’re really pleased. It’s fantastic for the supporters to come up and see us win on the road and hopefully somewhere down the line it makes up a little bit for the weekend.