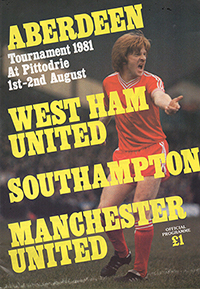 At the end of the 1980/81 season, West Ham were promoted as champions after three seasons in the Second Division (no Premier League or Championship back then!).

In pre-season they were invited to participate in a four-team tournament to be held at Pittodrie, Aberdeen, who were then managed by Alex Ferguson.

Manchester United were one of the other invited Clubs, but as they and the Hammers lost their opening games, they met in a battle for the wooden spoon and a £5,000 bonus. A single goal from Hammer David Cross would be sufficient to take the prize and avoid fourth place.

The first league meeting of the 1981/82 season was scheduled to take place at Old Trafford on Saturday 12 December but, in the event, snow caused the match, and a host of others around the country, to be postponed.

A programme was printed for this game, and this was used for the rescheduled meeting and a small single page insert was added, which included the expected line-ups, an up-to-date table and a list of the Red Devils' remaining fixtures.

The programme issued was priced at 25p and consisted of 24 glossy pages. Unlike the productions of today there were very few adverts carried; the match sponsors Cold Shield Windows had a full-page advert, as did United's kit sponsors Adidas and the Daily Mirror. West Ham were afforded a two-page spread of welcome which included a couple of player action shots and short pen pictures of the likely team. 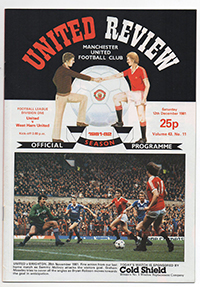 programme featured a number of pictures from the game. Interestingly, the prequel to this was the first ever women's game to be played at Old Trafford, with the Supporters Club Ladies playing a Manchester Select XI.

When the match was played on the rearranged date of 27 January, the visiting side had a couple of new faces who had arrived since the original date: Belgian international Francois van der Elst was playing his third game since a £400,000 transfer from the New York Cosmos.

He was well-known to Hammers fans as he had scored two goals in a 4-2 defeat of West Ham playing for Anderlecht in the 1976 European Cup Winners' Cup at the Heysel Stadium in Brussels.

Also appearing was Scottish Under-23 international Neil Orr, who was making his debut after a recent transfer from Greenock Morton. Orr would go on to play in every match until the end of the season, while both players would go on to make significant contributions over the following few campaigns.

Over 41,000 attended the Old Trafford fixture and reports suggested that Phil Parkes in the visiting goal was at his very best and that the home forwards were "in the mood"! In the end, the result rather flattered the visitors as they only conceded one goal, this being scored in the 73rd minute by future West Ham manager Lou Macari. 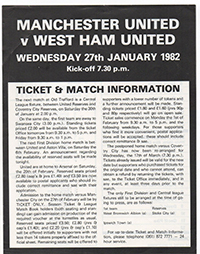 This win took the Manchester club to the top of the table and increased West Ham's nervousness as it was the fifth league game in a row without a win, gaining only one point in the process. A win in the following game helped alleviate the pressure.

The return fixture was scheduled for Saturday 8 May and the Hammers produced their then-standard 20-page compact issue with a colour cover but black and white throughout inside.

The photo on the back was usually of a current player but for this issue it was of youth team manager Tony Carr. Tony had himself come through the youth ranks and was a regular scoring forward, but unfortunately he never made it into the first team.

He was relatively new in the role but he continued in his development role for over 30 years and was at the helm when players such as Paul Ince, Rio Ferdinand, Michael Carrick and Joe Cole came through the Academy, to name just a few.

The programme was sponsored by Berger Paints, who had a full-page advert, while a smaller advert was included for Hammertons Cars of Ilford who were the match ball sponsors. There is no other advertising.

It is rather surprising looking back at the dearth of adverts in West Ham matchday programmes, from the mid 1920s until the early 1970s, the official programme carried no advertisements at all, unlike many other clubs' issues which were heavy in adverts. 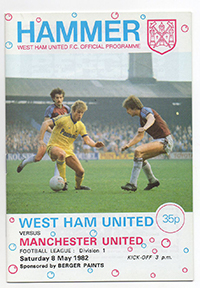 Printers Helliar and Sons normally made up home programme sets to be available at the end of each season and there were 200 sets available which included all first-team games, reserve matches and youth cups, plus a very handy end of season summary for £9.50 including postage to GB.

Admission prices for the 1982/83 season were published; the most expensive seating season ticket was priced at £110, whilst standing on the North and South banks would cost £2.20 per match for adults and £1 for children under 13.

The West Ham team for the game included two players fresh from the Academy of Football: defenders Everald La Ronde and George Cowie appeared in a number of the later games of the season, but sadly La Ronde's seven appearances were not subsequently added to and Cowie only added two more to his six.

A total of 26,337 fans were on hand to see David Cross net for the Hammers in a 1-1 draw. Manchester United ended the season in third place, whilst the Hammers were in a creditable ninth position in their first season back in the top flight.

At youth level West Ham had a very productive season, winning the Southern Floodlit Cup and the South East Counties Senior and Junior Cups, whilst in the leagues, the Seniors were runners up and the Juniors third.