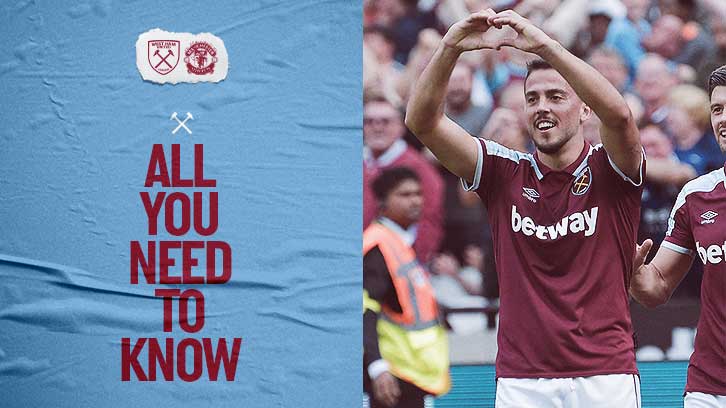 West Ham United return to Premier League action on Sunday afternoon when they host Manchester United in their third home game of the season.

Following Thursday’s 2-0 victory over Dinamo Zagreb in the UEFA Europa League, the Hammers are still unbeaten at the start of the 2021/22 season, having taken eight points from their opening four league games, and begun their European campaign in perfect style on the road in Croatia.

Now, with their focus back on the domestic action, David Moyes’ men are preparing for the first of two meetings with the Red Devils in the space of four days.

Following Sunday’s league clash in east London, the Hammers will head to Old Trafford for a Carabao Cup third round tie.

All eyes are on the league game first though, with West Ham knowing they could overtake current leaders Manchester United in the early table with victory in east London.

Here’s everything you need to know about the fixture.

Tickets have sold out for this eagerly-anticipated game at London Stadium, but that doesn’t mean you have to miss out.

Seats become available as Season Ticket Holders who cannot attend relist on the Ticket Exchange – and you can check out the availability – or relist – by clicking here.

Kick-off on Sunday is at 2pm, with the tie being broadcast live on television by Sky Sports in the UK. Please click here for TV coverage in your territory if you live outside the UK. 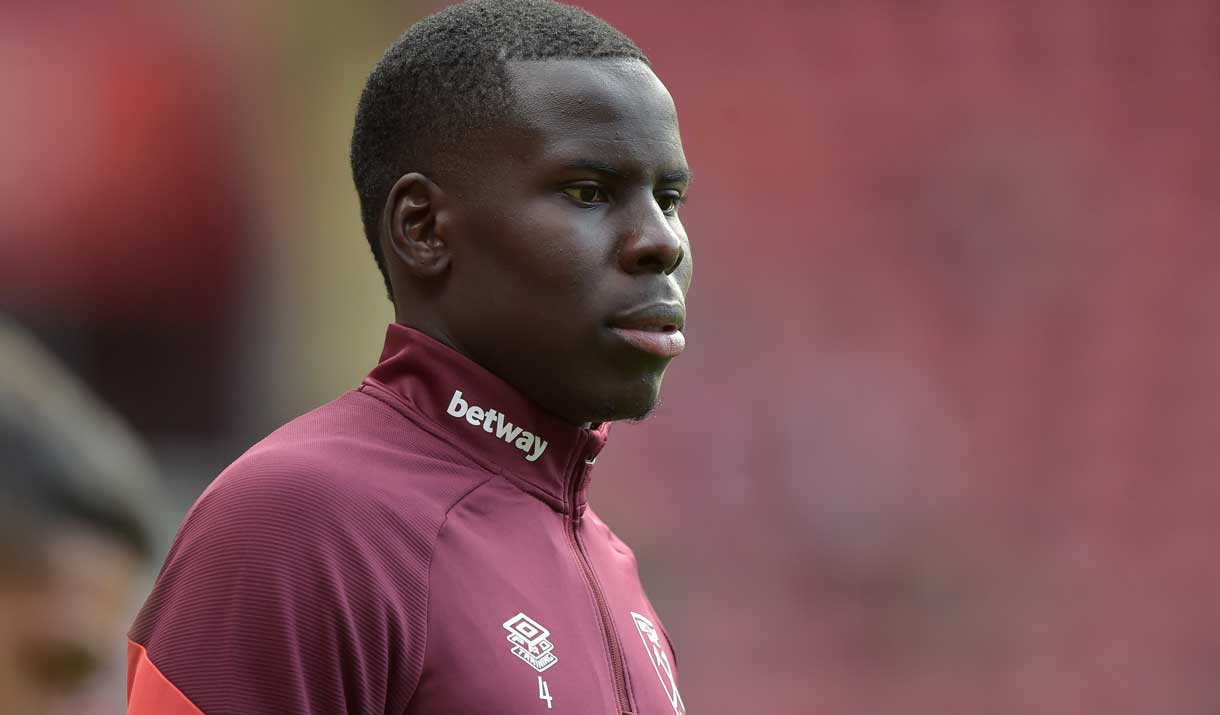 The likes of Angelo Ogbonna, Craig Dawson, Vladimír Coufal, Jarrod Bowen and Saïd Benrahma will all hope to return to the side, but manager Moyes does have some nice selection dilemmas.

However, Michail Antonio will be absent due to suspension after he was sent off for collecting two bookings at Southampton last weekend. The No9 will serve a one-match ban.

Manchester United have no new injury concerns, and Edinson Cavani is set to resume training next week.

Midfielder Scott McTominay could feature too after returning from groin surgery.

In case you had not heard or read about it, Cristiano Ronaldo has returned to Manchester United…

Twelve years after leaving Old Trafford for Spanish club Real Madrid, the Portugal forward re-joined the Red Devils from Italian side Juventus at the end of August, reportedly turning down a move to Manchester City in favour of a move back to M16.

Instead, the visitors’ new No7 is arguably as good as ever, and celebrated his return to Manchester United by becoming the highest scoring international in men’s football history when he netted two late goals for his country in a FIFA World Cup qualifying tie with the Republic of Ireland.

It was yet another memorable moment in a career full of memorable moments, many of which the Madeira-born star enjoyed in the 292 appearances he made for Sunday’s opponents between 2003-09. 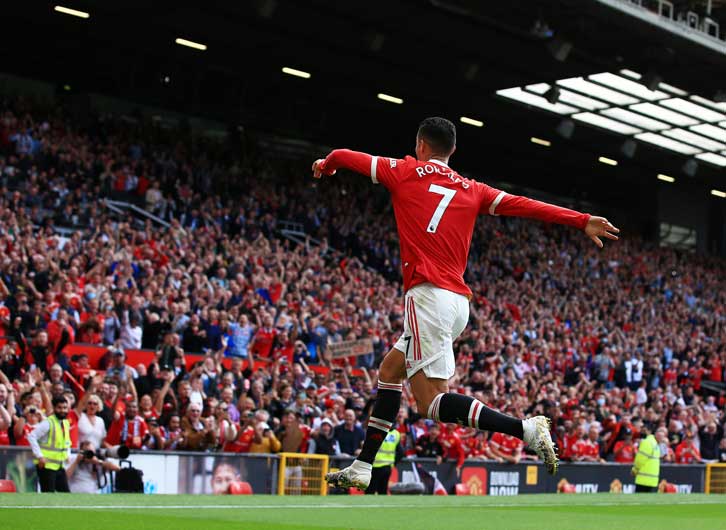 During his first spell at Old Trafford, Ronaldo won three Premier League titles, an FA Cup, two League Cups and, in 2008, the UEFA Champions League and FIFA Club World Cup – all by the age of 24.

In the 12 years since he departed, Ronaldo has won 22 more trophies with club and country, including four more Champions League titles with Real Madrid and UEFA Euro 2016 and the 2019 UEFA Nations League with Portugal.

In those same 12 years, Manchester United have won just ten trophies, none of which were the Champions League, while the Red Devils have not won the Premier League title since the retirement of Sir Alex Ferguson – the legendary manager who brought Ronaldo to the club initially and reportedly played a big role in his recent return.

One player who played alongside under Ferguson, Ole Gunnar Solskjær, is now in the manager’s seat and the Norwegian will hope Ronaldo’s return inspires Manchester United to the first trophy of his reign, which began in December 2018.

With England attacker Jadon Sancho and France defender Raphaël Varane adding further quality to a squad that already includes a host of top-class international stars, there is renewed optimism and excitement around Manchester United and what they can achieve this season.

A 5-1 opening-day win over historic rivals Leeds United also helped Solskjær’s cause, only for a frustrating 1-1 draw at Southampton to follow.

Victory at Wolverhampton Wanderers and home to Newcastle United either side of the international break – and Ronaldo’s return – have seemingly got things back on track in the Premier League.

Meanwhile, the Red Devils will expect to negotiate a UEFA Champions League group containing Italians Atalanta, their conquerors in last season’s UEFA Europa League final Villarreal and Swiss side Young Boys, despite their defeat to the latter on Tuesday.

With Ronaldo back in red, for Manchester United, suddenly it again appears anything is possible.

West Ham United and Manchester United meet in the Premier League for the 51st time on Sunday afternoon.

The visitors have had the best of things down the years, winning 30 of the 50 previous meetings, while the Hammers have won seven, with 13 draws.

Of those seven wins, five have come at home – with three arriving in the last six seasons.  After defeating the Red Devils 3-2 in the final Boleyn Ground game in May 2016, the Hammers recorded back-to-back home victories against Sunday’s opponents in September 2018 and September 2019, by 3-1 and 2-0 scorelines respectively.

David Moyes has faced Manchester United 31 times during his managerial career, 24 of them with Everton, two with Sunderland and five with West Ham United, winning four, drawing seven and losing 20.

At Sunday's fixture, the Club is raising awareness for the West Ham United Foundation, their charitable organisation which delivers social support programmes and aids good causes.

Based in Beckton, Newham, and spanning east London, Essex and international sites, the Foundation harnesses the energy and impact of football to help and inspire the community. Having been disproportionately impacted by the pandemic, the areas surrounding the Foundation have heightened levels of need and in the past 18-months the charity has been doing everything it can to continue to make a positive difference.

Whilst remaining engaged with people across their 30+ programmes which span health, community, football development, learning and employability, the award-winning Foundation has also been assisting frontline services and pivoting their operations so they can do even more. This has included working more closely with local NHS Trusts, offering essential items to those who may otherwise go without and establishing new partnerships and initiatives.

Despite restrictions lifting, the Foundation is still dealing with the many issues and inequalities brought to the surface during this period and will do so for years to come. As such, their multi-layered approach and objectives to respond to local need, unite our community, and provide an environment for all to thrive, are more important than ever.

This weekend, in partnership with Skye Cloud, the Foundation is officially launching the ‘Give IT’ appeal which calls on people from the local area to drop off unwanted functioning IT devices at West Ham United Stores from 20 September - except for the London Stadium Store on home matchdays - so they can be recycled and redistributed to children and young people in need across the community.

There are up to 1.8million students in the UK who do not have access to a laptop, desktop or tablet at home. With schools and colleges working to help pupils catch up and re-engage with their studies following the impact of the pandemic, they need to be able to access these devices in the classroom and at home. This is presenting further problems with some students, who are unable to afford a device and therefore unable to learn effectively, dropping behind in their studies through no fault of their own.

Together, the Foundation and Skye Cloud will be collecting donated items, professionally wiping them (in agreement with GDPR regulations) and delivering them to the Foundation’s network of schools and colleges across east London and Essex.

Devices need to be functioning, less than five years old, include the charging accessories and entry password details.

We hope you will join us in spreading awareness about their work and celebrating their efforts. Anybody interested in finding out more or getting involved can contact them by email on [email protected], visit their website, or follow them on social media @WHUFoundation.

The 50-year-old has referred West Ham United on 59 occasions, including once already this season in the 4-2 victory at Newcastle United.

Last term his Hammers appointments included the 4-0 home Premier League victory over Wolverhampton Wanderers last September and the 3-0 final-day win over Southampton at London Stadium in May.