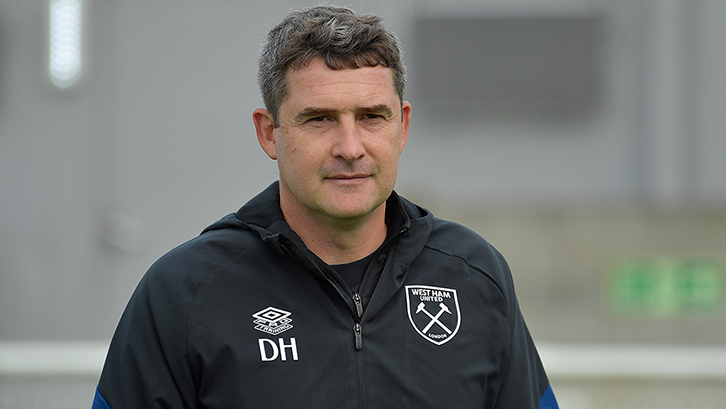 West Ham United U23s lead coach Dmitri Halajko was proud of the commitment and application of his players in Saturday’s 2-2 draw at Thorp Arch Training Ground.

The end scoreline marked a fair reflection on an entertaining encounter in West Yorkshire in Halajko’s eyes, after two sides - whose respective high pressing styles have yielded success in recent seasons - gave it their all and ultimately cancelled each other out.

West Ham started the brighter of the two sides and struck the base of the post through Kamarai Swyer in the first half, but fell behind after 29 minutes when Max Dean stooped to head a low cross past 'keeper Krisztian Hegyi.

The Hammers came out reinvigorated for the second half and hit two goals in five minutes, both from set-pieces – the first an excellent Harrison Ashby free-kick from 25 yards, the latter a Jamal Baptiste header from Ashby’s corner – to turn things around.

But Leeds ultimately earned a point when Sam Greenwood converted a late penalty after Joe Gelhardt was brought down in the box, leading to a point which sees both teams end their fourth game with seven in total.

“Overall, I think it’s probably just about a fair result,” Halajko told whufc.com.  “I think we should have scored in the first 30 minutes when we were really on top, and that would have changed the game. Instead, we had to chase the game.

“To come in at 1-0 down at half-time I thought was against the run of play; in the first half-an-hour we were by far the better team and probably had three or four chances we should have done better with.

“We started the second half really well and got what we deserved. We just got caught out a little bit in the end, but all in all I think it was a top game of football: really high intensity, end-to-end, two teams going for the win, so I think the lads will have got a lot out of it in terms of their development.”

I thought both teams really went for it today, and that’s always going to push us harder and push us to develop more

The commitment of both teams made for an entertaining spectacle at the top end of the Premier League 2 Division 1 table, and Halajko was pleased to come up against a high-pressing, aggressive style cut from the same cloth as the Hammers’.

He smiled: “We really enjoy it because we like playing football like that also. We like pressing and attacking with a purpose, so it’s a good style for us to play against. We like that style of football and appreciate it.

“I thought both teams really went for it today, and that’s always going to push us harder and push us to develop more.”

Yet West Ham's outstanding defensive performances across the board also caught the eye at Thorp Arch Training Ground, particularly from the young Hammers' returning captain.

Halajko observed: “I thought Aji Alese was phenomenal today. He’d just come back from the concussion he suffered in the Chelsea game and he was absolutely superb.

“He had a really good game and was certainly one standout performer, but he wasn’t the only one. Harrison also got his goal and an assist from the set-pieces, and had the beating of his man down the right wing the whole game. We had some really good individual performances.

“Krisztian [Hegyi] made one unbelievable save – top-drawer, Premier League standard – and that’s what we want: we want more performances like that and more moments like that. It was nice to see some today.”

Halajko will be hoping his development squad continue to push themselves hard when they travel to League One team Ipswich Town's Portman Road in the Papa John’s Trophy group stages on Tuesday night.