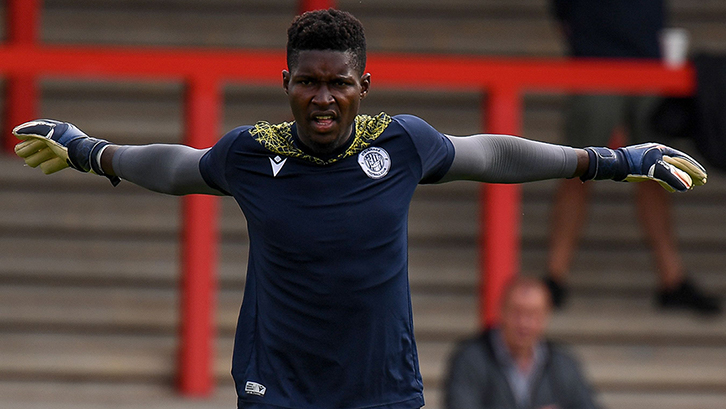 West Ham United loanee Joseph Anang recovered from injury to start for Stevenage in their 1-1 draw at home to Swindon Town on Saturday afternoon.

The 21-year-old goalkeeper, who made an impressive start to life at the Lamex Stadium with five clean sheets in his first eight appearances and penalty shootout-winning heroics against Luton Town in the EFL Cup, had missed the Boro’s last two games with a minor injury.

But the charismatic Anang recuperated in time for Saturday’s League Two game against the Robins – and was only denied another clean sheet by a Jack Payne penalty deep into stoppage time.

The ‘stopper had earlier adjusted his dive well to tip Payne’s looping first-half effort – a shot taken from 25 yards, but deflected by an outstretched Stevenage leg – onto his post and wide of the goal.

That had been the closest either team had gone to opening the scoring in a largely lifeless first half, but the match ignited when a miscommunication at the back for Swindon led to Stevenage full-back Ben Coker cutting inside and bending the ball into the top corner from a tight angle on 54 minutes.

Five minutes later, Swindon attempted to respond through Ben Gladwin’s rising drive from 30 yards. A comfortable enough save for Anang saw the goalkeeper initially tip the ball over the bar, before jumping up again to cover his crossbar and make sure it dipped onto the roof of the net.

Elliot List ought to have sealed the game for Stevenage after being played through by Luke Norris, but fired over, and Terence Vancooten then saw his header cleared off the line as the home team pushed for a second.

But in the dying embers a deep Swindon cross was headed back into the area and Scott Cuthbert’s lunging tackle was judged to have got man rather than ball, the referee awarding Swindon a penalty in the fifth minute of injury time.

This time, there was to be no repeat of Anang’s penalty heroics as the goalkeeper went low to his left, Payne instead opting to blast the ball high and central and claim his team a point.

After a bright start, 12th-placed Stevenage are now six games without a win in all competitions, and will hope to return to the habit when they travel to basement team Sutton United on Saturday afternoon in League Two.

Elsewhere, Nathan Holland and Oxford United missed the chance to go top of League One as the U’s slipped to a 3-1 defeat at AFC Wimbledon.

The West Ham winger entered the fray in the 66th minute but, despite appearing to have a clear opportunity on goal soon after, had the ball taken off his toe by a superb challenge from Wimbledon’s Ben Heneghan.

The moment seemed to spur the Dons on and they went on to claim the points with two goals in three minutes, headers from Will Nightingale and Rudoni once more seaing the result in the home side’s favour.

Now seventh in the table, Oxford will hope to pick themselves up for the visit of sixth-placed Wycombe Wanderers on Saturday afternoon.