West Ham United is delighted to announce that promising young defender Emmanuel Longelo has signed a new contract with the Club.

The deal extends Longelo’s stay with his boyhood team to the summer of 2023, with an option to extend for a further year.

The 20-year-old made his first-team debut against Hull City in the Carabao Cup third round in September 2020, playing the closing 21 minutes of the 5-1 victory at London Stadium.

An adventurous and athletic left-back, Longelo has also played the most minutes of any member of the Hammers’ U23s squad this season, making a combined 25 appearances in Premier League 2 and the Papa John’s Trophy while recording five assists in the process.

For Longelo, who grew up in east London and joined the Academy of Football as an U10s player, the new contract marks the culmination of a campaign of real developmental progress – as well as his personal favourite season to date.

It’s a massive achievement for me – not just for me, but my family as well

“It’s a massive achievement for me – not just for me, but my family as well,” he told West Ham TV. “We’ve all put a lot of hard work in for me to get here, so I’m very happy and very proud.

“I was ten when I joined the Club, so I’ve been here eleven years now, and I was just a normal, shy lad. I didn’t really talk too much – I just came in, did my thing and worked my hardest. It’s been a long journey and I’ve come a long way in that time.

“I think this has probably been my best season at West Ham so far. I didn’t expect to make my first-team debut so soon but just through hard work, the opportunity came through to me, and hopefully I took it.

“Five assists is something I wanted to achieve – compared to last season’s total, it’s more – and I didn’t know I’d played that many minutes for the U23s!

“It just shows the amount of hard work I’ve put into this season, and it’s paid off. I’m really glad and really happy.” 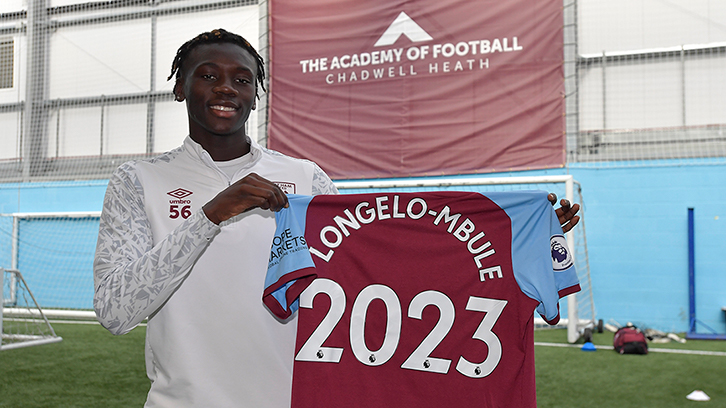 Originally a midfielder, Longelo’s Academy career has already seen his versatile skillset deployed in a number of positions, including as a forward and a left-sided attacker.

In recent seasons, however, the 20-year-old has settled naturally into the role of an offensive-minded full-back, capable of producing rapid bursts forward and threatening crosses with his favoured left foot.

On signing his new deal, Longelo expressed his gratitude towards all the coaches, mentors and friends he has benefitted from during over a decade’s development at the Academy of Football.

“I’ve been going to Boleyn Ground since a young age,” he admitted. “To have made my debut at London Stadium is something I never thought would happen so soon!

“The Academy have shown trust in me and given me time to grow. They’ve trusted in my ability and given me confidence so that every time I’ve stepped out onto the pitch, I’ve felt good. That trust you get from your coaches is the most important thing.

“As a full-back himself, [U23s assistant coach] Steve Potts has been giving me advice on how to work on my body shape, how to get up for the ball – just those little things which are important as well.

“[Academy Manager] Ricky Martin, [U23s lead coach] Dmitri Halajko and Steve have all helped me to always believe in myself, go out there and express myself, and give it my all – my hundred per cent.

“It does really mean a lot to me to extend my contract and my stay at West Ham especially, where I feel like I’m home. I just want to kick on and work hard and put in my all really.”

Academy Manager Martin added: “Manny has continued to progress in the last 12 months.

"He’s done really well in the U23s and had his opportunity to make his first-team debut this season as well. He’s had a good year.

“He’s also found it challenging as well with some little niggles and injuries, and he’s had to overcome that, but Manny has been reactive and resilient to the challenges and fully deserves another two years at this Football Club.

“He now knows that he needs to step on and have that breakthrough – that transition from Academy football into senior football.