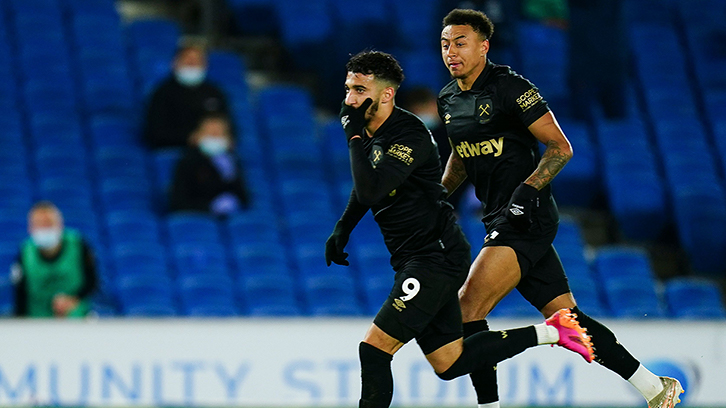 Said Benrahma's first goal for West Ham United saw them claim a point at the Amex Stadium in a lively 1-1 draw with Brighton & Hove Albion.

The Irons' European ambitions looked in peril when a match largely light on clear-cut chances burst into life in the last five minutes, Danny Welbeck bursting clear to chip Lukasz Fabianski and put the home team in front.

But just three minutes later, Algeria international Benrahma - having entered the field of play as a second-half substitute - earned his side an important draw with an exquisite curling finish from the edge of the area.

A draw was the least the Hammers deserved from a match full of huff and puff, but often lacking in terms of the quality of final pass from both sides.

In their final behind-closed-doors fixture before the eagerly-anticipated return of supporters to Premier League grounds, David Moyes’ West Ham team were bolstered by the presence of Declan Rice, out through injury for almost two months prior to Saturday evening’s game.

Wearing the captain’s armband, Rice returned to the side along with Angelo Ogbonna and Jarrod Bowen, while Club skipper Mark Noble was also back from injury and named on the bench.

With a top-four finish still mathematically viable, the Hammers started with greater intent on the south coast, making inroads down the inside channels with moves which saw Pablo Fornals and Jarrod Bowen both flash the ball across the face of goal in quick succession.

After a nervy opening, however, the Seagulls settled, manager Graham Potter's signature style of possession football almost leading to a chipped pass finding Welbeck in on goal – but Craig Dawson put in a well-timed boot to clear.

West Ham, however, were zipping it about in the offensive third with greater purpose, picking up a series of corners inside the opening 20 minutes.

One such set-piece saw Dawson rise highest to meet Jesse Lingard’s delivery, glancing the ball on, but the centre-back’s header lacked the necessary purchase to divert the ball with goalwards.

Michail Antonio was the target of the Irons’ next threatening delivery on the half-hour mark. Lingard’s ball in from deep found the No30 having peeled off his marker but – perhaps unaware of the space he was in – the forward headed back across goal when he seemingly had time to control. The danger was cleared before the offside flag went up regardless.

The game needed a spark, and Fornals came closest to providing it in the closing stages of the first half, producing a sensational first touch to spin past Adam Webster. The skill knocked him off balance, however, and he slipped over as he raced in on goal.

Seconds later, Cresswell’s fizzing pull-back found the Spaniard well-positioned on the penalty spot but, amidst a crowded box, his placed finish deflected away off a defender’s legs.

The Irons were well on top and had a shout for a penalty turned away when Coufal’s cross appeared to bounce up onto Webster’s hand, moments before Tomáš Souček had a stinging effort from 25 yards punched away by Brighton goalkeeper Robert Sanchez.

It was momentum which the Irons carried forwards into the second half, Bowen’s incisive run into the box matched by a threatening low square ball which – somehow – an on-the-stretch Webster and a reactive Sanchez cleared between them.

But as they proved in fleeting moments of the first half, Brighton were capable of posing the away team problems, Alireza Jahanbakhsk’s cross-shot forcing Lukasz Fabianski into a save with his legs – replays subsequently confirming that the winger ran from an offside position.

The aerial route was looking West Ham’s most promising, with another ball in from deep – again from Cresswell – glanced over the top on the charge by Souček.

On the same flank, Jahanbakhsk was beginning to regularly pick up pockets of space and – seconds after Ogbonna had done well to block Leandro Trossard’s effort inside the ‘D’ – the Iranian winger had another mid-height cross-shot turned away by Fabianski’s gloves.

Seconds later, the same attacker had the clearest sight of goal of the game. Having taken a long ball down on his chest, Jahanbakhsk – with Fabianski stranded – curled the ball over the Polish shot-stopper. Much to the Irons' relief, the effort rolled across the face of goal but ultimately spun wide of the far post.

Fornals then had another opportunity to break the deadlock, racing onto a raking long ball by Cresswell but – forced wide while rounding the keeper – his attempted cross was plucked out of the air.

With ten minutes left to play, Coufal checked back onto his left foot and curled in a chest-height cross which found Fornals, but the No18 miscued with an audacious flick when he had more time than he knew.

The Irons persisted and after Lingard's corner kick had evaded Ogbonna in the centre, Benrahma recycled the ball and swung a delightful cross onto the head of Dawson in the six-yard box. This time, the defender's contact was firm - unfortunately, overly so, as his header sailed wide.

It was a miss West Ham looked set to rue two minutes later when Brighton opened the scoring, substitute Percy Tau's incisive pass putting Welbeck clean in on goal - and the forward duly chipped over Fabianski to open the scoring.

But Benrahma was not deterred and just three minutes later, the Algeria international picked up a loose clearance on the edge of the area and curled an exquisite finish into the top corner, high beyond Sanchez - his inaugural strike for the Irons sealing a point which was the least his team deserved.