Olli Harder: The team worked hard for one another

Olli Harder was pleased with his side's work-rate and application as West Ham United Women were narrowly defeated by Manchester City at Victoria Road.

A 75th minute strike from Ellen White was enough for the Citizens on Sunday afternoon, who were denied twice from the penalty spot thanks to superb saves from Hammers goalkeeper, Mackenzie Arnold.

The east Londoners were a threat on the counter attack, Hawa Cissoko going closest after a mazy run forward, but her acrobatic effort landed narrowly wide of the post.

And the New Zealander reflected on his team’s performance at the full-time whistle as their Barclays FA Womens Super League safety was confirmed.

“We lacked a little bit of quality in certain moments, giving the goal away the way that we did, so there are moments we can do better with, but we can certainly build on the character that we’ve shown in the past month going into next season.

“They needed to come here and score some goals, but we were able to hold them to only one, so I’m proud of the girls for their resolute defending, it’s a challenge for us to go up there next week, but to have secured our status in the league, finishing ninth is a big positive for us.”

There’s progress being made here, and I think that is evident to see. We now have a transfer window ahead of us and a chance for players to recharge their batteries. It’s a chance for me to continue to get my own ideas across and build a team that will move the club forward.

Manchester City needed title rivals Chelsea to slip up against Reading to have any hope of securing the title, but it was the Citizens who struggled to break down a stubborn West Ham United defence.

Mackenze Arnold won’t forget the game in a hurry, making two fantastic penalty saves in each half to deny American internationals Sam Mewis and Rose Lavelle. Harder was quick to praise both of his goalkeepers, who have each played a part during the course of the campaign. 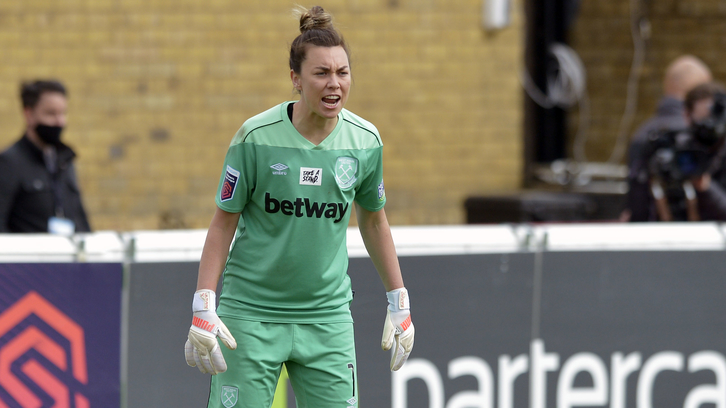 “Mackenzie was superb today, I’m very spoilt in the fact that I have two fantastic goalkeepers. Courtney [Brosnan] came in when Macca was injured and did brilliantly and then Macca has come back in and shown her class in the last couple of matches. She’s a quality goalkeeper, so I’m pleased for her that she was able to save both of those spot kicks.”

It's been a tough season for the Hammers, who have flirted with relegation for much of the season – however, Harder said that his players achieved their status in the division by showing fearlessness – and is looking forward to the challenge of building a squad for next season.

“The big thing for us was negating that fear of failure, the players had it in them and there was enough quality for us to stay in the league. I think where we’ve ended up is close to a fair representation as to where we are as a squad, between 7th-9th is fair considering how thin our squad is.

“But it’s a case of avoiding that fear, and I think you can see in our play that we try to get out and in the face of the opposition, we don’t sit back at the edge of our own box. We have an attitude of having no fear and that has helped us get over the line and stay in the division.

“There’s progress being made here, and I think that is evident to see. We now have a transfer window ahead of us and a chance for players to recharge their batteries. It’s a chance for me to continue to get my own ideas across and build a team that will move the club forward,” he added.

West Ham United travel to the Academy Stadium to face off against Manchester City in the Fifth Round of the Vitality Women’s FA Cup on Sunday 16 May.

Laura Vetterlein: We want to finish with a win
Last Match
Sunday 23 May 16:00
London Stadium