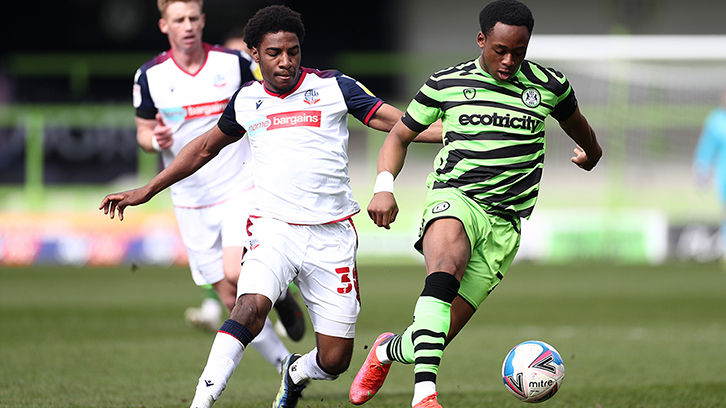 Three Academy of Football products were able to celebrate victories on loan in League Two this weekend.

The victory – Bolton’s tenth in their last eleven games – arrived courtesy of an Eoin Doyle strike five minutes before half-time, with the Irish forward getting onto the end of Nathan Delfouneso’s ball in from the right before applying an emphatic finish.

Afolayan was making his 12th appearance of the season for the Trotters, and was once again deployed by Bolton manager Ian Evatt on the left-hand side of a three-pronged attack, where he could use his pace and power to good effect.

The 24-year-old has yet to experience defeat since moving to the North West at the end of January, and played another 80 minutes on Saturday before coming off to be replaced by Arthur Gnahoua.

Alese was among the substitutes for the U’s last-gasp victory at Carlisle United on Saturday, with goals in stoppage time at the end of both halves – in the first from Paul Mullin, in the second from Adam May – book-ending a Carlisle equaliser from Lewis Alessandra.

Cambridge are top of League Two as a result of the win, two points ahead of second-placed Cheltenham, albeit having played a game more.

In with an outside chance of making the play-offs are Olatunji Akinola and Leyton Orient, whose 2-1 win over Oldham Athletic on Saturday – a third win in the space of seven days – boosts them up to ninth, four points outside the play-off spots.

Coming off the back of a lengthy winless run, it would appear that the O’s – under current interim manager Jobi McAnuff – have rediscovered their form at just the right moment of the season.

Akinola, who played at right-back and kept clean sheets in the 1-0 wins over Newport and Carlisle last week, was once again played there against Oldham.

The O’s took the lead inside eight minutes when Conor Wilkinson took full advantage of a loose back-pass, and that advantage was doubled shortly before half-time when former Hammers man Dan Kemp rifled in a crisp low shot from outside the area.

Oldham did get a goal back on the hour mark when Alfie McCalmont responded with a low shot from range of his own, but Akinola and his fellow Orient defenders saw out a couple of nervous moments to claim the three points at Breyer Group Stadium.

Leyton Orient’s are next in action on Good Friday, when they travel to relegation-threatened Mansfield Town, hoping to sustain their recent profitable run of form.

Elswehere, in the League of Ireland Premier Division, midfielder Alfie Lewis made his first appearance in a St Patrick’s Athletic matchday squad, but the 21-year-old did not enter the field during a 2-1 home win over Drogheda United.