Kevin Keen: There was a calmness about U18s in Youth Cup win 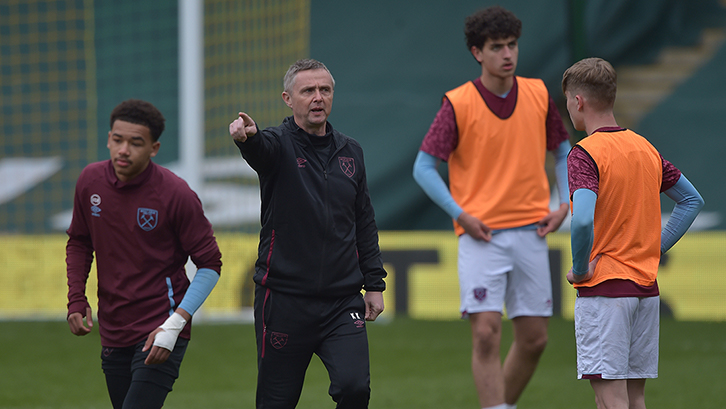 West Ham United U18s lead coach Kevin Keen was delighted by how his players rose to the occasion of an FA Youth Cup tie in their impressive 5-0 win over Norwich City U18s at Carrow Road.

Despite the naturally heightened excitement of the match, the young Hammers were diligent, focused and – crucially – efficient in their work in east Anglia against a talented home outfit.

A first-half brace from Ademipo Odubeko, added to by Jayden Fevrier’s third goal in the competition this season on the stroke of half-time, put West Ham in a commanding position at the interval.

Norwich proceeded to apply heavy pressure at the start of the second half, forcing a particularly fine sprawling stop from Irons’ goalkeeper Krisztian Hegyi, before West Ham took back control, adding further goals via Jamal Baptiste and Kai Corbett.

Following the 5-0 win, Keen spoke of his pride at how his players approached the occasion, believing it to be key sealing a spot in the fifth round of the competition.

“I’m really, really proud of the boys, the way they went about the game and the way they played and managed the game,” the lead coach told whufc.com.

“Their effort, their enthusiasm, the goals… I wouldn’t say it was perfect, but it was a very, very good away performance against a good team.

“Norwich are a good team, but Krisztian made a couple of good saves that got us our clean sheet, so I’m really pleased for the lads.”

Key to that, Keen admits, was how hard his players worked in the build-up to the game.

The lead coach added: “We feel like we’ve got a good squad of players at U18 level.

“Because lots of them have been playing up with the U23s, it’s been difficult sometimes to get a little bit of team cohesion, but at the same time [Academy Manager] Ricky [Martin] has been fantastic with us.

“This week we’ve really worked hard at it, our planning went well and I felt the lads dealt with the game really well.

“There was a calmness about us today which really pleased me, because sometimes the FA Youth Cup can be a little bit ‘you attack, then we attack’. I thought the way the lads controlled the game was probably the most pleasing thing for me.” 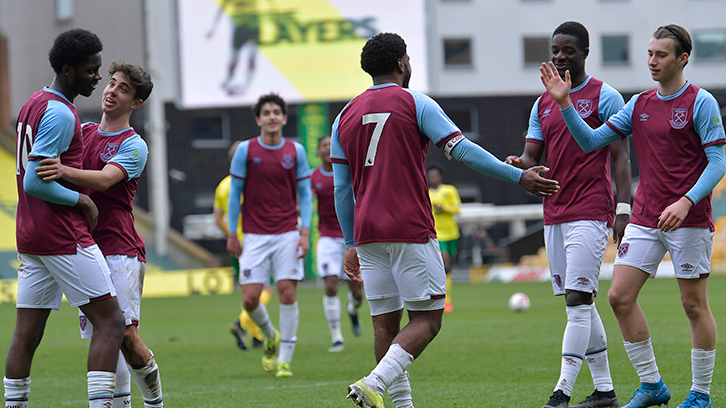 Keen was also full of praise for his forward line for the manner in which they dispatched their chances when they arose – as well as his defenders for keeping a clean sheet against a team who had scored 25 goals in their previous seven games.

“With the front line we had, with Mipo, Kai, Kamarai [Swyer] and Jayden, we’ve got some really good attacking talent there,” he observed.

“I’m grateful to the manager [David Moyes] for letting us have Mipo back in the team for today, and he kicked it off with a couple of good goals.

“At this level, if you’ve got players who can beat people, score goals, play passes like Kamarai’s for the third goal, you’ve always got a chance.

“I’m really excited that that came about, but also delighted with how we set ourselves up. Norwich have got a good front two who score a lot of goals, and I thought our back three were absolutely fantastic today.

“Krisztian Hegyi was fantastic for us in the penalty shoot-out in the third round, and he made an important save to keep the game at 3-0, which made it difficult for them to come back from there.

“Then, once our fourth one went in, [assistant coach] Mark Phillips and I could sit back and relax a little bit, which is unusual for West Ham in the Youth Cup!

“It’s been a little while since we had a Cup run, so I’m really pleased for the lads.”

Looking forward to Friday’s fifth-round draw, Keen has tasked his players with keeping their heads down and – as they did to such great effect on Monday – letting their football do the talking.

He joked: “It would be nice to have a home game next – although I’m not sure that’s true, having had two away wins so far!

“We’re just happy that if we can stay humble and keep working hard, we can give most people in this competition a game.”