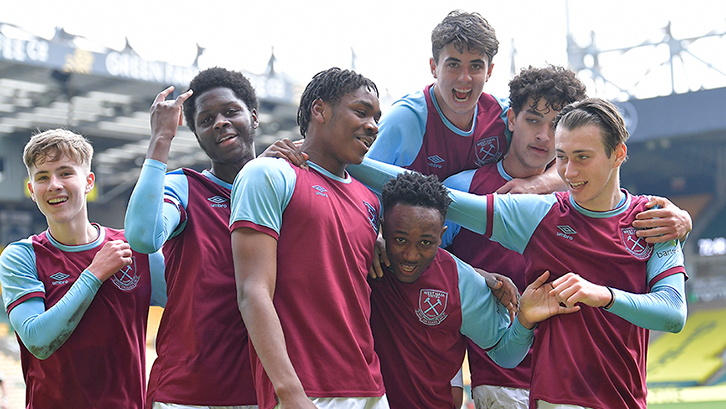 West Ham United U18s produced a first-class display at Carrow Road to book their place in the FA Youth Cup fifth round with an emphatic 5-0 win over Norwich City U18s on Monday afternoon.

Kevin Keen’s youth team can take great pride in an excellent all-round display, being steadfast in their defending, efficient in their attacking – and decisive in the moments that mattered either side of half-time.

After soaking up some early pressure, the Irons took the lead early on when Mipo Odubeko collected Kai Corbett's pass, turned and swept the ball into the bottom corner after ten minutes.

An end-to-end encounter saw chances traded at both ends, but the young Hammers took command before the break when Odubeko tapped in captain Jayden Fevrier’s pinpoint low cross and – on the stroke of half-time – Fevrier capped a fine Kamarai Swyer pass with a powerful finish.

Norwich came out of the traps with renewed vigour, but rigorous defending – including one particularly impressive save by Kristzian Hegyi – kept Norwich at bay, before Jamal Baptiste’s header from a Corbett corner - and a low rocket from the latter - coated gloss to the scoreline.

As a result, West Ham’s youth team can now look forward to their first FA Cup fifth round draw since the 2011/12 season, which is set to take place on Friday. 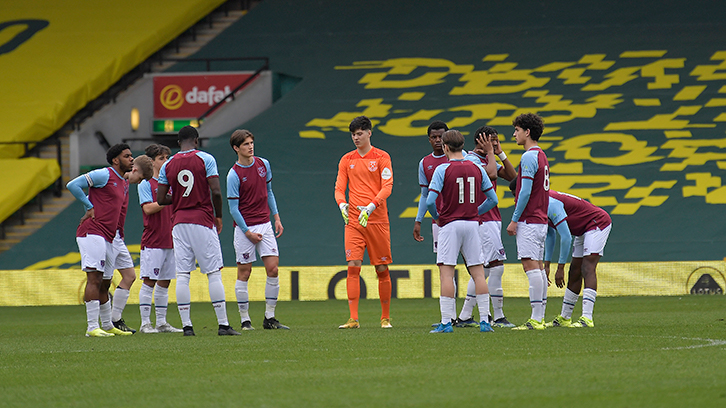 Keen made six changes to the side which started last weekend’s 2-2 draw against Aston Villa U18s at Bodymoor Heath Training Ground, with the likes of Archie Woods, Freddie Potts, Baptiste, Fevrier, Odubeko and Corbett all returning for the U18s.

The home team made a bright start and tested the resolve of the Hammers’ back five, with centre-back trio Potts, Levi Laing and Baptiste all forced to intervene in the early stages as Norwich – through wingers Tony Springett and Jon Rowe in particular – put in a succession of early crosses.

Having ridden out the early storm, Keen’s team showcased their offensive potential with Corbett, Swyer and Fevrier supporting Odubeko – making his third matchday squad appearance of the weekend – in a dynamic-looking attack.

The quartert's combination led to the Hammers’ first chance after five minutes – Fevrier’s low shot a simple enough save for Sam Blair – and, five minutes after that, West Ham’s first goal.

Playing in the No10 role, Swyer found space on the edge of the area and played a neat through-ball for Corbett, whose low pass Odubeko took a touch on to roll across his body before slamming in a low left-footed strike, too hot for Blair to handle.

Odubeko then turned provider, allowing Corbett having a low side-footed shot blocked inside the area, moments before Norwich wasted a clear-cut chance to draw level when Springett’s diving header – six yards out – went wide of the mark.

The Irons' attackers made the Canaries rue that miss ten minutes later when Fevrier showed great desire to win the ball high before rolling the ball across the goalmouth to Odubeko who – from a similar distance to Springett – took his opportunity to blast home. Despite Norwich once again pressing forwards, Fevrier then gave his team a commanding lead with an excellent finish, taking an incisive pass from Swyer into his path, checking back onto his left foot and finishing with aplomb over the sprawling ‘keeper.

The home team were unbowed and came out after the restart with a point to prove, creating a succession of chances which – through a combination of earnest defending and fine goalkeeping by Hegyi – the Hammers survived with clean sheet intact.

Norwich's clearest opportunity came moments after half-time; a well-worked move saw Abu Kamara played clean through on goal, but the striker’s rushed effort bounced off the woodwork and went wide.

Hegyi then was called upon to produce an excellent stop from Rowe, racing from his line and getting his fingertips to a close-range effort, to keep the Hammers in control of the tie.

That save proved a turning point in the half as, with Norwich’s momentum halted, the Irons were able to seize control of the remainder of the contest.

Odubeko twice came close to completing his hat-trick: a snapshot from outside the area struck the base of the post, before only a fine block prevented him from converting Corbett’s intelligent lay-off on the counter-attack.

Yet the sting was well and truly drawn from the game when Corbett’s in-swinging corner was met by Baptiste at the back post for the defender's first U18s goal. 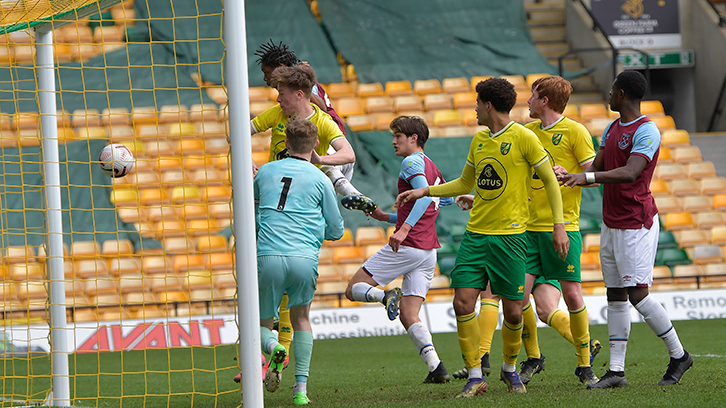 There was still time for Corbett to claim a well-deserved goal of his own in East Anglia, controlling a pass from Odubeko, driving forwards and – after substitute Divin Mubama had drawn away defenders with his run – arrowing in a low effort into the bottom corner.

As the FA Youth Cup tie ticked into injury time, and with a spot in the fifth round secured, the clouds opened up, the sun streamed in – and West Ham United U18s had given themselves every reason to smile at Carrow Road.