David Moyes: Doing the double over Leeds is a great return

David Moyes was happy with the result but not with the performance in Monday’s 2-0 Premier League win over Leeds United.

The Irons rode their luck at London Stadium, with Leeds having two goals ruled out inside the opening seven minutes and David Moyes’ side having to resist a relentless second half onslaught from Marcelo Bielsa’s all-action team.

In between, Jesse Lingard put the hosts in front on 21 minutes when he followed up after Illan Meslier had saved his penalty before Craig Dawson doubled the lead with a trademark header from Aaron Cresswell’s corner six minutes later.

Dawson then hit the post with another header and Pablo Fornals rattled the crossbar with a long-range shot, while Leeds missed a succession of chances, with Patrick Bamford and Raphinha the main culprits, meaning West Ham won for the eighth time in eleven top-flight matches to climb back up to fifth in the table.

Speaking to West Ham TV, Moyes was delighted to complete a Premier League double over Leeds, but admitted his team could have played far better, particularly in attacking areas.

I’m not happy with how we played at all and the players are aware of it, but the big thing was that we got the win.

We had a few dips and we’d had ten days off, but it looked like we’d had three weeks off when we first came out, so that’s something I’ll have to look at and think about.

We’ll have to make sure we’re better and go again.

We had a good performance at Manchester City and we didn’t get a result, so sometimes that’s the way it goes and it isn’t always straightforward.

It was great for the lads, though, because to play Leeds United twice this season and take six points off them is a great return, because they are as tough a team as anyone to play against, as you can see from their results throughout the season.

They are number one for all the running stats in the Premier League and it takes a big job to stay with them.

We did our bit by getting ahead and if we’d got a third goal it might have been a bit different and we hit the post and hit the bar, so we had other chances to go in at half-time further ahead.

But I’m disappointed because we didn’t start well and in the first ten minutes, then we got back on it, and then in the second half, while it was 2-0 the next goal was going to be massively important and they were willing to gamble to try and get a goal back and rightly so.

But we got a good clean sheet which wasn’t easy, so we’ll take it and move on.

It might be fun to watch Leeds, but it’s not fun to manage against them!

But I didn’t like the way we handled the ball, as we didn’t pass it well enough and we didn’t retain possession and our forward players were disappointing as we didn’t build things up the way we’d worked on it.

We worked on it for a long time in the build-up and we certainly didn’t show it. 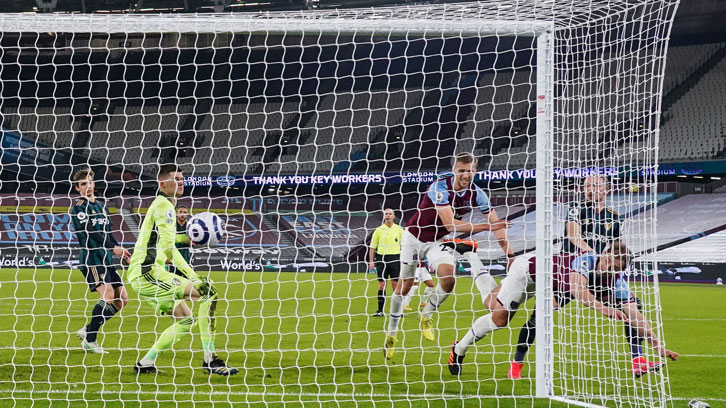 Craig Dawson has always been known for what he can do and he attacks the ball so well, so he’s done a really good job for us.

When you think he came in at Southampton just after Christmas and stayed in the team, he’s been very good in lots of ways – his experience and his goals have been great for us, they really have.

If you’d given me the last three games at home – Sheffield United, Tottenham and Leeds United – and said we’d win three of them, I’d have said ‘that’d be great’.

So we’re plugging along and trying to make the London Stadium somewhere we win regularly and go about our job the right way.

We go to Manchester for the third time in a short space of time on Sunday and we’ll do everything we can to get a positive result.

You only need to look at the players and how they’ve performed all season, they’ve gone into every game and given it a go.

Again, I can’t promise anything but we will do our best to go there and get a result, that’s for sure.