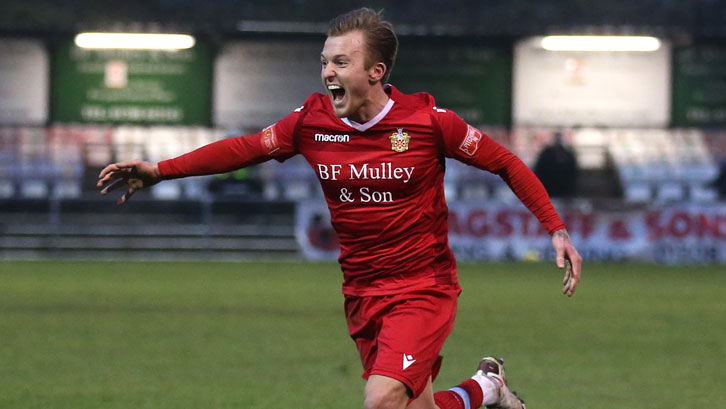 The Urchins have won six ties to reach the semi-finals of the FA Trophy, the premier knockout competition for non-league clubs, including upset victories over National League sides King’s Lynn Town and Maidstone United.

A superb 2-1 win at National League North club Darlington on Saturday means Hornchurch, situated in the Hammers heartland just a few miles from the Club’s Rush Green and Chadwell Heath training grounds, are now just one victory away from a trip to Wembley.

Hornchurch has long held links with West Ham United and its fans, with the club close to Joint-Chairman David Sullivan’s heart after growing up in the town.

Click here to help Hornchurch FC get to Wembley!

With many local clubs deprived of vital matchday income after their respective leagues were suspended due to the COVID-19 pandemic, covering wages, travel and other costs has become a real challenge in recent months. Hornchurch are no different, with their own Isthmian League suspended since early November.

After a pre-match overnight stay helped the non-leaguers prepare ahead of their win over Darlington, the Urchins have appealed to the wider football family to help cover the £2,500 cost of travel and hotel rooms ahead of their semi-final in Nottingham.

As the leading club in east London, West Ham has regularly supported local non-league teams, hosting reserve and women’s team matches at Thurrock, Bishops Storford and most recently Dagenham & Redbridge, while also sending a first-team squad to the latter for a fundraising match in 2018.

Mr Sullivan made a sizeable donation to Hornchurch before their quarter-final tie and has again followed suit with a further contribution as the Urchins look to reach Wembley!

The Joint-Chairman said: “I grew up in Hornchurch and I remember going down to watch them play at Bridge Avenue when I was a boy.

“As well as being a West Ham fan since I was eleven, I have always been a big football supporter and someone who wants to help local clubs where I can, and I know many of my fellow Hammers feel likewise and went to watch their local non-league teams when the lockdown restrictions were lifted last year.

“What Hornchurch have achieved already is amazing and they are now just one win from the biggest day in their history – a Wembley final – so let’s all get behind them and help an east London club lift a trophy!”

To make a donation and help Hornchurch get to Wembley, click here!