As David Moyes celebrates signing a new long-term contract with West Ham United, we take a look back at ten moments of magic since he returned to the London Stadium dugout in December 2019...

1. A winning return in his first game back

West Ham United found themselves in a tricky Premier League situation when the Club put the call out for David Moyes to return as manager in December 2019.

A run of just two wins in 13 matches had seen the Irons slide towards the bottom three and looking ahead to the New Year with some trepidation.

Defeat to Leicester City four days before the New Year's Day visit of AFC Bournemouth saw Manuel Pellegrini's tenure come to an end, but Moyes discovered some goalscoring form from the off, as the Hammers swept the Cherries aside 4-0.

Mark Noble was on target twice, while Sébastien Haller and Felipe Anderson also found the net as the Hammers gave themselves a New Year fillip.

The four-goal show was also a sign of what was to follow under Moyes - six times that season they again scored three times or more, before repeating the feat on eleven occasions in 2020/21.

2. Bringing the squad together in the first COVID lockdown

Despite that lightning-fast start against Bournemouth, the Hammers were still in trouble when the COVID-19 pandemic shut down English football - and much of everyday life - in March 2020.

Moyes' men were just outside the drop zone in 16th place and the Scot recognised the work that had to be done during the lockdown so the Irons were ready if and when the season resumed.

Leading the way by taking a 30% wage reduction alongside other senior Club figures, the savings - supplemented by wage deferrals for the first-team squad too - which supported the entire infrastructure of the Club and enabled the Hammers to retain jobs and continue to pay 100% of staff salaries. The gesture also continued to support the most vulnerable in its community, helping the Players' Project and Foundation initiatives to continue.

Maintaining squad unity with training sessions over video call before they were allowed to resume in-person, first in small groups and later with the full squad, Moyes ensured the Hammers were equipped to hit the ground running when the Premier League restart ensued in late June.

3. Delivering fruit and veg to local people in lockdown

Away from football during the lockdown period, Moyes took inspiration from east London’s historic Spitalfields Market to deliver fruit and vegetables to families in his local community.

At a uniquely challenging time, many contributed, either by making donations or, in Moyes’ case, delivering baskets of healthy food in the Lancashire village in which he lives with his wife Pamela.

Soon, football would return, albeit without supporters present in stadiums, and West Ham United needed points from the off.

The impetus they required to go on and secure Premier League safety would be delivered in spades on 1 July 2020 when the Irons secured a thrilling 3-2 London derby victory against Chelsea.

In a see-saw contest, Tomáš Souček had a goal controversially ruled out for offside moments before Willian gave the visitors the lead from the penalty spot.

Back came the Hammers, with Souček this time scoring legitimately and Michail Antonio nudging his team in front, only for Willian to level from a free-kick.

There was still time for one final twist, when Andriy Yarmolenko broke clear in the final minute, checked onto his left foot and curled the ball into the bottom corner.

West Ham were revitalised, and with big wins against Norwich City and Watford following, plus important draws against Newcastle United, Manchester United and Aston Villa, Moyes' men had done enough to keep their heads above water.

David Moyes and the team were not about to rest on their laurels after securing survival in the Premier League.

With just three weeks between campaigns, before they knew it the 2020/21 campaign would come around and the planning started immediately.

The Hammers headed to St Andrews in the manager's homeland of Scotland during a truncated pre-season, where he posed for this picture with his coaching staff, which now included Stuart Pearce alongside Alan Irvine, Paul Nevin, Kevin Nolan and goalkeeping coach Xavi Valero on the famous Swilken Bridge.

Moyes was focused on ensuring the squad built on their encouraging end to the previous campaign by delivering on a consistent basis and speaking at the time, he was convinced that upward trajectory could be maintained.

"I think the introduction of one or two of the players in January made a big difference, and now we’re needing everybody to step up. We’re going to try and lift those levels again," he explained.

Those levels certainly were about to be lifted.

Most managers will tell you successful recruitment is as big a part of their job as any other - and David Moyes is one of them.

Their success in the role owes much to the players brought in to improve, evolve and lay the foundations for the squad to prosper.

There can be no doubting the value of West Ham's signings since Moyes returned to the Club in the winter of 2019/20, with every single recruit more than playing their part.

From Tomáš Souček's goals from midfield to Vladimír Coufal's defensive steel and marauding raids down the right, Jesse Lingard's remarkable contribution while on loan, Jarrod Bowen's step up from the Championship to revel as a goalscorer and provider, Craig Dawson's sturdiness at the back and Saïd Benrahma's trickery in attack, every one of the signings has contributed to the group.

The team's transformation over the past 18 months has been remarkable, and the new boys have all enjoyed their own key roles.

7. Driving the Club forward in the community

West Ham United is about far more than eleven players on the pitch on a matchday, of course.

The Club's work in the community is a huge part of what we do and David Moyes has embraced that wholeheartedly,

The Players' Project sees players from the men’s, women’s and Academy teams directly work with people from the local community, split into eleven strands, and delivering over 30 programmes that span health, education, community initiatives and football development, which engage with up to 50,000 people per year.

Over Christmas 2020, the West Ham United family came together to support campaigns close to the Hammers fans’ hearts and local projects which helped those most in need in the local community, following the impact of the COVID-19 pandemic.

Moyes' ongoing support means this work continues now and well into the future as West Ham United gives back to east London.

In the midst of the ongoing COVID-19 pandemic, the Hammers' success on the pitch gave some light for their supporters around the world, with Moyes spearheading the charge.

His team possessed the second best home record in the Premier League, only behind champions Manchester City, while the tally of nine away wins was the most the Club have achieved in a Premier League season.

A total of 76 goals hit the back of the net over those nine unforgettable months, so why not enjoy all over them again in the video above! 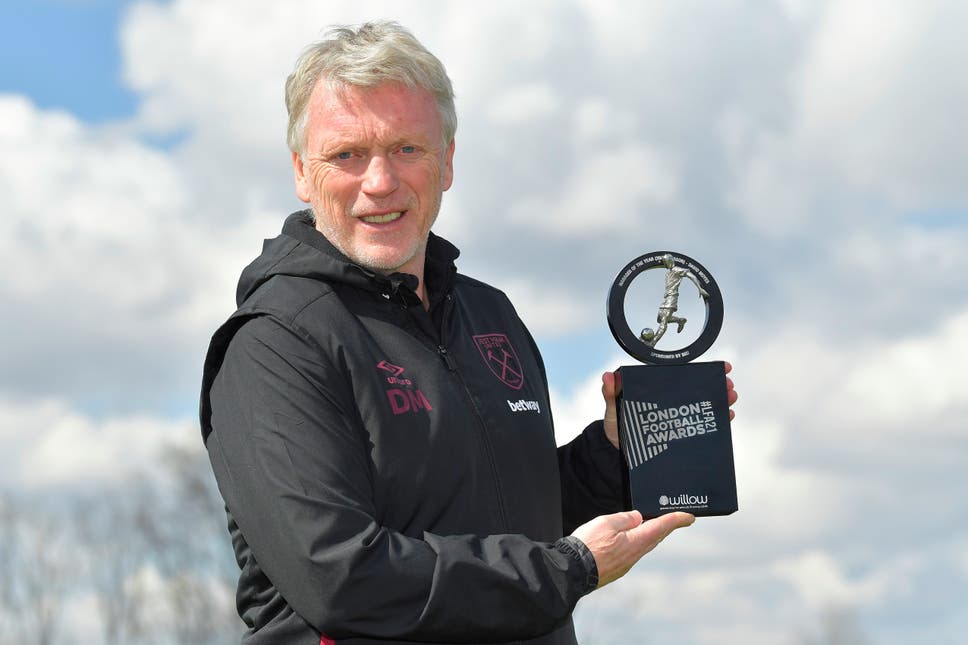 It is not only within the Club that David Moyes' achievements are being recognised.

West Ham's 2020/21 season caused quite the stir around the football world with the manager being nominated for a number of awards.

At the London Football Awards in April, the Gaffer landed the Manager of the Year prize after leading the team's transformation from relegation battlers to top-of-the-table contenders.

He also earned a nomination for the Premier League's Manager of the Year gong, and was shortlisted for Manager of the Month four times, as the wider football community took notice of West Ham's fine campaign.

10. Thanking the Claret and Blue Army

The final game of the 2020/21 campaign was a special one for a variety of reasons.

Not only did the Hammers secure the Premier League achievements already detailed in this article, but 10,000 members of the Claret & Blue Army were able to return to London Stadium to witness it in person.

They were rewarded with a strong display from their team too, with a brace of Pablo Fornals goals plus Declan Rice's late strike dealing a dominant 3-0 win over Southampton.

Following a richly-deserved lap of honour for the team to soak up the crowd's adulation, Moyes addressed the crowd with a lighthearted speech.

“Make sure you’re all vaccinated and get your passports out because we’re going to Europe," the manager beamed.

What a season it had been, and you get the feeling the journey has only just begun.