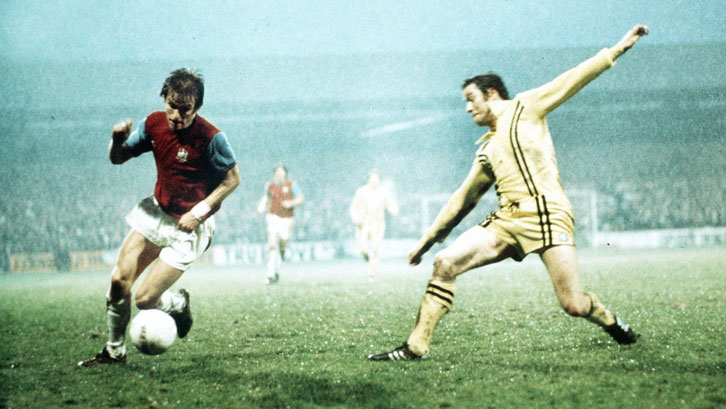 West Ham United have been involved in a fair number of classic cup ties down the years, but few have been more dramatic than the 1976 European Cup Winners’ Cup semi-final meeting with West German Cup holders Eintracht Frankfurt.

The first leg was played at Eintracht’s historic Waldstadion home on Wednesday 31 March 1976 in front of an expectant crowd of 60,000, including a number of travelling Hammers.

Those who had made the trip were cheered by an early goal from their heroes as Graham Paddon collected Trevor Brooking’s pass and thrashed a left-foot rocket past 35-year-old goalkeeper Peter Kunter from all of 30 yards.

Having gone ahead, West Ham spent most of the remainder of the game trying to repel the home side, with 20-year-old Mervyn Day making a series of important saves.

However, Day was powerless to prevent Willi Neuberger from dancing along the edge of the penalty area and rifling a low shot just inside his left-hand post to level on 28 minutes.

Billy Jennings then had a goal disallowed for offside before, two minutes after the break, the West Germans were in front through midfielder Wolfgang Kraus.
Pat Holland then saw another goal chalked off in controversial circumstances, as replays suggested the midfielder did not handle the ball as he challenged the goalkeeper. Rain fell steadily all day on Wednesday 14 April 1976 – so much of it fell, in fact, that there was some doubt as to whether or not the semi-final second leg would go ahead.

Four minutes after the break, though, West Ham finally made the breakthrough they required.

Lampard collected in the inside-left position before curling a cross into the box, where Brooking leapt and sent an inch-perfect header looping into the top right-hand corner.

The tie was level on the night and, as they had done against Den Haag in the quarter-finals, the hosts were set to go through on away goals – but the Hammers wanted more…

First, Brooking launched a perfect diagonal pass for Keith Robson, who was clean through on goal but initially appeared to run past the ball. The midfielder steadied himself, however, controlling the ball on the muddy surface before swinging his trusty left boot at the ball and firing it high into the far top corner, giving Kunter no chance.

With 12 minutes remaining, Tommy Taylor’s quickly-taken throw was played back to him by Paddon and the defender set Brooking away with a fantastic through ball.

“It’s a beautiful pass from Taylor, a perfectly timed run by Brooking. It’s here that he keeps his head, there that he shows his skill and there that he almost certainly makes it safe for West Ham. It’s three-nil now and so much for the Germans to do.”

To their credit, Eintracht did not give in and set up another nervous climax when Klaus Beverungen pulled one back with three minutes to go, but the Hammers would not be denied.

It may be 45 years ago, but the night Brooking and Robson danced through the East End mud will forever be known as one of the greatest nights in Boleyn Ground history.

The first was George Webb, a Poplar-born centre forward who joined West Ham United in 1905 at the age of 17, scoring on his first-team debut against Leyton four years later.

Fast and strong, Webb had played seven times for England’s national amateur team before making his full debut for his country in March 1911, scoring in a 3-0 win over Wales in the Home Championship at Millwall’s The Den ground. He kept his place for a 1-1 draw with Scotland at Everton’s Goodison Park that secured the Home Championship title.

Len Goulden and Jackie Morton were both capped before the Second World War, but it would be 22 years before Ken Brown earned his one and only cap in a 2-1 Home Championship win over Northern Ireland at Wembley in November 1959.

Three years later, Brown’s centre-half partner Bobby Moore made the first of his 108 appearances for his country, in a 4-0 FIFA World Cup warm-up win in Peru in May 1962.

Moore, of course, would go on to not only become West Ham’s most-capped international but captain his country to FIFA World Cup glory in 1966. He would also feature for England at the 1962 and 1970 World Cups and the 1968 UEFA European Championship finals.

In 57 of those 108 matches, Moore shared the pitch with fellow Academy of Football graduate and World Cup winner Martin Peters, and in 44 he lined up alongside 1966 hat-trick hero Geoff Hurst.

The only other Hammer to be capped in the 1960s was prolific forward Johnny Byrne, who had previously been picked while still a Third Division player with Crystal Palace.

Four members of the 1980 FA Cup-winning team – Frank Lampard Senior, Trevor Brooking, Alan Devonshire and Alvin Martin – were capped between 1972-86, with Brooking playing at Euro 1980 and the 1982 World Cup finals in Spain and Martin appearing at the 1986 tournament in Mexico.

Strikers Paul Goddard and Tony Cottee were both capped during the 1980s, but there was a nine-year gap between 1988 and 1997 when no West Ham player appeared for England.

Into the 2000s and West Ham players continued to receive callups, with Paul Konchesky, Kieron Dyer, David James, Dean Ashton, Andy Carroll and Stewart Downing all being capped while with the Club.

Matthew Upson made 14 appearances, including two at the 2010 World Cup finals, where he lined up alongside Irons teammate Robert Green.

And Jesse Lingard made it 43 when he appeared three times for England during his loan spell from Manchester United in March 2021.

West Ham United had a noble pairing during the 1920s, with right-back Alfred Earl playing alongside inside-right Stanley Earle for the second half of the decade!

Born in Earslfield in south London in March 1903, Earl joined the Irons from Summerstown FC in Wimbledon in 1925, before going on to play 206 times in Claret and Blue.

Earl holds the record for the most appearances made by an outfield player without scoring a single goal for the Club!

Thankfully for Earl, his teammates knew where the back of the net was, with the likes of Vic Watson, Jimmy Ruffell and near-namesake Earle all scoring on a regular basis in the late 1920s.

A goalscoring inside-right, Earle netted 58 times in 273 appearances over the next nine seasons, while providing plenty of assists for his prolific teammates.

Having been capped once by England while with Clapton, Earle earned his second cap with West Ham, in a 2-0 Home Championship defeat by Ireland in October 1927.

Prior to January 1998, the vast majority of West Ham United supporters had never heard of the village of Emley, which has a population of less than 2,000 and lies midway between the towns of Huddersfield and Wakefield in West Yorkshire.

However, after beating Workington Town, Durham City, Belper Town, Nuneaton Borough, Morecambe and Lincoln City, every Hammer became aware of the village’s football club when they were drawn to visit the Boleyn Ground in the FA Cup third round.

The 19-year-old Lampard put Harry Redknapp’s side in front inside four minutes, but the floodgates did not open. Instead, the part-timers levelled eleven minutes after half-time through hairdresser Paul David, but their hopes of a replay were cut short when Hartson netted a winner with eight minutes to play.

Regardless, the 2,000 travelling supporters among the 18,629-strong crowd went home proud of their non-league team’s heroic efforts.

The Essex Professional Cup competition was introduced in 1949 and was played each season up until 1976, with the last winners being Tilbury, who beat Southend United in the final.

West Ham United entered on nine occasions and always fielded their first team. The Hammers reached five finals, won the cup twice and shared it once. 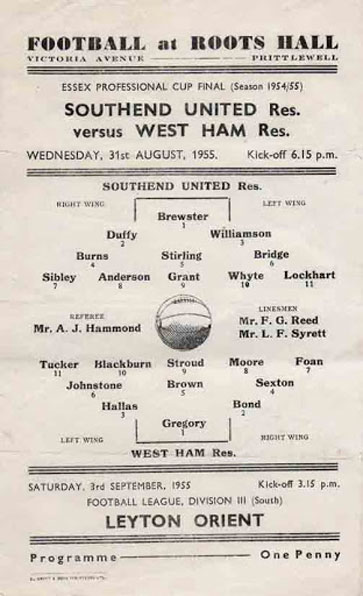 After hosting the first final in 1950, between Leyton Orient and Southend, the first of West Ham’s five finals came in May 1951, when Irishman Tommy Moroney and future assistant manager Bill Robinson scored in a 2-0 win over Southend at the Boleyn Ground. The Hammers team also included Malcolm Allison, Frank O’Farrell, Harry Hooper and Jim Barrett.

After losing to Colchester United in the 1952 final, when Barrett scored in a 3-1 defeat at Layer Road, the Irons were eliminated from the 1953 semi-finals by Leyton Orient on a coin toss!

The 1955 final, played in August, ended in a 3-3 draw with Southend at Roots Hall, where Brian Moore, Alan Blackburn and Ken Tucker were on target, and the trophy was shared.

Three years later, and a week after securing the Second Division title and promotion back to the top-flight after a 36-year absence, Ted Fenton named John Dick, Malcolm Musgove, Andy Nelson and Billy Lansdowne in the team to face Chelmsford City in the final at New Writtle Street, where the Southern League side ran out 5-1 winners.

West Ham’s fifth and last final was in September 1959 and ended in a 4-1 win over Leyton Orient at the Boleyn Ground. An own-goal and strikes from Noel Cantwell, Ron Brett and Dick did the damage.