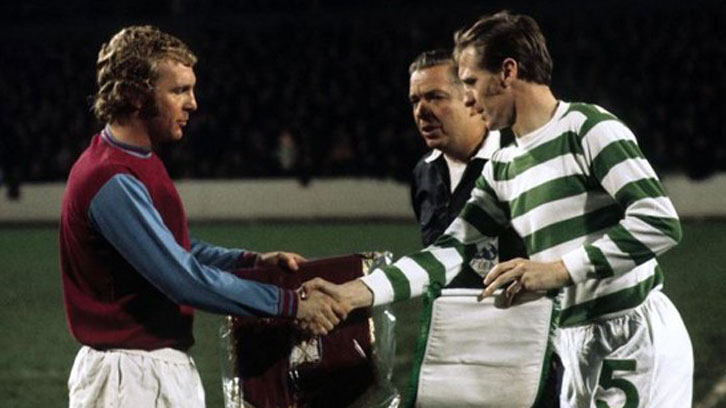 The evening of 16 November 1970 saw the Boleyn Ground lit up by visit of the Scottish giants for a game that no fan who attended will ever forget.

On the night, Moore was honoured by nearly 25,000 supporters eager to pay tribute to, at that point, the only player to raise a major trophy in Claret and Blue, and the man who had led England to FIFA World Cup glory just four years before.

The defender was also just a few months removed from another outstanding display on the world’s biggest stage, when his immaculate tackling and post-match embrace with Pele were the highlight of England’s narrow defeat by Brazil in Mexico.

Moore’s outstanding performances caught the imagination of his fellow professionals and the wider football public, too, with the Hammer being named runner-up for the Ballon d’Or and third in the BBC Sports Personality of the Year voting. 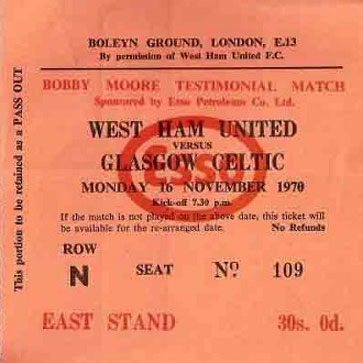 The Testimonial itself broke new ground, with the unique arrangements for the game being handled not by West Ham, but by fuel suppliers Esso.

Among the topics handled by Esso was attracting top-class opposition and, in 1970, they did not come much bigger than Celtic.

The Glaswegians had become the first British club to win the European Cup in 1967, beating Italians Inter Milan in the final in Lisbon.

Three years later, they reached the final again, only to be edged out 2-1 after extra-time by Dutch champions Feyenoord.

Seven of the legendary Lisbon Lions were in Jock Stein’s side at the Boleyn Ground, including goalscorer Tommy Gemmell, captain Billy McNeill and the winger Jimmy ‘Jinky’ Johnstone.

Unfortunately, Trevor Brooking and Billy Bonds missed the game through injury, while Martin Peters had moved to Tottenham Hotspur in a swap deal involving Jimmy Greaves in March of that year.

Celtic went ahead three times – through Bobby Lennox, Johnstone and George Connelly – but, led by the irrepressible Moore, West Ham roared back on each occasion.

It was from the defender’s cross-field pass that Geoff Hurst scored the Irons’ first equaliser, followed by second-half strikes from Ayris and Best.

Johnstone should have won it for the visitors in the final seconds, but his shot flew over the crossbar and West Ham held on to secure a share of the spoils. 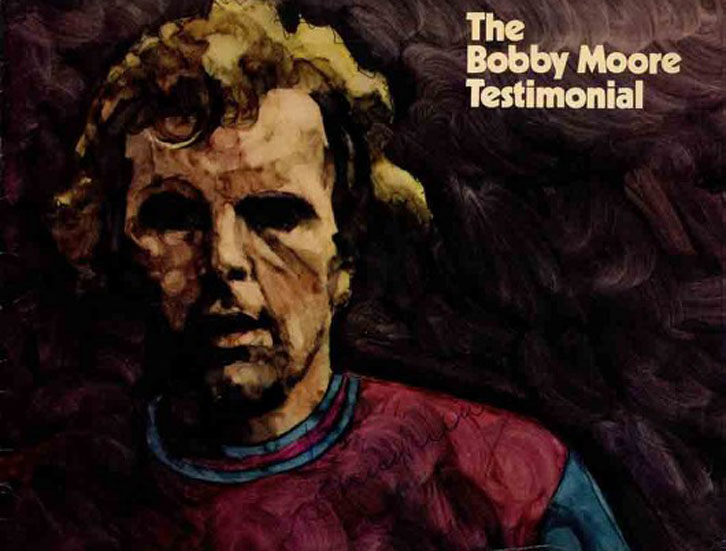 “Bobby Moore, England’s captain, had the glory of his Testimonial match at Upton Park stolen from him by a memorable display from Celtic, who last night paid their first visit to London for 12 years,” wrote Daily Telegraph reporter Robert Oxby.

“Ignore the score line. Celtic, playing with the flair that has made them such a force in world football, out-classed the Londoners.

“The match was played in a fearfully competitive spirit – perhaps the most fitting tribute to a man who, by common consent, is regarded as a model professional.”

The Testimonial reportedly earned Moore £12,000, but the true value of this memorable moment in the career of West Ham United’s finest-ever player was surely far greater.